About Becky Oberg, Author of "More Than Borderline" Blog

I think the name "More than Borderline" is an excellent name for the blog, especially since so many mental health professionals will dismiss people with Borderline Personality Disorder (BPD) as "just a borderline". 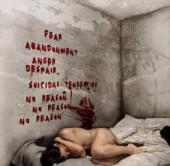 As for me, I was hospitalized for depression for the first of many times in 1998, while a sophomore at Baylor University. After graduating with a B.A. in journalism, I returned to my native Midwest and was diagnosed with borderline personality disorder, possibly as a complication of post-traumatic stress disorder. Simply put, I was stuck in my past and destroying my future to survive my present. One therapist even told my family--in front of me--"She'll drift in and out of institutions her whole life until they're tired of treating her."

Desperate to avoid filling that prediction, I moved to Indianapolis to get more comprehensive mental health treatment. However, I did not know how to manage my BPD symptoms, and the stress of living on my own made things worse. Eventually, I was placed on the wait list for the inpatient BASE (Borderline Awareness and Skills Empowerment) program at Larue D. Carter Memorial Hospital. However, while waiting to be admitted to this program, a psychiatrist made a mistake that nearly cost me my life. When I demanded an explanation, he replied that he'd assumed I was just a borderline, just trying to get attention--after all, that's what the last borderline he'd treated did.

I was in the BASE program for nine months. The program was so effective that within a year of my discharge, I was living in a cluster apartment and working as a freelance health reporter.

More About Me and the More Than Borderline Blog

My Borderline Journey: I've Learned A Lot Along the Way

I am deeply involved in my faith community and consider it a blessing. My hobbies include reading, writing (poetry, fiction and non-fiction), playing video games, and shopping at farmers markets and fair-trade stores.

APA Reference
Oberg, B. (2010, September 27). About Becky Oberg, Author of "More Than Borderline" Blog, HealthyPlace. Retrieved on 2022, September 25 from https://www.healthyplace.com/blogs/borderline/2010/09/about-becky-oberg

Becky, I'm in awe of your bravery and courage. Sharing this intimate part(s) of yourself can't be easy (I know from living/married to someone with BPD - extreme denial, blaming everyone else, devastating rage fits, etc.)
My question to you, though, is if someone with BPD adamantly refuses to admit there's anything wrong with them, despite it being blatantly obvious to everyone (including the person with BPD - can see it in their actions, behaviors after a rage episode), how to you get them into treatment?
The couple's counselor (who was filled in previously by the psychiatrist) took us separately for the first visit. He took me in first and dropped the atomic bomb into my lap. He told me straight-up, to end the marriage immediately and move on. He said there was very little hope of ever having a normal adult relationship with this person.
At first, I wanted to stay. I was still in love and married! Now, I know I certainly have developed PTSD. I am extremely exhausted every, single day of my life, now. To the point of not being able to really function.
The rage fits, name-calling, all the mental, verbal, sometimes physical abuse has worn me down so low, I didn't even realize it, until it was too late :(
I guess I should have heeded the therapist's warning and advice? Yet, I still have a sliver of sympathy, knowing this is a mental illness (a very serious one) and this person could get better (if they weren't in such denial!)
Do you think there's any hope in my situation? My spouse is 50 years old and has had a history of broken relationships. That doesn't mean they're not able to still be helped but the patterns are so deep-seated...I worry it truly is a hopeless case, for everyone involved.
~ Wife, living on edge, walking on eggshells, enduring the blows caused by BPD, every, single, day, for the sake of the love of her life...while simultaneously losing my life, myself :(

I cried when I read about your experiences of disassociation. Because I feel the same. I disassociate when under stress and nobody understands me. Nobody gets it... And sometimes my perception of space and objects change. My hearing too... I look into a mirror and a see a foreign face. Its like a false copy of me. Like plastic. I just want someone who understands what I'm going through

Hi Becky. I don't know if you would even remember me but we were in BIC together at Baylor. I was just reading through the BIC newsletter and saw your interview.
You are right about the military putting a stigma on mental health. I came back in to the Navy in 2007 and was deployed to Iraq for 6 months and Afghanistan for a year with the Marines and had a lot of Marines getting out because of mental illness, not just PTSD. I'm at a clinic now and we see a lot of young kids, straight out of boot camp, coming through with all sorts of issues, and they end up being separated. We did have someone recently commit suicide as well.
Great blog. Good luck to you!!

The Last Door Recovery Centre produces a radio show called "Talk Recovery". The show focuses on recovery and addiction issues and airs live every Thursday on Co-Op radio 100.5 FM from noon to 1 pm. We are now into Season Two of the show
"Talk Recovery" would like to invite you as a guest on the show to discuss Alcoholism & BPD.
Are you available to be interviewed on July 10th, 17th or 24th?
We can schedule the show by email or you can call me at 604-525-9771
Show Outline
• In studio 11:45
• One on One Interview for 15 minutes
• Group Discussion for 30 minutes
• Commercial breaks take place in between interview
• Show ends 1 pm
• Option to do a call-in Interview available for out of town guests.
Talk Recovery Radio Show is powered by Last Door Recovery Centre and pushed in Last Door’s Social Media Network, which includes Sound Cloud, Facebook, Twitter and LinkedIn. Each week we promote our show with paid reached marketing which targets between 3,000 to 5,000 unique users. The show gets downloaded on average 200 times a week, and the number of listeners on the radio is unknown. We feel confident the show’s weekly reach is 5,000 people.
The Show’s logistics
• Talk Recovery airs every Thursday on Vancouver Co-Op Radio 100.5 FM from noon to 1 pm
• Guests can be live in studio or on call in
• Past Shows http://www.lastdoor.org/talk-recovery/
• Main Facebook push pages are www.facebook.com/LastDoor and https://www.facebook.com/TalkRecoveryVancouver
• We are currently in Season 2
Hopefully these dates work for you, if not, what Thursday would work?
Thanks,
Brendan Hunt
Community Development
Last Door Recovery Society
www.lastdoor.org
www.facebook.com/LastDoor
www.unityapp.net
Office phone: 604-525-9771

hello becky,
i can complete agree with you,
we are not our illness,
and that the first difficulty with medical doctor...
once I run away, after a lady doctor told me, that she had face of her a neurosis anxiety....!
talking to the students (5)in her back...
i was under the shock, so , in europe it is not easy either, to start to have a treatment....
I will try to find some more hope with you,
here,. and i thank you for being there.
chris

Hi, when I read your experience on Basic training I feel so identified, because the same thing happened to me, on the fourth week of the training I was send to the hospital for 5 weeks because a supposed nervous breakdown, and resieved a discharge.

Thank you for sharing. Yeah, the military definitely attaches a stigma to mental illness. At the hospital they told me "Once you end up here, you're enlistment 95 percent of the time is over."

Thank you Becky for an excellent blog and excellent audio blogs. You have great information and it is really helpful!

Hello Becky, You're amazing. Your story has been a beacon of hope for me as a young man struggling with Borderline personality disorder, and as a Christian. God Bless you!

Thank you. Sadly, the church is often not a sanctuary for people with mental illness. But I believe the more people who speak out and tell their stories, the more that will change.

Hey Becky -
I'm so happy for you! You make me smile!! My ex-wife, who is Borderline, refused to get help. It was a horrible marriage. You are an inspiration my dear! :) Take care...

Hello Becky,
I have a few questions, is it possible to have your email?