Is Locking Up People with Borderline the Answer?

Sadly, one of my previous posts can be recycled. I wrote about whether or not people with severe mental illnesses should have firearm rights after the events in Aurora, Colorado (Should People with a Mental Illness Have Firearm Rights). Now there's been another killing spree in which mental illness may have been a factor. I would not be surprised if Elliot Rodger had a diagnosis of borderline personality disorder (BPD)--his difficulty in relationships and inappropriate anger are two symptoms of the disorder. It raises the question, "Is locking up people with borderline the answer?"

Why the Answer is Legally, "No"

Rodger was visited by the police shortly before his rampage. His concerned parents had called the police regarding videos threatening violence that he'd posted on the Internet. The police, however, never viewed the videos. They also did not search his apartment for the guns he would later use. Without enough evidence to prove he was a danger to himself or others, the police concluded he was safe and left. Like it or not, that's been the law since the Supreme Court ruled that it was unconstitutional to hold people with mental illness against their will if they were not a danger to themselves or others. The result--thousands of psychiatric patients were released from institutions. Many of them ended up homeless or incarcerated, resulting in the current fragmented mental health system we now have. I threatened to commit suicide by police one time. I was immediately put on an emergency detention for 72 hours and the authorities were notified. That's what should have happened to Rodger. It may not have been legal, but it would have been moral.

Why the Answer is Morally Questionable 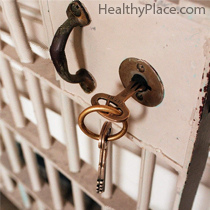 There's a saying that goes something like this: "What is legal is not always right. What is right is not always legal." Forced treatment is a perfect example. People with mental illnesses such as BPD have rights, but with those rights comes responsibilities. For example, we have the right to live in the community, but with it comes the responsibility to comply with treatment. Sadly, people with BPD are not always treatment-compliant. Before I was committed to a residential facility, I had trouble remembering to take my medication. I also drank heavily. This made me unstable and occasionally dangerous. That's why I was locked up. But I was allowed to deteriorate for years before I was involuntarily committed to the borderline unit at Larue D. Carter Memorial Hospital in Indianapolis. I just wasn't sick enough. And that's morally questionable. There are thousands of people who would benefit from hospitalization, but they don't meet the criteria of dangerous or gravely disabled. So they end up in our prison system or on the streets. The largest provider for mental health services in Indianapolis is the Marion County Jail; the largest provider should be a hospital. Locking up people who might be dangerous may not be the answer legally but is it the answer morally?

Reflections on Being Locked Up

It's embarrassing to admit, but I don't know how many times I've been hospitalized. I stopped counting after ten. I needed intensive, inpatient treatment, but for a long time, I wasn't sick enough. It was only after I was averaging a hospitalization every other month that I finally got the treatment I needed. It was involuntary--but it worked. Sometimes the law hurts more than it helps. That's the case now. And until we're willing to re-evaluate our criteria for hospitalization, we'll have more mass killings like what happened in California. Until we're willing to fully investigate threats, we'll have more mass killings. And the last thing we need is another mass killing.

APA Reference
Oberg, B. (2014, May 27). Is Locking Up People with Borderline the Answer?, HealthyPlace. Retrieved on 2022, May 17 from https://www.healthyplace.com/blogs/borderline/2014/05/is-locking-up-people-with-bpd-the-answer

Can We Forgive When There Is No Justice?
An Open Letter To My Former Church About Mental Illness
Sinead
October, 6 2021 at 1:18 pm

As someone that was given this diagnosis I think it would benefit me and society if I was in an inpatient facility for the rest of my life. It would be humane. I do not see a stigma to it.

Your blog only adds to the stigma attached to people with diagnosis of BPD...I am saddened that you would even bring up the question stated in your blog...Just think of the negative ramifications...who adds names to the list? Who keeps this list? Public view? Who would hire anyone on a list like this? What if your name was on this list by mistake, or wrong diagnosis? Please, before you put out a blog for public viewing ask your self if you might be adding to the problem...sometimes just the suggestion that ALL borderline have potential for killing people can be taken entirely wrong. And I think you will agree, there are far more people diagnosed as Borderline than there are killing hundreds of people.

I have a very very mentally ill mom. I need help & just don't even know what to do. I'm not even sure what her disorder really is, I've been going around & around & around with her since 1982! She needs a hospital & needs it badly! If there is anyone who can please give me some direction, I will take it & run. She tells her psych. doc what she is & is not going to do & is now off all meds! She is out of her mind. My step dad is much older & in bad physical health, my mom is in excellent physical health just has checked out in her head. The woman I have known as my mom is completely gone. She can't get out of a chair for days & she has been diagnosed as bi-polar but she has voices in her head she has names for & she's humming & talking to herself to drown out the voices. She says there is a "tape" playing in her head all the time. What does any of this mean? Her doc just writes a script & out the door & now had decided to take the summer off of meds! She came up the coast of FL to visit, we are 5 hr. drive apart, she was here a week & was taping things together with surgical tape, random objects & putting odd things in the fridge & collecting glass jars & doing just bazaar things. I told my dad help me or get out of my way! She has great insurance since he is retired military, she will get full Medicare health benefits this Nov. as well. There is always an excuse why she can't go to the hosputal. If I could get her on a psyc. hold, any doc after speaking with her for 2 minutes would know, this lady is extremely ill. I need & beg for help. I am an only child & have noone but my dad, mom & husband. Please please help. She lives in Key Largo where docs are few but there is Miami. Anyone know anything about services there? I'm almost paralized because this is so much & landing all on me or I can watch her slip away, just like her grandmother did & she went totally catatonic. I'm desperate, afraid & lost. I want to save my mom & this is wayyy bigger then me. Thank you so much for reading. God Bless.

I compliment you on your willingness to bend a rule to do the right thing and I regretfully disagree.
The equal protections provided in the Constitution protect all citizens from having the law applied unfairly against them. Mentally ill people have rights, the same rights as other people.
You could propose legislation to force evaluations for hurting one's self or another person to a lower level. So that confinement is mandated at a lower level of threat.
I am like the Founding Father's in that I do not trust the government to not abuse its power. In theory the government could say that breaking the law is a sign of mental illness and lock up political groups like the 99 percenters for sleeping in city parks.
50 years ago our government answered to the people, now I don't know who they answer to.