Schizophrenia and Success: Why Not? 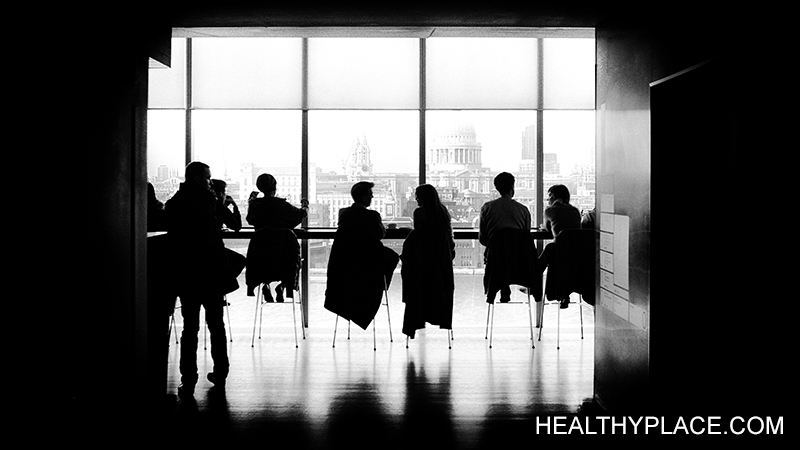 Sure, it's not the story you usually get in the media: Someone with a diagnosis of schizophrenia or schizoaffective actually has a life. This person loves, works, contributes, has useful skills - and is an active participant in his/her own treatment.

But in the NY Times this week, Benedict Carey's article is there on the front page: Lives Restored:A High-Profile Executive Job as Defense Against Mental Ills.1 Keris Myrick, 50, the chief executive of a nonprofit organization, has found ways to manage her illness - and thrive.

Will this happen for my son, Ben? I don't know - but I can hope. I can't expect, but I will dream. For, right now, there is progress in his life that I hadn't dared to dream about even one year ago.

The comments on the article range from supportive and grateful to disbelieving and discouraging. Everyone's got to be somewhere. As for me, this was my response:

My son has schizophrenia. 14 years ago everyone thought he was headed to Yale Law School and a fabulous career. Ten years ago, I prayed he would survive five months of homelessness and wandering in the Northwest. Eight years ago, he was hospitalized five times. One year ago, he was back in college part-time, and on the Dean's list every semester (and it mattered to him). I thought that might be as far as he might be able to succeed, and it was still amazing.

This year, he surprised us all by landing a job - and keeping it. Employment has made a huge difference in his self-esteem, and is rising to meet the challenge (supported by the right medication, friends, family, and professional input.) He may not be an executive, but it could happen. This article is an inspiration - and a call for respect, research, opportunity, and understanding. Thank you!

~Randye Kaye, author Ben Behind His Voices:One Family's Journey from the Chaos of Schizophrenia to Hope (Rowman, Littlefield, 2011)

Ben's life did not end with his illness, nor did it freeze after his diagnosis. Change is constant - sometimes two steps back, sometimes several steps forward. But things do evolve, and not always predictably.

Success with Schizophrenia Is Very Possible

Our current situation, after this summer's setback, involves Ben's maintaining his apartment but spending more time with the family as we help him re-adjust to post-hospital life. His schedule includes the familiar: school, work, and his "Anonymous" meetings in his apartment neighborhood. But we're going to have to make a change in Ben's meeting locations, because he is now terrified to go into that neighborhood.

Why? Last week Ben was mugged. Mugged, complete with a knife held to his neck and an injured shoulder from being thrown to the ground. Thank God he is physically okay, except for the shoulder pain. It could have been so much worse. But we are all left with the post-shock fears: what if they found out where he lives? what if they do it again? Ben, who was attacked after getting off the bus, hasn't been able to ride it again - yet.

But he will. We have learned that he has more resilience than we, or he, had previously realized. He only took one day off from work, and is back at school after re-purchasing the textbooks that were stolen from him (and, I bet, tossed in the garbage).

Ben has shown incredible strength this week. Anything is possible - with the proper treatment, attitude, and support. We continue to appreciate what is good each day - and hold our breath just a bit more lately.

APA Reference
Kaye, R. (2011, October 25). Schizophrenia and Success: Why Not?, HealthyPlace. Retrieved on 2020, October 29 from https://www.healthyplace.com/blogs/mentalillnessinthefamily/2011/10/schizophrenia-and-success-why-not

All of these stories are heartbreaking but hopeful. I am mentally I'll, on medication and have been stable for almost 8 years. But my situation is different from yours. I went into the hospital on November 8, 2004. Two weeks later I was discharged and had to move into the only place I had to go - my mentally I'll mother's house. I started outpatient treatment and was just starting to make progress when mother decided to move 70 miles away. I was devastated, but at least I had my best 4- legged friend, Shiloh. I started over here, but due to budget cuts and this being a smaller town, there was no outpatient treatment center or much else for that matter. I was lucky enough to find both a wonderful psychiatrist and a fantastic therapist. I have made great progress, but I am still stuck with that mentally Ill mother and now also her grandson and his girlfriend. Mother has always been abusive in many ways, but these two have been down vicious. They hurt,tormented, scared,bothered, annoyed and did everything in their power to my companion dog of eight years, that he became so terrified and neurotic I had to have him euthanized 3 weeks ago. Since then it has been much worse. Mother is both stealing money and demanding more rent at the same time. She continually threatens eviction and/or locking me in my room. All of this over all this time because I haven't been able to get housing of any kind. I have inquired continually, I just wrote a desperate email to the top guy in public housing as I have found phone calls and personal visits make no impression.
I don't know if there is anything you can do for me, but I figure if I tell my story in enough places, somebody who can help me just might see it. I can't just stay here and do nothing!!

Hi Christine -
Thanks so much for sharing your story, and I sincerely hope there are some options out there for you. The lack of outpatient services and housing is a huge issue, and sadly does not yet get the attention it deserves.
As you see from my posts, I am generally a big advocate of including the family in the treatment and recovery process; however, that assumes that the family is in a position to be helpful and not harmful. Kudos to you for getting the treatment you need, despite the fact that your mother has not.
Do you have a social worker or case manager who oversees your treatment?Sometimes they have more klout with public housing than you or I might, and are more familiar with the system. Does your therapist have any ideas?
I wish you well, and congratulate you on your success so far. Sometimes, when our families of origin are not in our corner, it is best to create a new "family" of people who are.
Hang in there. Any other ideas, readers?
Randye

Hello Randye, I really enjoyed reading your blogs....my son was always a" Painin the ass" kid growing up....of course now I see that this disease was coming up on him....he would hit his sister and our family life was a roller coaster...always trying to keep the peace.....he tried so hard...graduated college, got a series 7 stock broker license, a real estate license and also was seeing a burning bush in the corner of his room.....I tried tough love and kicked him out in a snow storm a week before his birthday....how could i have done that....but he was so obnoxious I couldnt stand him....now I see the pain he was in and my heart breaks....he has been hospitalized for 6 years and I think he is coming back....I wish I oculd get him back his friends,but he is 39 and that is not possible....I try to be cheerful but it is so hard....

Hi Rita. Oh, that all sounds so heartbreakingly familiar. As I learned in NAMI, "you can't know what no one has told you" - and we certainly could have no idea at the time that our sons were developing schizophrenia. I, too, tried ToughLove. The original title of my book (Ben Behind His Voices: One Family's Journey from the Chaos of Schizophrenia to Hope) was "To Hell and Halfway Back" - research is not yet at the point where we have our loved ones back 100%, but there is some hope to go on with our new realities - and that message is a big reason I blog, and why I wrote the book.
I wish you all the best, and encourage you to keep reading and learning here at Healthy Place, NAMI, and elsewhere. Education is what saved me from hating my son and giving up in desperation. NAMI Family-to-Family was really helpful, as were the stories of others who have been there. You are not alone.
Randye

[...] along so well these days. Much of it has to do with Ben’s self-esteem having returned to his “baseline functionality” after this summer’s relapse. So, I feel comfortable enough to start the following exchange:Ben: “Wow, Mom, that’s a [...]

Hi Randye,
Thanks for such an enlightening and positive message of hope. I'm so glad people share their personal stories, they are truly one of the greatest tools/aids in helping others to understand and get educated.
I'm so glad Ben is okay and more resilient than you all expected. It's a scary world we live in where you can be minding your own business and someone jumps out and threatens you, mugs you and goes unpunished in many cases. I'm glad this did not result in a relapse for Ben, and that he wasn't injured too badly physically, but the cost could have been and may still surface from an emotional and mental standpoint.
Ben sounds like an amazing young man with an equally amazing, loving and supportive family.
Take care, Barb

Thank you, Barb. He is rather amazing, and I'm so grateful it wasn't worse.
Randye

I am so sorry to hear about Ben being mugged; he must have been terrified. And what makes me really upset is that the media so often portrays people with mental illnesses committing crimes, when in fact those with mental illnesses are more likely to be the victims of crimes.
I really admire that Ben was able to first take care of himself by taking a day off, and then continued on with his life and not let this ruin everything for him. It speaks of a lot of strength and fortitude, and you must be very proud of him.
Angela E. Gambrel
Surviving ED

Hi Angela - you are right. I've always heard that statistic about being a victim of crime, but it's alwasy entirely different living with it personally. I am really proud of Ben - and relieved! Randye

I wonder if you've checked out my novel, Memoirs From the Asylum?
http://www.youtube.com/watch?v=WGyl0JMTEJ4

I checked out the trailer - spooky! how it it doing?

Schizophrenia as emblem of psychotic disorders could be cured by simultaneous biologic, psychologic and social intervention and treatment. The main intention is to return life abilities that are damaged during psychopathological psychotic process. In other words this is called the process of rehabilitation and resocialization as well, that lasting long time. In spite of that, from time to time the disease flourish with their characteristic psychotic symptoms, that is called relapse. This is specific course of schizophrenia. The afore-mentioned psychiatric treatment should promise the successful evolution of this serious mental illness. Because this accomplishment is very hard to achieve, it ought to include the family, the psycho-social environment as supportive element to schizophrenic patient. Otherwise, the process of recovering would be unwillingly expectancy.

thanks, Dr. Ferati. Your comments are always precise and factual.
best,
Randye

"Sometimes we just have to be flexible..." Ben, you and your family are an inspiration. Thank You.

thank you for commenting!
Randye