Psych Med Non-Compliance: Why Won't He Just Take The Pills? 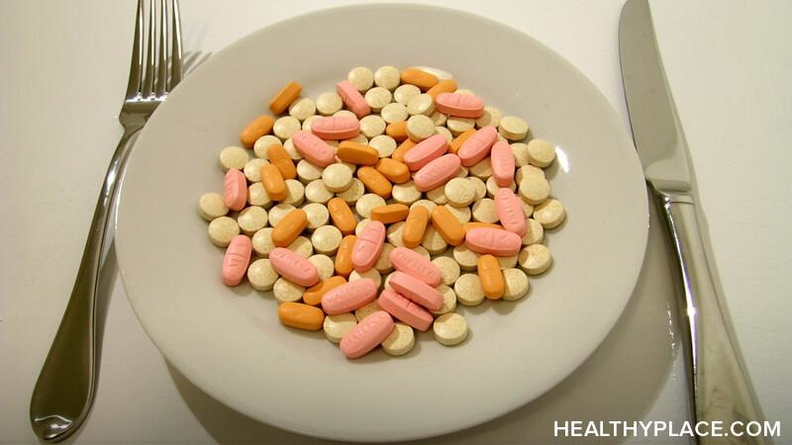 Ever since my son's diagnosis of schizophrenia, we have had to work around his strong desire to live without his mental health medications. In the past, he has refused them, cheeked them, thrown them up after swallowing them. They've been hidden in his pockets, his closet, in the bottom of the garbage. Things are better now, but mostly because we are on to his tricks. I'd like to think he is cooperating because of some insight--but the most probable reason is that he simply can't get away with not taking his psych meds anymore.

Every medication trial, in the early years after his diagnosis, was compromised because we could never be sure if he was taking the full prescribed dose. Every one of his hospital stays has been extended because of medication non-compliance. Each of the three relapses he has suffered after stabilization has been because he somehow stopped taking his meds.

Why? How many times I asked myself that question. To anyone else, it would make sense, I told myself. But, finally, I learned some truths: Ben does not agree he has an illness - not yet. The medical reason is a neurological syndrome called anosognosia, the inability to recognize a mental illness in oneself. It occurs in 50% of those with schizophrenia, and about 40% of those with bipolar disorder. Although this awareness sometimes improves when stabilized on medications, that has not yet happened for Ben.

So my job, I have learned, is not to convince Ben he has schizophrenia. In all my conversations with people who do have this awareness and manage their own medication regime themselves, no one has ever said to me "My mother finally convinced me I have schizophrenia." Not one person.

So my job right now is just to require that Ben take his psych meds whenever he stays with us, and keep any other caregivers and case managers aware of the need to supervise carefully - and with empathy. Ben is not just being stubborn - although he certainly can be! It is not our place to judge him - just to make sure he does what he needs to do until the time he has that aha moment - if he ever does. Whatever. In the meantime, wishing doesn't help us - but staying in the moment, and doing what must be done, does.

What To Do About Psych Med Non-Compliance

But - it helps to understand why many people may not want to comply with their psychiatric medication regime. So:

Some reasons for medication non-compliance:

What you usually can't do: Convince your relative, by reasoning and arguing, he or she is "sick" and needs to take the medications.

What you can do:

For all of this to happen, by the way, open communication and partnership, whenever possible between consumers, caregivers, and healthcare providers is essential. Insist on it, in whatever manner you can.

Thank you for this article; it's very beneficial for those dealing with relatives who have some psychological disorders. I wanted to take your advice concerning a problem that I'm dealing with now with my Schizophrenic father who is also suffering from subacute Bipolar Disorder.
My father has recently left the house and he doesn't want to to return back anytime soon, he also refuses to believe that he has any type of psychological disorder and therefore he won't take any medication.
How can I help him take this medication without him knowing until I can get him to come home then we can discuss his illness together?

Thank you for this article. It is well-written. I have seen the "before and after" situations of people who have mental illness, and how horribly delibitated they were before they began to take the medication, and, how the meds stabilized them. Yes, I know the meds do not cure them but they do stabilize and calm them and allow them to get treatment through therapy and counseling and not have manic ups and depressive downs and have "crazy episodes" that land them in the hospital. I am disgusted at the "Anti Psychiatric" community which is always going against pharmaceutical medications.

we have been struggling with our 31 year old son regarding medications for the past two years. We are now contemplating conservatorship but am wondering once one becomes a conservator how does one go forward with enforcing the requirement that the conservatee take medication. Is there the threat of being hospitalized again? Or jail? Not sure how conservatorship works. Looking forward to explanation. Thanks.

Hi Nancy -
The laws vary from state to state, so best to contact a lawyer or your state NAMI office as a way to begin. In our case, we were able to apply while our son was hospitalized, as we could prove "grave disability" more easily. Once conservatorship was granted, we could petition for "right to medicate" but only as long as our son was in the hospital. Ben took his meds for years when in a supported residence; now, after a relapse, he is living with us and takes the meds because it is a house rule. So far, so good...but getting a ruling of "medication required" is very tough.
Still, becoming conservator has allowed us the right to knowledge of medical issues, and finances as well. It has worked well for us, especially during any time of relapse.
The book "I Am Not Sick, I Don't Need Help" and NAMI's Family-to-Family course helped us re-evaluate our communication with Ben - and that has helped with meds cooperation.
I outline these and other resources in "Ben Behind His Voices" - and this website has info as well.
I know how difficult this is. Reach out for good advice and help, especially re your local laws.
Hang in there,
Randye

Medication of mental illness, as principal biological treatment of the same, indicates many misunderstanding as well as a lot of misuses from patient and their close relatives.Your above remark illustrates this statement in authentic way. In order to overcome this therapeutic impediment, it should to face respective psychiatric patient and its family with mental illness, as stubborn health disorder. First of all, each psychiatrist has to explain in comprehensive manner the real nature of mental illness. At all events, every patient ought to admit the role of psychiatric patient, that is implied to take medicate for long time in appropriate dose. Otherwise, the process of treatment would be half-witted and unsatisfied. This clause must to know the relatives of concrete patient, because they are irreplaceable factor of adequate psychiatric treatment of their mentally ill member.Certainly, The role of psychiatrist is crucial in the complex therapeutic circle.

Thank you so much for this. This is my main struggle with my son right now and I'm trying to learn how to play a role in his treatment while he refuses to be compliant.

Oh, Elizabeth, I know all too well how you feel! If you want to know more about anosognosia, Dr. Xavier Amador's book I Am Not sick, I Don't Need Help explains it more fully. This is a major challenge, I know. When I gave up trying to convince my son I was "right", our relationship got a lot better. It can be a long road, but I hope it does help a little to see it from your son's perspective. I learned a lot about empathy from the blogs here on Healthy Place, from certain books, and from NAMI's Family-to-Family Course. Hang in there!
Randye