Parenting and Schizophrenia: A Degree in "MRG"

It's May: Mental Health Awareness Month - and I hope you had a great Mothers' Day on Sunday.

Last week, I had the opportunity to present at the APA (American Psychiatric Association) 165th Annual Conference, about the value of a "therapeutic alliance" between caregivers (often families), healthcare providers, and PAMIs (Person Affected by Mental Illness -a word I use instead of "patient"). My co-presenter was Peter J.Weiden, MD, who advocates for the same respect, partnership and open communication.

My "credentials", next to his "MD"? Randye Kaye, MRG (Mom who Refused to Give up). Yes, I have other letters that could go after my name - but those are the ones that really matter as I speak to audiences about our family journey.

Why an MRG? Well, aren't we all? Truly, when we choose to parent, it's "for better or for worse" with no divorce proceedings

available to re-evaluate that commitment in the future (though during adolescence, many of us occasionally wish that were an option!)

Yet - I say this with all my guilty heart - when Ben's schizophrenia began to steal his soul (at least that's how it felt to us at times), I might have eventually given up - despite my love for, and commitment to, my child.

From what many mental health providers tell me, many families do give up. I hear, so often, "Ben is lucky to have you." And I wonder then, but how could a parent give up on his or her child? How could we abandon a sibling? A parent? A spouse?

And yet, I know the answer. Mental illness makes it feel as though your relative isn't even the same person you promised to love forever. This makes hanging in there so difficult. No one likes to be where they are not wanted.

As I've written in other posts, Parenting is always that delicate balance between stepping in and letting go, between sacrifice and self-care. It isn't easy in the most "normal" of circumstances. But when your child appears to hate you (during paranoia), when his actions are confusing and embarrassing (during psychosis), when no matter what you do nothing seems to make any difference - it's especially difficult to decide what to do. Give up and let him "hit bottom"? Try another therapist? Spend more money on treatments that don't stick?

You do want to give up, sometimes. You want to just put the whole challenge out of your mind and focus on the rest of your family. You want to say, "You made your bed. Now lie in it." Toughlove will help, right?

At, least, I sometimes wanted to give up. And, yes, Ben wandered homeless is in Idaho for five months when he was 18 years old. He earned it, I'd thought, and he will come to his senses.

But by that time, I now know, Ben was a slave to the growing symptoms of his mental illness. He could no more have "come to his senses" than my cat could bring me my slippers on command.

What made the difference for me? What turned me back into an MRG?

Education. I found NAMI. I took Family-to-Family. I read 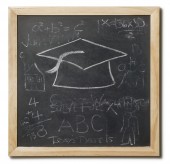 memoirs and books. I found websites like Healthy Place where I could search for information. Education empowered me, and taught the lesson I most needed at that time: to stop hating my son for something that was not his fault. Nor mine. Education helped me get past blame, preconceived "shoulds", and well-meaning advice from others who had no idea what our situation really was.

Education - and support - brought me back to my son so we could all help him in a new way.

The road has not been entirely predictable - anyone with mental illness in their family can tell you that. But it has been a better road, one with enough success to keep us going. Ben just earned six more college credits (on the Dean's List!) and is well on his way to his first (Associate Degree) graduation ceremony since middle school. I don't care how long it takes. I am - as are many reading this - an M.R.G.

APA Reference
Kaye, R. (2012, May 15). Parenting and Schizophrenia: A Degree in "MRG", HealthyPlace. Retrieved on 2023, February 3 from https://www.healthyplace.com/blogs/mentalillnessinthefamily/2012/05/parenting-and-schizophrenia-a-degree-in-mrg

Your comments give me hope, however because I live outside of the U.S. it is much more difficult for a mother like me, but thanks for all the information. I only hope that mental care in my small country can be approached in a different way.

Hi Maxene - Happy to provide hope any way I can - but you are right, each country has its own structure as far as mental health aid. Best to learn the ropes from others who share your situation in order to navigate the system - but hope can come from anywhere in the world! hang in there -
Randye

My son was 19 when he had his first break. It has been a very long hard road and has deeply affected all of our family. Eric is now 40 and has had a few good years. This is such a devastating disease. Itches stolen hi life and future. We are getting older and itbis really a worry to leave this up to his sisters after we are gone.. He lives in an apartment with HU D housing and we need to give his medicatiobn... Otherwise he stops taking them and we end up with another breakdown that can last up to a year. Does anyone Have any suggestion for group housing in California or a place that we would safely place him when we near the end of our lives? What are the options?
Jackie

Jackie - it is such a challenge, I know...
I don't know any California resources, does anyone else? there are some great articles to start you out here on Healthy Place.
Has NAMI been able to provide any links to resources?
Group housing has been a great step for my Ben on his way to independence. Some may need meds supervision forever...but it beats the relapse. Hang in there -
Randye

OMG,By reading your story, I feel like I am reading my own personal journey through mental illness with my son. I am too a MRG (Mom who Refused to Give up)NAMI and Family-to-family change my life. Right now I am an active participant in NAMI'S "Parents and teachers as allies" program. Thank you for a great article, and yes, you are right, Education and support is the key, it bring me back to my son too. Since my son got diagnostic with a mental illness I read every book I can, every article I find in pages like this, to understand, support, and to confirm him that he is not walking alone.

thanks, Martha! I'm so glad you find an ally in our story. Have you read my book ("Ben Behind His Voices"), as well as the blogposts? If you are interested, the book has many more details, and lots of resources peppered into the memoir. Hope you'll check it out, and or recommend it to anyone who might need to feel they are not alone!
my best to you,
Randye
one MRG to another!