Sandy Hook Plus One Year: Any Mental Health Lessons?

In our neighboring Newtown, Connecticut, too many families are steeling themselves for the anniversary of an unspeakable tragedy: the shooting at Sandy Hook Elementary School on December 14, 2012.

I've recently been interviewed for an article (coming out soon) about whether I think the Mental Health system in Connecticut has changed in the year since the incident. My answer? Not yet, not that I can see. If anything, we're in danger of sweeping the issues under the rug once again.

But the questions remain: Could it have been prevented? Should someone have seen the "signs"? And - more usefully, perhaps - what can be done to help stop future tragedy?

The day of the shooting, I had just come from a legislative breakfast where I had spoken against cutting the budgets for programs that provide preventive care and life-rebuilding skills for people living with mental illness. Cuts to such programs may look good in a budget for about a day or so - but the ultimate costs, emotionally and financially, are astronomical. (read: Families Dealing with Mental Illness Left to Cope Alone)

I cannot speak for the late Nancy Lanza, mother of shooter Adam Lanza. Still, to paraphrase Carrie Bradshaw from Sex and the City: "I can't help but wonder...."

....if Nancy Lanza had received professional help and advice, would she have made better choices as Adam's caregiver? 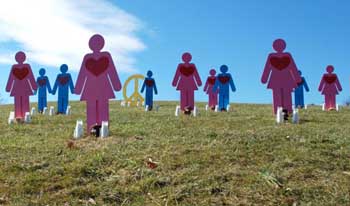 Parents of the victims have formed a group called Parent Together. Its campaign is designed to focus on mental wellness, community connectedness and gun safety - and to compile a list of successful programs that parents can implement to make their own communities safer and healthier. They want not to reinvent the mental health wheel, but to give national exposure to what already works - borrow from the best.

Among the important elements: support programs that ensure earlier identification of mental health issues in children, and access to counseling services.

Adam Lanza was not diagnosed with schizophrenia, the illness my son Ben lives with every day. But Lanza's issues are clear in a 44-page summary released last month by Danbury Connecticut State's Attorney Stephen Sedensky III. He reports, in part:

In November 2012, the mother... was concerned about him and said that he hadn’t gone anywhere in three months and would only communicate with her by e-mail, though they were living in the same house. The mother never expressed fear of the shooter, for her own safety or that of anyone else.

The shooter disliked birthdays, Christmas and holidays. He would not allow his mother to put up a Christmas tree. The mother explained it by saying that shooter had no emotions or feelings.

To me, Nancy Lanza sounds like a prisoner. A prisoner of her love for her child, the challenges of his condition, and of a system that failed to help her know what to do after her son "aged out" of school-age programs. (see "Parenting" on HealthyPlace)

I remember feeling similarly trapped - what do I do now? But the difference may be that I rejected the stigma and demanded help.

ashamed to ask for it -for Adam or for herself. So she took things in her own hands, perhaps, and tried to get her son to smile once in a while.

Unfortunately, those smiles often happened on the shooting range. Nancy needed follow-up, desperately, and Adam needed management she could not possibly have known how to provide.

Do we have follow-up for families in Connecticut if a loved one has a mental health "incident"? The answer is yes - IF responding officers are trained as Crisis Intervention Team members. Not much money in department budgets for that.

Is there more early intervention for youth who may develop serious mental health issues? That would be unlikely, as many school counselors are being "budgeted out", and many are not fully educated in the early signs of serious mental illness.

Are there options for respite caregiving for overworked families? Not many that I can see. After a decade of "supplementing" Ben's case management with my own 24/7 vigilance, and currently only getting help if I reach out and demand it - I doubt it.

So, for the grieving families of the Sandy Hook victims - bravo for your Parent Together Promise. Thank you for helping your children's lives to inspire change for the future. My heart, condolences, and admiration go out to you. I hope the politicians will listen and act to provide services now that will lead to a better future for all the families that live with mental health issues, and those they touch.

Together, with an eye toward the future, we can learn to invest in what works.

How Do I Help My Family Member with Mental Illness?
2013 and our "Silver Linings Schizophrenia Playbook"
m-spirit
December, 21 2013 at 1:14 pm

Making changes:
The unchanged way in which we deal with mental health has continued to create a larger black hole where the mentally ill, families, friends and anyone's child (who may be attending school) can be assaulted or shot to death for no good reason.
These are the profoundly painful repercussions due to social neglect of a very vulnerable sick population of citizens that this nation currently treats like pariahs. We are so fearful of our own unpleasant feelings and thoughts that we lack compassion for ourselves. We must become more self-aware, so we can face another's darkest fear that they have lost control of their mind and life.
Social services for mental health is the way to cushion the blow of illness; no longer ignoring the feelings, fears, people and issues that come with it.
Participate in real solutions.
Artist Studio Cafe Foundation Mental Health Grant (Foundation Donation Website http://www.razoo.com/br/causes/Artist-For-Mental-Health-By-Maasai-Rees-Tabari) awards is a grant up to $1500 a year for individuals who are uninsured and under insured.
The organization will advocate for mental health and approach mental illness from the patients point of view and provide individual medical grants that the state and government isn't providing. The grant will fund the costs for medication, therapy, and psychiatry. The cafe retail environment will be a community forum in artistic venue to approach the facts of mental illness.
Too many lives are already lost while waiting for funding, social and political change in action and attitudes towards those suffering from mental illness.
Services must begin today - please participate in a real answer to what's needed!!!

I'm sorry. I must correct my comment about Nancy Lanza. It is apparent from this post that I am mistaken. She simply did not know how to handle the situation. I agree that prevention should be shared by many. Going back to the Columbine tragedy, the shooters' parents did not recognize the signs of their sons' condition as well and were villified by the press. Parent Together sounds like a very positive campaign and I hope it gets the attention it deserves.
Thank you for this discussion.

I don't know. The mother theory appears to easily apply to Lanza's mother because, yes, he lived with her. But it also appears she was a bit of a gun nut and too dysfunctional to be a frontline of defense. I have no doubt that she loved him, but probably was unable to convert it into protection.
I am leery of pointing the finger at one person as a general rule - that somehow mothers are to blame for all the ills their children do.
Besides, there may be others around who may know the individual who can make a phone call. If you suspected something was up, wouldn't you? Well, apparently, this is not the way it seems to work. It seems when tragic situations like this happen, there is usually a chain along the path where multiple parties could have done something. Unfortunately, this is only recognized in hindsight. Take the Columbine tradegy - there is an interesting article in USAToday that dispels some of the myths manufactured by the media (i.e. they were loners bullied into retaliation). It also mentions that not only did some of the other students and friends know about the plan, they even egged them on. Any one of these kids could have talked to a teacher or called the police themselves, but failed to do so for whatever reason.
So, therein lies the complexity. The failure to act is shared by many. It is simply easier to blame the mother.

Judy, I agree with you. The problem is complex, yet for me it comes down to what a mother will do to protect her child. If her child's life is endangered, she will do ANYTHING to protect it. That's the fire I'd like to see lit in the face of the shame, stigma and the not-helpful suggestions that come from others (i.e., the story you shared about the woman who was told to quell her symptoms by praying). I know it's painful. I know it might be the hardest thing a mother will ever have to do. But dear God, if she won't do it, who will?

We can look at all the things that are wrong, and by searching we can attribute the blame and responsibility to a specific person, but as Randy points out, there is much more to family intervention - the need for information and resources that families can use to help their loved ones must be available, as well as society's acceptance that mental illness is a real medical issue.
For the most part, the decision not to intervene is due to many things - shame, fear, religion, etc. I am reminded of a story about a woman who was suffering from hallucinations and her husband, pastor and all her friends told her that she simply needed to pray to make the demons go away. This ended tragically.
So you see, the problem is much more complex if looked at in a broader sense.

Wow. What a great comment. When I speak about this issue, this is indeed part of the message: families need support, education and resources so that we can be a part of prevention and recovery. Too often families are left to their own devices to ”figure it out". Why? Budget cuts, stigma, heads in the sand.
Thanks to much for writing.

There is no question that Lanza was mentally ill and that his mother chose to minimize or justify his bizarre behavior. Unfortunately, she paid for that with her life. I spent the last year writing the true story of another tragedy where a young man with no history of violence suddenly murdered six members of his family because voices told him to do so. There had been plenty of signs, but the family -- even though they had sought help -- did not act upon them in any meaningful way. They, too, paid for their inaction with their lives. http://amzn.to/1hnlnB5 In my research of similar stories, I am finding a disturbing trend -- that of mothers who wait too long or never do seek help, often with disastrous consequences. Are mothers the new frontline for action in this war on senseless violence? I think so, I hope so. If they can convert their love for their children into mental health intervention instead of sheltering them from it, we might avert some future tragedies. Parenting together is a great concept and I believe moms have to lead the way. -- Janice Holly Booth