Final Conversations As Expressions of Love

Article on saying goodbye to a dying loved one and the opportunities that come from talking with a dying person.

Have you said goodbye to a dying loved one yet? Chances are good that you will. With medical advancements in the diagnosis and treatment of cancer and other degenerative diseases, we can anticipate 'dying time' much more accurately than ever before. A terminal diagnosis is a gift of time and a wake-up call that time is running out. How will you use the time? Will you see the end of life as an opportunity to talk, love, and grow from the experience of talking with the dying person, or will you bring out the crying towel and simply wait for your loved one to die?

The last stage of a loved one's life is a final opportunity to say "I love you" and to say goodbye. It is a chance to carry on a relationship until the very end or beyond; a time for growth; a time to let go of any hurt that may have been caused by a difficult relationship. Our book, Final Conversations: Helping the Living and the Dying Talk to Each Other, is for all who have lost a loved one to a terminal illness; it is for everyone who will lose someone in the future. It is for the surviving partners and for anyone who wants to understand the practical power and importance of communication at the end of life, and to learn how to have a better and more fulfilling final conversation.


Final conversations, simplified in our book to "FC-talk," include all the moments of talking, touching, and spending time with the Dying. (We decided to capitalize the Living and the Dying when we mean the person or people rather than the process.) These communicative moments potentially begin when you find out that someone you love is dying, and continue until the moment the person dies. FC-talk is not necessarily the "last" conversation that the Dying had with someone, although in some instances it is.

Seventeen years ago, Ellen was losing the love of her life. Her husband, Michael, was dying of a brain tumor. He was in his early forties and he was leaving a young wife and two young children. Ellen revealed that her FC-talk focused on keeping their relationship genuine until the moment of his death and beyond if possible. She wanted to be sure that Michael knew he was loved and that she had completed her relationship with him up until the moment of his death. She repeatedly told him that I loved him, that I would always love him. I really didn't want to live my life without him, but I didn't get to make a choice about it. I would do my very best job to raise our children right. I was just glad that we got to spend the time that we did together. I thought it was a privilege to be able to have shared my life with him. I was grateful for the time that we had and to have had his children.

Ellen emphasized that the message of love had to be clear, leaving no doubts. I think if you're smart enough of a human being, you actually convey to the person that you love them while it has meaning and while it has emotion. This was a conversation [that really mattered]; I mean, we were going to be separated. We knew we were going to be separated. And I just needed to be able to complete with him and to let him know that I've always loved him and that I always would love him. It was a privilege for me to grow up and spend my life with him. I think conversations that you have with people who you know are on borrowed time . . . even though we're all on borrowed time, we don't live like we're on borrowed time . . . I mean, I guess what I'm trying to say is that we should all live as if we all know we're terminal. Because we all are terminal!

I completed my relationship with him. I didn't walk away thinking, Aauugh, I should have said, I didn't say, I could have said, I wanted to say. There wasn't anything that we didn't really say. And in the final analysis, the most important, the absolutely most important things were all said. Because the person who is left doesn't get stuck holding a bunch of untied knots. It's complete. You're not dragging anything along with it. We both completed the relationship.

We both were able to let each other know that we didn't want it to go that way. But since it was going to go that way anyway, we made the most of that final time. After speaking together, we gave Michael the chance to complete his relationship with his family and his friends. We also gave him the opportunity to tell us anybody that he didn't want to come there. And there were some people, just a few, that he said, "I don't want to deal with them. I don't want to see them." So, it was a new level that a lot of people experienced in relationship to him and his death. Some were shocked that they were able to complete their relationship with Michael [through their FC-talk].

Because Ellen was in love with Michael to the end, she remained open to love and was lucky to find love for a second time. Ellen has now been happily married to Wally for many years.

Ellen isn't the only one who married again following the death of a beloved spouse. Cathy, Sondra, and Victoria all talked about the importance of FC-talk as a critical tool to assist the Living in moving on past the death. All of these young wives talked about the importance of the Dying giving the Living permission, and sometimes motivation, to continue living life. In these cases, the Dying gave the living permission—even encouragement—to marry again someday. Cathy's husband, Don, was thirty-two years older than she, so he knew that she would outlive him. Don began the conversation with Cathy about marrying again long before their FC-talks, and again when he was dying. Because he knew he was that much older than I, he said that I needed to make sure that I move on. Cathy often dismissed his suggestion while he was alive, but would remember it later. She appreciated his ultimate concern for her and their daughter Christina's future happiness.

Part of the completion of the relationship for these four dying husbands was their unselfishness and release of any personal jealousy of the Living. They knew that life is meant to be lived fully, with love, just as each of these marriages had been lived. For these wives, there was not going to be any guilt or looking back with regret. Completing the relationship honored love itself by acknowledging the love that had been, and by embracing the potential for the love that would be. All four of these women married again.

Sondra's husband, Steve, died of acute leukemia. He had just had four heart attacks in a two-week period. Clearly, he didn't have much longer to live. Steve told Sondra: "I don't want you to fear death. I don't want you to mourn if I pass away." The last thing that he wanted was any fear of that. And he said, "Death is part of life." I'll never forget that. "Everybody is going to die." He told me many times that "the worst thing you could ever do is to mourn my death. Don't mourn me; rejoice because I'm in a better place." Then he said, " I want you to remarry." He made me realize that this is not something that you're going to ever become bitter over. I had always thought previously that if somebody marries somebody, that you show your real love to them [after they die] by never marrying again, and you show that devotion to that person for a long time, even past their death. And, he said, "No, you will love." And he told me that "your real love for someone is to want the best for them."


A similar message was given to Victoria byher young husband, Kerry,whowas dying of cancer. Kerry was Victoria's first love. They had married young, and she was devastated at the thought of his death. Victoria recalled: We had great passion. I had never been with anybody else beyond casual dating. And I remember sitting in the hospital and saying, "I'll never marry again, there's no way." And he said, "I sure hope you will. I hope being married to me was good enough that it'll make you want to marry again."

Victoria elaborated on the importance of this FC-talk as a love message. When he told me I'd be okay without him, that I could live without him, that I should marry again, he was providing for my family. He was attempting to make sure that we had the best we could, that I would take good care of the girls, that I would have a good life. He was just continuing to be the loving husband and father that he had been all along. He was continuing to take care of us. I have known a lot of women that weren't given that kind of permission, that gift, who really felt uncomfortable with that idea [of moving on to love again]. Her words imply that women who do not receive that gift of letting go can remain stuck in uncompleted relationships and the memory of love—sometimes for the rest of their lives.

So, what did the Living teach us about love? Many things, as we describe in our book, but three points are worth mentioning here:

About the authors: Keeley and Yingling are communication experts who personally have had final conversations with loved ones, and who interviewed over 80 volunteers who wanted to share their experiences with others. Portions of this article were excerpted from the authors' book Final Conversations: Helping the Living and the Dying Talk to Each Other (VanderWyk & Burnham, 2007).

next: Articles: The Journey Through Cancer and The Seven Levels of Healing® 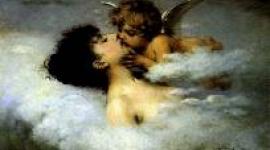 What Do Children Need?
Appreciating the Gift
Telling Stories
Honoring Both Traditions and New Beginnings

Where Have All the Frogs Gone?

How to Select a Complementary and Alternative Medicine Provider