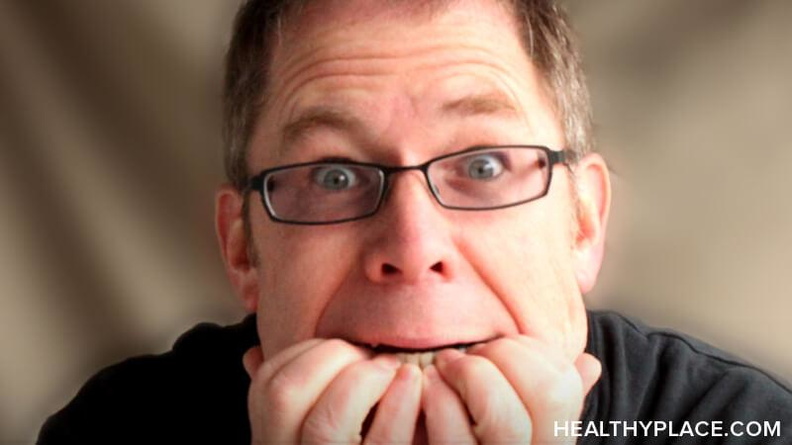 Recently my therapist and psychiatrist became concerned about some self-harm urges I've had. Short version: I could either take clonazepam or go to the Crisis Respite Unit. The problem was I didn't want to do either! I was afraid--afraid that I'd get a reputation for benzodiazepine dependency if I took the pill, and afraid I'd get sent back to the state hospital system if I went to Crisis Respite. My fear of the highly unlikely worst-case scenario was self-destructive; it was causing me to reject potentially helpful courses of action.

Self-Destructing with Fear by Catastrophizing

One of the symptoms of BPD is catastrophizing, that is, assuming the worst-case scenario is inevitable. I have a headache; it's a brain tumor. A police officer is behind me in line at a coffee shop; he's going to have me involuntarily hospitalized. A very real fear of a very unlikely situation causes us to panic, which interferes with our judgment. This fear then causes us to either try to prevent the outcome--in my case, by being hesitant to accept treatment--or becomes a self-fulfilling prophecy--in my case, being hesitant to accept treatment convinced the therapist that I needed emergency treatment.

How to Counter Self-Destructive Fear and Catastrophizing

Use Logic and Facts

The best way to fight back against catastrophizing is by using logic and/or facts. For example, only one person who accused me of popping benzos to get high: a crisis counselor who was later disciplined for unprofessional conduct during my evaluation. She had no knowledge of my psychiatric history or why the psychiatrist had prescribed them. Why should her opinion matter? The fact is that my psychiatrist prescribed the medicine for a legitimate medical reason, and I don't abuse them. This is what I need to remember--not some paranoid fear sparked by an unprofessional crisis counselor's opinion.

Ask "What have I got to lose?"

I've never had an adverse reaction to the medication before, so I could rule out a bad reaction. I knew that sometimes it made me want to sleep, which might be helpful--I can't act in self-destructive ways while sleeping. There was also the chance it could calm whatever was bothering me. I explained my fears to the therapist, she assured me that neither worst-case scenario was likely, and I took the medicine. Within an hour I was feeling better.

Fear is a natural, basic human emotion. As such, it should always be validated. There's a reason you're afraid, and it makes sense to you. For example, my fear of getting sent back to the state hospital system is because I was poorly treated at Richmond State Hospital. To me, getting sent back there is a valid fear.

But a valid fear is not always a rational one. And validating fear does not empower it to run your life. For example, the unit I was mistreated on at Richmond State Hospital is closed. That makes the fear irrational. And knowing that fear is irrational takes away some of its sting. It is a valid fear, but it does not have to run my life.

Armed with facts, information about a calculated risk and knowledge that the worst-case scenario is survivable, I can defeat my fear. I can acknowledge the fear, face it, and decide whether or not to let it affect my treatment decisions. After doing that, I can make a treatment decision without succumbing to my irrational, self-destructive fear.