Mental Illness and Domestic Violence: The Kiss of the Fist

The recent murder-suicide involving Kansas City Chiefs linebacker, Jovan Belcher, calls attention to the issue of domestic violence. While it is unclear if Belcher was an abuser, recent reports indicate that he and girlfriend, Kasandra Perkins, were in counseling for relationship issues. So it makes domestic violence a reasonable topic for discussion. I've noticed that mental illness is often a factor in domestic violence.

When the Abuser Is Mentally Ill 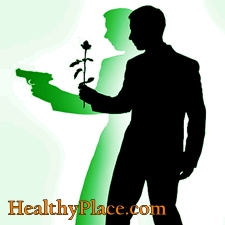 I foolishly became involved with a man with bipolar disorder and borderline personality disorder. He was--and is--the most romantic man I know, and that's part of what drew me to him. Things went well at first, and we supported each other in treatment.

Then he went off his medication, claiming "Medication don't do nothing Jesus can't."

He became verbally, physically, and sexually abusive. He refused to eat anything I cooked because he thought I was trying to kill him. He often threatened to have me involuntarily committed, something he knew I feared, and on a couple of occasions claimed to have killed people. Finally, he told me how to commit the perfect murder in my apartment. Taking this as a threat, I went to a battered women's shelter and filed for a restraining order.

People who abuse (domestic abusers) often have psychiatric issues such as narcissism. They believe they are entitled to their victim, be it physically, emotionally, or sexually. They overreact to any perceived threat to their possession of their victim. And that's abuse in a nutshell.

Help exists for the abuser, but the victim must first get to safety. For advice on how to do that, contact your local domestic violence center.

The Affect on the Domestic Abuse Victim

According to the Domestic Violence and Mental Health Policy Initiative, mental illness can increase a woman's risk of abuse.

"Domestic violence can cause an adverse ripple effect on the emotional and psychological state of a domestic violence survivor," according to the Florida Coalition Against Domestic Violence. "Panic attacks, post traumatic stress disorder, substance abuse, depression and anxiety are often ignited by domestic violence and/or other severe forms of abuse. ... Research indicates: 54% to 84% of battered women suffer from PTSD, 63% to 77% of battered women experience depression, and 38% to 75% experience anxiety."

In other words, the Punitive Parent mode goes into overdrive in this situation. Schema therapy teaches that the Punitive Parent " feels that oneself or others deserves punishment or blame and often acts on these feelings by being blaming, punishing, or abusive towards self (e.g., self-mutilation) or others." Survivors must learn to recognize and banish the Punitive Parent, which is a liar at heart. Raising one's self esteem is a good way to fight back--it's one thing to say no one deserves abuse, but another to believe and live it.

What I Am (And Am Not) Saying

Because one more victim is one too many.

APA Reference
Oberg, B. (2012, December 4). Mental Illness and Domestic Violence: The Kiss of the Fist, HealthyPlace. Retrieved on 2022, June 25 from https://www.healthyplace.com/blogs/borderline/2012/12/the-kiss-of-the-fist-mental-illness-and-domestic-violence

How to Fight the Holiday Blues
Self-Injury 101: Why Some People with BPD Self-Injure
ivy alicia sandlin
December, 11 2012 at 4:52 pm

i feel its so hard for family members to own up and confront their abuser i know this from personal experiences dealing with the molestatiom of my biological father to the horrible abuses of all kinds my aunts and auncles and even my own mother sand grandmother were subjected to it s sirtually impossible for this man to own up to his own actions and also will do everything in his power to manipulate bribe and do anything to discredit the truths behind my mothers and my own allegations i would gladly try and start over if he could admit his own wrong doings i mean i have my share of wrong doings lashing out i guess youd call it but because of my bpd disorder with the lies the drugs the law breaking i am dicredited by far in compariason a million miles i filed for disability and try to overcome my depression but it seems like so many bpds ive heard of i just cant escape my own worst enemy me. i have lost evrything once again and donot have another try left inside me it seems without opiates a very mild use of but none the less my brain after yrs of opiate use and then lack of i have never felt normal i know this has nothing to do with domestic violence but in some ways addiction caused alot of abuses in my life and in the lives of my family i notice out of five quotw children 3 are ocd and my mother and i who r like sisters who fight terribly are horrible bpd disorders my [rayer is that we can all try in our own sections of our own worlds that we can stop the cycles of abuse by working together and helpimg others in these situations

The correlation between mental illness and domestic violence is complex and most intrigued issue than it seem in first look. Anyhow, this disturbed psycho-social statement seeks more attention from both professional and social subjects in order to control this deep human wound. As we know, the family milieu should be amicable, if we attempt to recover and manage the mental illness of any member with psychic disorder. In this direction, it ought to confirm the mention the fact that the principal prerequisite for this psycho-social performance is constructive and understanding interpersonal relation in familiar network mycrosystem. It is easier to say than to do this model of friendship coexistence, because family with mentally ill person as close psycho-social network has got many emotional positive and negative interpersonal connections. My suggestion in this fragile situations is consist in mutual respectability of members in family life.