A Lesson Learned From a Random Stranger

I once read a book by a homeless man, and he talked about the first thing his guru said to him: "Everything that happens to you is for your own good."

As a rape survivor, I argue with this, but it stood out to me. My version would be "Everything that happens to you is to teach you something." I recently learned a major fact about my BPD diagnosis from a woman at the bus stop.

What Happened at the IndyGo Stop 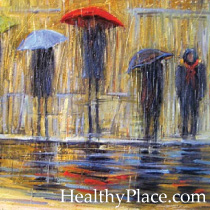 Indianapolis was once named the sixth-most mentally unhealthy city in the nation and, for some reason, our residents with mental illness are attracted to the IndyGo bus system. When a woman suddenly screamed "Plead the blood of Jesus! Woo!", I gave her a brief glance, convinced that she had a mental illness, then returned to waiting for the bus. Suddenly, someone screamed, and I turned just in time to see her fall to the ground and begin convulsing. A small crowd gathered around, staring. Someone cried out for someone to do something and I stepped forward. I did what first aid I knew since she was bleeding, told a bystander to call 911 to report a bleeding woman having a seizure, and waited. The EMTs came, said they got called on her all the time, then escorted her to the ambulance. I caught my bus and went to my destination somewhat shaken up.

I later talked to a woman who has been a nurse for 30 years and she said my reaction was normal. She said that even nurses get shaken up by seizures. She said I did the right thing first aid-wise and that I was a hero for taking action. I then began to think about the situation and what I had learned from it.

There are few situations in the world in which one feels more helpless than when waiting for the ambulance to arrive. I discovered that I don't like feeling helpless. Why? Because it reminds me of past trauma. It reminds me of times I couldn't protect myself or take action to help myself. These situations were very painful and led to my development of post-traumatic stress disorder (PTSD) and borderline personality disorder (BPD). So it makes sense that being in a situation where I feel helpless triggers my urge to use negative coping skills such as drinking alcohol or self-injuring.

I now have a new insight into my condition. I can be on guard against future situations in which I might feel helpless, such as a current battle with the government over my food stamps. I can understand why I want to drink or cut, and use this understanding to talk myself out of it. I can recognize why my symptoms are worse than normal and articulate the problem to myself and to my treatment team. To me, this is a big lesson.

Everything that happens to you can teach you something.

APA Reference
Oberg, B. (2013, March 27). A Lesson Learned From a Random Stranger, HealthyPlace. Retrieved on 2022, September 25 from https://www.healthyplace.com/blogs/borderline/2013/03/a-lesson-learned-from-a-random-stranger

Seeking Work with BPD: How Honest Should I Be?
Music Therapy and Borderline Personality Disorder
Kathleen Brannon
April, 6 2013 at 9:23 am

Hi Becky,
Thank you for this. The insights that come to me from ordinary life, unexpectedly, are often the ones that are the deepest and most useful. Being helpless in a situation, or just feeling helpless, also sets off my extreme anxiety and self-injury. Helplessness, along with sleep deprivation, was a large part of why my last hospitalization was so traumatic for me. The trauma doesn't ever just go away either, so I need to avoid situations of extreme helplessness and/or lack of sleep. (BTW, my son has seizures and my husband panics every time. They are so dramatic it's very scary.)