What Miss Piggy Can Teach Us About Anger

Did you know that Miss Piggy can teach us a lot about anger? For the lesson, watch this video. Note Miss Piggy's hysterical but understandable overreactions, and ask what you can learn from them.

It would be nice if everyone could not only tell that we're angry, but why we're angry. Notice how Miss Piggy never states what the problem is, although she clearly expresses her anger. People with borderline personality disorder (BPD) are often the same way; one of the criteria for a diagnosis of BPD is "intense, inappropriate anger". We growl, we clear our throats, we shoot hostile looks, but we rarely state what the problem is. It's as if we expect people to automatically know what they are doing to make us angry. And since people aren't mind readers who instinctively know why we are angry, this leads to further frustration for us, which leads to us getting more and more angry until we lose control, often to the bafflement of those around us. 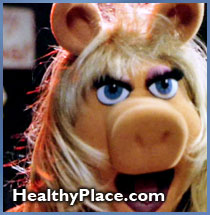 Even in flagrant cases of wrongdoing, where you think it should be obvious to the other person what is wrong, it helps to state the problem. I remember a guy in a bar groped me one time, and I responded with a hostile look. He did not get it. In hindsight, I should have said "Don't touch me" rather than expect him to interpret my reaction. Even a drunk can get the message once it's spoken.

Does stating the problem help? Most of the time the answer is yes. But what if it doesn't? That leads to our next lesson.

Watch Miss Piggy's reactions. She goes from mildly annoyed to full-blown rage in a matter of seconds. Yet even if you lose your temper that quickly, you still have time to ask "Is it worth it?"

We all run across situations that anger us, and stating the problem does not always help resolve the situation. This is when we need to ask ourselves "Is it worth it?" Is it worth losing one's temper over?

When I get angry, I ask myself "Is it worth a trip to the psych ward?", Is it worth a visit from the police?", and "Is it worth getting placed in restraints?" The answer has never been yes. Very rarely is an aggravating situation worth losing control over. This insight can help us control our tempers. Anger is understandable, but it can be dealt with constructively. Once we succumb to our anger, though, we can no longer handle a situation constructively. That's when the negative consequences come.

Lesson Three: Ask "How Can I Respond?"

Miss Piggy handles her anger in classic Miss Piggy fashion: she loses it, screams, and lets out a karate chop on the source of her stress. While this is certainly understandable, it's not really an option in the real world (unless you answer "Is this worth a battery charge?" with "yes"). So stop and ask "How can I respond?"

Oftentimes the problem can be solved simply by stating why you are angry. When that works, you don't need to worry about your response because the situation will resolve itself. But what if it isn't solved by discussion? That's when it's time to ask yourself if your response is worth it. But to do this, you need to ask yourself "How can I respond?"

You can lose your temper. You can use positive coping skills such as deep breathing and meditating. You can even acknowledge your anger and choose to ignore the situation. Your response is ultimately up to you. Choose wisely.

APA Reference
Oberg, B. (2013, April 2). What Miss Piggy Can Teach Us About Anger, HealthyPlace. Retrieved on 2021, June 24 from https://www.healthyplace.com/blogs/borderline/2013/04/what-miss-piggy-can-teach-about-anger

Music Therapy and Borderline Personality Disorder
Is It a Spiritual Experience--Or a Psychotic Episode?
Jimmy Durham
August, 1 2014 at 5:29 pm