There But For The Grace of God, Go I

On Monday, Aaron Alexis went into the Washington Navy Yard and started shooting. Within hours his mental state was questioned--we're now learning Aaron Alexis had a psychiatric history and "slipped through the system". While there is no definite link between mental illness and a risk of violence, there is a pattern emerging between mass shooters and inadequate mental health treatment. (read: Should People with a Mental Illness have Firearm Rights?) There but for the grace of God, go I. 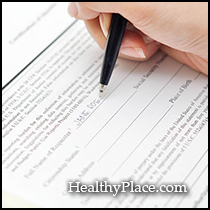 I was in college when Columbine happened. When it became apparent that mental illness may have played a role in the tragedy, the university reacted quickly--and illegally. The university went into the mental health files of all the students who had sought counseling through the university's counseling center, and formed a profile of who was likely to be a school shooter. The students who fit the profile were treated to no-warrant dorm room searches.

I remember this because a university employee warned me that I fit the profile and was about to have my room searched for weapons. The university found my knife collection, reported it to the counseling center, and expelled me from the dorm despite the fact that two psychologists and the dorm director said I was no threat to anyone.

I remember when I was hospitalized during my sophomore year, I was admitted through the emergency room. When I was filling out the paperwork, the doctor stopped me from disclosing the incident to the university, saying "Trust me, you don't want them to know." Another patient in the psych ward said that he was concerned his wife, a university employee, would lose her job if they found out he had a mental illness.

Years after I left, the university got into some legal trouble for discriminating against its students with mental illness. In an effort to be a safe place, the university had provided a hostile environment that ironically paved the way for a murder by a student who was hearing voices. He was not in treatment. Students slipped through the system due to the stigma of seeking mental health treatment.

Slipping through the system

When I returned to Indianapolis after I graduated, I sought mental health treatment. Although it quickly became apparent I was unstable and needed to be in the hospital, there was no legal way to get me there. Although I was paranoid, short-tempered, alcoholic and delusional, I was neither suicidal or homicidal--the only reason to be admitted to the hospital.

I eventually ended up at a community mental health center in Hamilton County. At first, I was receiving adequate treatment because I was uninsured and they worked on a sliding scale. When I went on Medicare, however, they required me to pay a set amount. You guessed it--it was more than I could afford. So although my treatment provider said I needed more treatment than what I was getting, there was no way for me to get it. I became worse and more than once wandered the streets of Indianapolis psychotic and suicidal--with their full knowledge. Thankfully, I never hurt anyone but myself.

I slipped through the system because I didn't have access to treatment.

Why I have an FBI file

Eventually I got to the point where I was dangerous and gravely disabled. I told a psychiatrist in the emergency room that I was going to commit suicide by police by going into the federal building with a shotgun I would purchase on layaway. I said I'd sign myself in to the hospital, but she said "It doesn't matter; I'm EDing you." She got an order for emergency detention (72 hour commitment), notified the FBI (who never talked to me) and tried to get me charged with intimidation. The ordeal led to me being sent to the state hospital for 13 months.

So I know all about the risk of violence due to slipping through the system because there but for the grace of God, go I.

The system only worked because I became a risk that was too great to ignore--ironically becoming that way by slipping through the system.

So tragic that people slip through and get help only when a threat. Too bad that this happens, but, I fear that it will continue. I pray that you have found your way through the bad times.

This is a brave and well written article . I greatly admire you for writing it!