When the Court Makes It Worse For People With Mental Illness 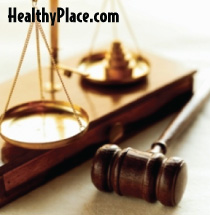 According to Olmstead v. L.C., holding some people with severe mental illness in institutions is an illegal form of segregation. In the court's words, people with severe mental illness have the right to live in the community if "the State's treatment professionals have determined that community placement is appropriate, the transfer from institutional care to a less restrictive setting is not opposed by the affected individual, and the placement can be reasonably accommodated, taking into account the resources available to the State and the needs of others with mental disabilities."

Unfortunately, the court's decision allowed people to fall through the proverbial cracks of the system, resulting in homelessness, imprisonment and re-hospitalization. It also allowed patients who were functioning at less than their best to go without help that might allow them to function better. This is the law that allows self-injurers not to be hospitalized because their cuts aren't deep enough.

Some states have taken action to fix this. For example, when I was in the state hospital at Larue D. Carter Memorial Hospital in Indianapolis, I did not have a place to live when I became eligible for discharge. Under Indiana law, I could not be discharged until I had a place to live. While this put an extra few months on my stay, I was glad I wasn't being released to the streets. Unfortunately, this rule is only good for state hospitals--the homeless are frequently discharged from short-term psychiatric facilities with no plan of action.

We have to choose. Do we want to potentially violate Olmstead by holding a patient longer than necessary, or do we want to do what's in the patient's best interests?

According to MentalIllnessPolicy.org, this case ruled that even though work is therapeutic, patient-workers in the hospital were employees covered by minimum wage and overtime laws. On the surface, a good decision. However, this case resulted in most hospitals eliminating patient jobs. Massive deinstitutionalization was also a result since the hospitals became more expensive to operate.

"The Souder case has proved one of the most destructive to patient welfare of all the cases brought by the mental health bar," states MentalIllnessPolicy.org. "Thanks to Souder, enforced idleness has become one of the worst features of mental hospitals and a standard complaint of commissions investigating state hospitals has been (in the words of a New York commission) 'the total lack of occupation' on the wards. Yet there are few principles more broadly accepted than the therapeutic value of labor which, from the pristine days of moral treatment, was considered the capstone of therapy. Emil Kraepelin, the father of biological psychiatry, summed up the general view: 'Every experienced alienist soon recognizes the worth of meaningful activity, especially farming and gardening, in the treatment of mental patients.'"

Even though Souder was overturned in 1976, patient jobs did not return, possibly due to a fear of additional lawsuits. So the question of patient employment remains unresolved.

Dr. E. Fuller Torrey stated “It would probably be difficult to find any American psychiatrist working with the mentally ill who has not, at a minimum, exaggerated the dangerousness of a mentally ill person’s behavior to obtain a judicial order for commitment. … Thus, ignoring the law, exaggerating symptoms, and outright lying by families to get care for those who need it are important reasons the mental illness system is not even worse than it is.”

When the court makes it worse, the system adapts to get people with severe mental illness the help they need by more Machiavellian means. For example, a therapist once lied about me pulling out a knife and cutting in order to get me an emergency evaluation and admission. This makes the system much more dysfunctional than it has to be.

We as a society have to decide between what is legal and what is right in mental health care.

APA Reference
Oberg, B. (2013, December 31). When the Court Makes It Worse For People With Mental Illness, HealthyPlace. Retrieved on 2022, June 28 from https://www.healthyplace.com/blogs/borderline/2013/12/when-the-court-makes-it-worse

Is Psychiatric Treatment a Human Right?
Ways to Keep Your Sanity In A Natural Disaster
Ronald Falco
January, 3 2014 at 4:13 pm

what i will never understand is why a licensed mental health professional (Raquel C. Spears)employed by Chautauqua Opportunities in Dunkirk New York was ever allowed to abuse her power her position in a unethical and criminal manor why was she allowed to enact a involuntary mental health commitment order which was based on lies she stated which she did only after a Sheriff who evulated me and determined no action was neededtold her this than and only then did she state the lies to justifi her actions why is nothing done to correct what she so unjustly done why has her unthical and criminal actions been allowed could some one explain this