There's a rumor going around that my payee was fired because he was pocketing the money from his clients' Social Security checks. The results have not been pretty. Trust between staff and clients is on the skids, and people are borderline paranoid of losing more money. When someone asked, "Why do they take advantage of mentally ill people like that?", my friend Michael replied, "Because they can." It made me think about what happens when people with mental illness have encounters with the criminal justice system.

The truth about mental illness and crime 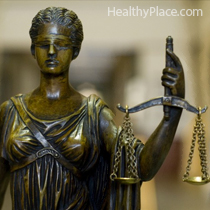 I seem to have a knack at stumbling across crimes in progress, ranging from grand theft auto to assault. My therapist and I discussed this, coming to the conclusion that it was due to me venturing out of my apartment and walking through a bad neighborhood to get to the bus stop. Since part of recovery is not staying at home all the time, we decided to accept this as a consequence of recovery.

The prosecutor doesn't trust us.

After the sexual assault, the prosecutor said there was not enough evidence to prove use of force. Reality was I couldn't fight back--I was paralyzed with terror and decided it was in my best interest not to fight back. I firmly believe that if I was not a psychiatric patient, the case would have been prosecuted. But it would have been easy for the defence to make me look unstable and like I'd consented and then changed my mind.

After the physical assault, which happened in a psychiatric hospital, the police refused to arrest my attacker because "she'd just be processed and sent back here." The prosecutor said it would be "too hard" to prosecute as my attacker was also a psychiatric patient. The second-in-command at the hospital said this happened often--that he'd even requested people be arrested and the police refused. He also said that all the defence would have to do was subpoena the psychiatrist. I firmly believe that if mental illness had not been involved, justice would have been done.

Picking up the pieces

When you are the victim of a crime, you have to come to terms with what happened. Talking with a therapist is vital--the prosecutor's office should be able to refer you.

I've come to terms with what happened to me by writing about it. This does not mean that I am completely free of the pain. It does mean that some days are better than others and that it does not dominate my life. That's as close to healing as possible at this point in time.

Take it one day at a time. Things do get better. Scars remain, but they are a sign of survival.

Taking Your Power Back From Bullies
How Buying Something Can Trigger Symptoms of BPD (Video)
Mary Lou S.
February, 17 2021 at 9:39 pm

I am a Lady, mentally ill with manic depression.
12 years ago, in a psychiatric facility, I was spotted by a narcissist and schizophrenic rich Lady. She made me believe we would be friends. I was so alone and economically poor, that I felt flattered.
For 12 years, I hanged around with her. She has psychologically destroyed me with her narcissistic abuse. When I tried to cut ties with her, she would stalk me and hovered me back. She was not respecting private property of my home, and I felt unsafe.
She finally abused me calling the emergency numbers to put me into psychiatric hospital for a month for no reason, after I had not been answering her stalking phone calls.
I turned to our small town police to prosecute her, and I found myself prosecuted for bothering such a rich and highly well known Lady in our town.
I had to write a letter by myself to a high authority of the Federal Government to longly explain the situation, and obtain a restriction order advocating human rights.
Now, the Major and Chief of the Police of my town hate me, for getting "dirty", the reputation of such a distinguished, rich and well known Lady, and started harassing me.
Not finding one single lawyer to defend me or take me seriously because of my mental illness, I had to write an official letter by myself to a Senator from the Federal government.
Now I am finally at peace and safe in my home, and have started therapy for recovering of PTSD, burn out, and long lasting exposure to narcissistic abuse.

Hi Mary Lou,
Thanks for reading and for taking the time to comment. I am not the original author but I am the new writer for the More than Borderline blog.
I'm sorry to hear that you were in such a traumatic relationship, but I'm glad that you are now safe and working towards your recovery. Good luck!

It a shame when people take advantage of mentally disabled women with kids? I have a sibling who's house was tore up by an organization/law enforcement agencies/media; the home was left to her & 3 children by her deceased U.S.Air Force veteran father. Sad but true; no such thing as justice. She receives hardly no help from the Air Force or government either, the Devil is very real..
God Bless What The Devil Don't Cook;
Mr.John Wesley Sillette

It's a shame that there is such a stigma concerning the mentally ill. I have been abused for being overly kind and loving, but gullible is the reason. Unfortunate for me I have a past history of substance abuse(talking 24 years clean). What's the clincher ? The man was bed bound! I am neurologically impaired. I rather not go into details but of course I was portrayed as the culprit. THERE OUTTA BE A LAW!!

I need help I am being taken advantage of by my dds. A procedure that should have taken 6 months has been going on for a year with no finish in site. The only reason this is happening is because I am mentally disabled. They have caused me to become a complete shut in. Just yesterday I called them totally distraught n was promised a call back which of course never came. This whole process has become a huge nightmare n I have nobody to turn to. I don't have a mental health advocate n don't know how to get one. Can someone help me please?

Im so sorry you had to go through this. You are a brave and strong women. There is bad in this world and you've continued to be the good.

[…] you know how to spot a sexual predator? It is a sad fact of life that some people prey sexually on others–and it’s not always the weak and helpless who are victims. Strong, capable people may […]

Awesome article, Becky. For several years, and I have been forced to move around because of this - some people have been following me wherever I go, and honking their car horn. This doesn't stop - when I'm at home, they do it too. Anyone I've talked to about it (family, friends, social workers) immediately give the same response, 'Are you sure you are not imagining it? Maybe it's part of your mental illness.' (the term 'gas-lighting' comes to mind)
In my opinion, it doesn't get more 'evil' than that - goodbye privacy, autonomy, any sense of safety and equal opportunity. Tell the police? Yeah, sure. There's a case dismissed before it even gets a fair read. What's the answer, then? It's the end of civilization. Period.

Ms. Oberg, you fail to realize that people who rape and take advantage of the elderly or any vulnerable group, these people are not well. Normal people do not rape or rob from the poor. So what we should say is that some mentally ill people are victims of other mentally ill people. This happens in jail where there are plenty of mentally ill and non mentally ill, and there are rapes, among females and among males. You need to realize that there are some mental conditions, like narcissism, that are not obvious to the casual observer. People think, in cluding you, that evil exists, and that these people behave criminally out of evil nature. I suggest that that is not the case. Normal people are not evil. If you see somebody behaving evilly it's because they are not well in the head. Jail is the worst thing that can happen to them.

Thanks you Becky,
Great post, very valuable. And sending you all the best in your recovery and healing.

My depression went from my being able to work a regular job and then escalated to where I had to make my own decision and resign. Yes, I still miss my job, but had to do what was best for me and my husband. I was cognitive enough to make that decision.