One of my friends from AA relapsed recently. Her struggle has caused me to learn many things. One is that alcoholism is a progressive, deadly disease that is "cunning, baffling and powerful", and that you must always be on guard because alcohol relapse is easy, no matter how many years sober you have. The second is that you have to have a reason to stay sober, and you have to work at it. The third is that alcoholism relapse can happen to anyone. 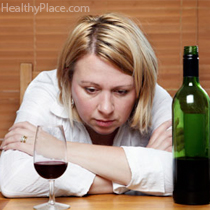 My journey into the bottle began at age 20, after I witnessed an assault and was powerless to stop it. Alcohol provided an escape for me. I could drink until I blacked out, sleep, then wake up and drink again. I had to still the voices blaming me for the assault. Alcohol was my solution. It masked the symptoms enough to where I could function.

That didn't last long. Soon I was drinking every day. The memories were powerful and traumatic; I had to escape them. I soon found that if I drank until I passed out, I didn't dream about the assault. A few months later, my therapist asked me if I'd considered going to AA. I replied that my drinking wasn't that bad, and she replied that she thought it was. I went to two meetings and quit. My drinking career was marked by bouts of sobriety followed by binging. (Signs and Symptoms of Alcoholic Relapse)

I finally drank myself into the dual diagnosis unit at Richmond State Hospital in Richmond, Indiana. The experience was so miserable that I stayed sober for three years out of fear of getting sent back there. But eventually I relapsed, and finally drank myself into alcoholism rehab about a year ago. I go to AA about three times weekly and have been sober for nearly 13 months.

Alcoholism is progressive and fatal, but it can be treated. We just have to choose to accept treatment. (Three Common Myths About Alcoholism)

Find A Reason To Stay Sober

My reason for staying sober is literally for my sanity. I know that if I take that first drink, I'll drink myself right back into the psych ward. If I drink, my voices will come back and my self-destructive nature will manifest. I have to stay sober in order to survive.

Another reason--four reasons, actually--are my three nephews and my niece. I want to be around them and be a part of their lives. I don't want them to have to worry about what I'll do in a drunken stupor. I don't want them to see me drunk. I don't want my brothers to explain to them that Aunt Becky is sick and sometimes does stupid things under the influence of alcohol. (Addiction and Mental Illness: The Struggle to Stay Sober and Sane) I also don't want my nephews and niece to become alcoholics who can justify their drinking by my excesses.

You have to find what works for you. The reason can be as basic as you don't like the taste of dry vomit in your mouth in the morning. Whatever works. Your reason for recovery is entirely your choice.

Alcoholism Relapse Can Happen To Anyone

At Richmond, the staff were fond of saying "A relapse is part of recovery." I don't agree, but I do agree that it looms large as part of recovery. Relapse is kneeling at the door, waiting to pounce. It can happen to anyone. Knowing this can keep a relapse at bay. (10 Most Common Dangers That Can Lead to a Alcohol or Drug Relapse)

I'm tempted with a great deal of frequency. I know that if I'm not aware that it's a lying temptation, my chances of relapse are greater. By realizing that I can relapse no matter how much time sober I have, I can be aware of potential recovery pitfalls.

For now I'm sober one day at a time by the grace of God and the fellowship of AA. I'm always learning new things from meetings. What have you learned from relapse?