God Wants Us to Be Happy, So Why Aren't We?

I'm taking an online course in Kabbalah, which is a form of Jewish mysticism. Last night I learned something that was a Copernican shift in my worldview--God wants us to be happy. God wants to give us endless fulfillment. Then the professor said that we were asking ourselves, "What went wrong?" God wants us to be happy--so why aren't we?

Why Reality Exists and How It Applies to Borderline 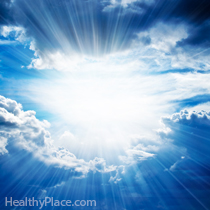 In the beginning, Light, or God, decided He wanted to share with us, the Vessel. As Light poured in to the Vessel, the Vessel took the form of Light. We wanted to share, but had no way to do so. Then we wanted to feel like we'd earned our fulfillment--we didn't want it as a gift. So we pushed the Light away, causing the Big Bang and sending us into the Reality of the Five Senses. This formed barriers to the Light.

"There is no coercion in spirituality," the professor explained. We have to want the Light to get it. This is hard enough for a person without borderline personality disorder (BPD), but when BPD factors into the equation, we go haywire. We feel as if the Light is hostile. We feel as if we don't deserve the Light no matter how hard we work.

But from the Light's point of view, nothing happened. The Light still wants us to be happy and is still willing to give us fulfillment. We simply have to remove the barriers to the light by accepting responsibility for our lives--something extremely complicated for a person with BPD to do. We need to learn that accepting responsibility, even for the negatives, especially for the negatives, does not make us bad people. Regardless of what we've done, the Light wants to fill us with bliss. The Light sees us as good.

The Bread of Shame

The Bread of Shame is what we receive when we receive anything we feel wasn't earned. People with BPD give and receive a lot of Bread of Shame. An example is the son who wants to inherit his father's company but would rather earn it than be given it because he's the son. Either way he gets his desire, but one way he's happy and the other way he's not. It depends on whether he feels he earned it.

In the beginning, there was only one Vessel--the collective Vessel. When the Vessel refused the Light, it shattered into billions of tiny pieces. Each piece has the capability to receive the Light, and as it receives the Light, it connects with other pieces. In other words, a right relationship with God leads to right relationships with others. Every religion I've studied teaches this, so there must be something to it.

So how do we fix the relationships with God and others? By being honest about who we are. By sharing what we have received. By accepting responsibility for our actions. For a person with BPD, this may mean consistently working hard in treatment. For example, as a sexual assault survivor, this means that I admit I am hurt, share my resulting compassion with others, and accepting responsibility for my anger and resentment toward my attacker.

God wants us to be happy. It's up to us to find that happiness.

BPD and Romantic Relationships: If You Really Loved Me
Borderline and Serenity in the Midst of Chaos
azalee
July, 20 2014 at 1:26 pm

hello becky,
i was interresting by your post,
this is the beginning of my life those questions.
if god wants me to be happy, why i am not,
why was i put in the situation of suffring ?
why? who is responsable for that.
that the bpd , that i am, was stuggling with.
did i ask to be born ? why they do not care the way i want....
because "i want" the love and the care that I wanted.
god doesnot want us to be, or not to be (happy)
it's us, it s me, who want to be happy...
that is the religion question false,
and Buddha says, that, what's make you suffer,
is WHAT I WANT, our desir, (is not wrong)
is the barrier, is that 's make a stop to the love,
which cannot reach the vessel (us,)
it is my own mistake, not to be happy with what was given to me, (or not given to me) which brought
me trouble...
to be simple, (because things in my own life are more complexe what i express)
it is ordinary given by our education what we try to talk about,
i think those questions are the same for those who are not diagnose bpd... but they managed in they own way...
because they could find a way...
for my experience is the influence which is on us,
who give the problem...
we do not think by ourself,
we are young at a age , wanted advice, and we listen, one, two, or three different person around me,)
it is this, who make us in a situation not to have the possibility to behawe the way we are at the moment.
they want (our parents) to be happy,
and if we do not make them happy,
then then stop loving us....etc...
i think the religion put an influence on me,
which was wrong for me....
and if there were no religion at home (wherever i was) i would have been more happy....
the confusion started in my mind young age, when first i saw the "priest" smiling, and in my familly nobody was smiling, or talking (because of me) and i didnot know it,
but then, i start to think, why this person, can
smile, and those doesn't ?
simple question,
i saw a problem in that .
my mental stated to be at work....
i saw the priest has love for me,show his concern,
and my family didnot....
comparer comparaison is the problem....
god loves us, no doubt,
we are not able to receive it all...
and it is for all the same,
only bpd, kept the problem and cannot concentrate on something else that those questions.
to make it simple.
a big bpd and o.d/d symptoms person

I agree with Cate. This is not my understanding of God or how we manage BPD within our relationship to God. There are a few good points, but overall, I don't have to "work" to get better. I have to be honest with myself to get better. In order for me, the physician, to heal myself, I have to be honest with myself about myself which allows me to stay in the recovery process. God equips me to be honest. God reveals to me, and through other people, were I need to examine myself and honestly assess what is going on that doesn't work in order to discover better solutions towards wholeness and wellness.
Maybe the issue for me are the references to God as Vessel...I have no idea what that means in relation to recovering from a mental illness.
But, I do thank you for sharing. The perspectives of many help all.

This isn't my understanding of God or BPD it is really seems to have nothing to do with BPD.