How Can Colleges Help Students with Mental Illness?

I was diagnosed with severe mental illness while I was a sophomore in college. I was suicidal, which prompted an emergency psychiatric evaluation. Unfortunately, it also prompted eviction from the dorm and suspension from school. I later got the director of the counseling center to admit--on the record--that the policy was more for the benefit of other students than the suicidal student. It was not the most compassionate of policies. So how can colleges and universities help students with mental illness?

Education in College about Mental Illness

My university offered very little education on the subject of mental illness. So during my junior year, when I was a staff writer for the campus paper, I took it upon myself to write articles about symptoms of mental illness and how to seek help. While this did not endear me to the administration--especially when I reported that we had a high rate of eating disorders--my articles encouraged people to seek help. As one of my sources said, "You may think you're in control with your eating disorder symptoms, but you've never been more out of control in your life. We're here to help." 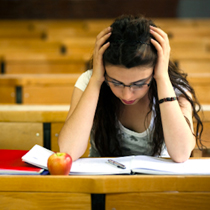 During my junior year, the college opened a new building which combined all the health services into one. This is a model for all universities to follow; many times there are physical problems along with the psychiatric problem. An example would be an eating disorder. The treatment team should include all aspects of life: physical, mental, and spiritual. The person will need to address the issue in counseling. They will also need medication monitoring. In addition, their physical health must be addressed as an untreated eating disorder can be fatal. Spiritual components also factor in as mental illness can warp one's understanding of the Divine. Treatment must address all aspects of life.

Treatment providers--be they counselors, physicians, or pastors--must all be on the same page. Each must understand mental illness and address the person's needs as a team. For example, a pastor should not encourage a person to fast and pray, but to seek help for mental health issues. A counselor should not ignore the spiritual component of the person's well-being, but help the person orient themselves toward a Higher Power in a healthy way.

While my college offered mental health screenings once a semester, it heavily stigmatized mental illness. When I was suspended for being suicidal, all of my professors were notified. I also had to appear before the dean of discipline to be reinstated, and I was told, "The consequences will be much harsher if this happens again." And it wasn't just me--a friend of mine was called before the dean after they checked her Internet history and found she was visiting sites about suicide.

A college should not ostracize students with mental illness; it should support them. Mental illness should not be grounds for suspension or expulsion unless the person is a threat to other people.

The dean who presided over my suspension told me, "You'd think we'd be sophisticated enough in our society to not stigmatize mental health." He's right. The stigma must stop, and universities are a good place to start.

APA Reference
Oberg, B. (2014, August 5). How Can Colleges Help Students with Mental Illness?, HealthyPlace. Retrieved on 2023, February 2 from https://www.healthyplace.com/blogs/borderline/2014/08/how-can-colleges-help-students-with-mental-illness

Location May Determine Access to Mental Illness Treatment
Reflections on Suicide in the Wake of Robin Williams' Death
cheryl b
August, 25 2014 at 8:48 am

I was fortunate in high school to have a teacher who realized I needed help with anxiety.
I was again fortunate in college when I realized I was depressed that there was a counseling center I was able to utilize. The sad part of the counseling situation was that my therapist had a breakdown and was replaced by a grad student I didn't communicate effectively with. So I stopped going. There was never any mention of medication and no follow up when I quit. More than ten years later, after I had gotten psychotic, I was diagnosed with major depression.
There needs to be awareness of mental health needs at all levels, and a breakdown of the walls created by stigma.
More power to this website and any other outlets available to bust stigma.

bring it on….and don't wait until college…start at high school

Hi Becky,
Thank you for this blog. I have a 17 year old son living with mental illness. We are stepping up our search for the right college for him. I am very much looking at mental health services at the schools. It is my expectation that all colleges have these services just as they have "medical clinics" available to students.
I am so sorry to hear of the horrible experience you had as a coed. I can only hope things improve as we speak up as you do in your blog and say, "this is unacceptable."
Bravo!

Unlike non-psychiatric medicine, psychiatric care system remains yet a critical issue for those with mental problems and theirs relations. As first impediments indicates stigma to mental pathology, which one embrace whole medical and non-medical opinion. Therefore, it ought to counteract this perversity everywhere and at any time, as soon as possible. This mission couldn't be realize with indolent and atavistic attitude of community toward people with mental disorders. On contrary, it should change instantly public view of point to mental health, as principal condition to global welfare. In somewhat way, mental illness involve all the community, because it reflect desperate impression to person around mentally ill ones. By me, as clinical psychiatrist, the motto to anti-stigma campaign should be: help mental ill people in order to help oneself!!! If, we continue to exclude mentally ill persons from daily life, we would to render more the recovery of the same. So, we would obscure global perspective. The process of education, on this side may contribute, very well. Let's support any reform on Colleges, that would offer professional help to student with mental difficulties !

I found myself in a similar situation, I had a breakdown in university in England. I engaged with the counseling service the university provided when I had a breakdown. Even with the support of the my counselor my academic department threw me off my course. The department kept me long enough to secure my full tuition grant & seemed totally oblivious to my welfare, when I appealed the appeal board treated me like I was guilty of some crime & made the entire process more traumatic. As a result I never had the finances to reattempt a degree! :(