What To Do When Mental Illness Help Fails

Sometimes, as in the case of Robin Williams, mental health help fails. It's a minority of the time, but it happens. So what should we do when our help doesn't help? How can we change a treatment failure into a treatment success?

Make Sure it's the Right Kind of Mental Illness Help

When I was in college, I attended a strict charismatic church. The church had its own counseling center, the Highland Center for Biblical Counseling. It was offered as "Christian counseling," as opposed to the "worldly" counseling offered by the university's counseling center.

Red flag number one it's the wrong mental illness help:

I started suffering symptoms of depression my freshman year, and, like a good little robot, sought treatment at the Highland Center for Biblical Counseling. I later learned that the type of counseling they offered, theophostic counseling, doesn't recognize chemical imbalances but blames depression on "lie-based thinking." 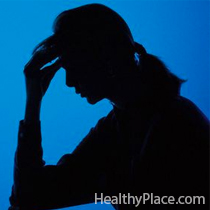 It also has some elements of recovered memories. At the time, the counselors were not required to have mental health training--they were required to read a book, and, if working with victims of Satanic Ritual Abuse, to attend a seminar.

Do Your Homework on Mental Illness Help

I'm a recovering alcoholic. My cravings were terrible, and dissociation replaced the drinking when I first got sober. My psychiatrist put me on naltrexone, an anti-opiate that also treats alcohol cravings and dissociation. That was almost 18 months ago. I've had no problem staying sober, may it stay that way, and wonder what it would have been like had I known about that medication earlier. I might have gotten sober earlier if I'd been on that medication sooner.

Know your symptoms and ask questions about your medication. Research each medication and know how they make you feel.

If All Else Fails, Switch Mental Illness Help

This is an absolute last resort. As people with borderline personality disorder, we're often criticized for switching providers at the drop of a hat. Stick with a provider as long as you can, but if all else fails, switch. You're worth it.

After I was discharged from the Army, I returned to Indianapolis to seek mental health help. Long story short, I ended up at a non-profit, private community mental health center. They at first treated me on a sliding scale, but as soon as I went on Medicare for my disability, they were forced to charge a government-set amount that was more than I could afford.

They responded not by writing it off, but by cutting back on treatment. As you can guess, this was a disaster. Without the mental illness treatment I needed I grew worse. More than once I wandered the streets of Indianapolis psychotic, delusional, and paranoid with their full knowledge. After about a year of a downward spiral, we mutually agreed to transfer me to a different provider. I'm happy with my decision--my current provider is extremely supportive and knows when to intervene while giving me my space.

The right help is out there. It's up to you to never stop looking.

Reflections on Suicide in the Wake of Robin Williams' Death
When a Person with Mental Illness Witnesses a Crime
Peter Hogan
August, 27 2014 at 9:10 pm

BPD is considered the most difficult disorder to treat. 99% of therapists aren't equipped with the knowledge and skill required to provide appropriate support and advice. I've lived 7 years with a BPD partner so got to understand a lot about this disorder. 3 times preventing her suicide attempts and 3 times requiring elongated stays in mental health institutions. The therapist their couldn't help her. She also would not accept the diagnosis. A common trait with borderline. She was sent to a new therapist but she to was not able to assist in any way. I finally talked her into seeing my psychiatrist who assessed her well and confirmed her diagnosis. He told me that treatment for her would be never ending in order to keep her as best possible with the disorder. Keeping up her facade each day drained her. So as soon as she'd arrive home she crumple into a ball and have total neglect for me or our 4 kids. So I had to raise them and support her and run her business. She's stopped taking her meds which isn't a good idea and refuses to attend regular therapy needless to say she's back to her worst and is a negligent parent to our son and her older son has moved out to be away from her and live with his dad and grandfather. Sadly he's very damaged due to both his parents not really wanting him or being in love themselves. She abandoned him by 6 months and his grandfather raised him mostly as neither father of mother wanted or were able to be parents. For my ex she has all the classical symptoms of borderline. Abusive and negligent parents. Constant abuse sexually from Everyman she's been with except me. All others started with rape and she stayed with her abusers. She thought that at least being desired sexually was better than living with a negligent mother. To get away from him she allowed another man to rape her. Same tale. Had affairs and can't stop any advance made towards her by a man. She'd rather be raped again than say no. It's extremely sad. She'll end up alone in later life as most with this condition do. It's also normal for children to wish no contact with her also as all her brothers and sister feel about their parents. I'm sad for her and worried for my son when he's with her as in only to well aware of how negligent she is as a parent. My son who's 6 has already told me he'd like to stay with me permanently. This comes as no surprise. Being able to helps person with depression or worse isn't easy. Finding the right therapist is harder. Supporting them is harder still. Now matter how hard you try. Even when you understand the disorder. It's crucial to have a support network. Most people don't know how to tell friends or family how they feel and have them understand. Very hard to understand something you've never felt for yourself. So educating yourself is good. Supporting is good. Being there is good. The worst thing is to take a depressed person out into the public as they then put on the mask. The facade that tells others I'm ok when really they aren't. I wish everyone that suffers from depression or knows someone that is to educate yourself so you can provide support. Seek help. But choose wisely as a large portion of therapists aren't equipped to help with this issue. So find one who is. Not just any therapist will do. And I wish each and everyone of you the very best for your lives. May they be blessed and happy. :-)

Thank you! This was soooo timely! Going through a situation of trying to find the right help and was on the verge of saying enough because I've tried and keep running into the wrong help. This gives me hope that it's okay to change and it takes more time. It's just a rough process. And my husband has said I've gotten worse since my diagnosis of Bipolar 2 and since I've been on meds. And I've felt the same way and it's extremely frustrating. I feel like I'm doing everything I can, working out, eating healthier, getting sleep, complaint with meds and being social at times and still struggling with deep bouts of depression. I did as you starting off with Binlival counseling and so glad I'm now on a different path because I was taught that basically my illness wasn't real and it really pushed me away from Christianity. Glad you're on the right path and here's to continued wellness!

I am 54. Only had one time that I was truly healed where I could have a life. Now I am worse but cannot seem to find anyone with the same determination and respect and belief in their job to help. It has put me in a Robin Williams situation. :(

Debbie-I prayed for you that you will be able to see clearly thru the lies , please talk to someone

Becky, I been threatened here in knox county, illinois, they are talking about killing me and Im scared, my boyfriends family has id thefters and lookalikes playing in and me and my boyfriend was invited to a picnic and they are going to kill me there and brian his stepson or nephew or whatever threatened to shoot me with a gun. and his s ister lookalike said it was going to amount to me being toilet trashed in other words they move a potty at the picnic and cut me up and throw me in. someone has been into my bank accounts and I am refusing to go to picnic and I think my boyfriend might be talked into going and they were driving him to nebraska I uncovered some kind of plot and i am looking to go to a grpoup home in texas instead but doctor tricked me into signing ward of state papers. and I was bothered by staff here too so I am unhappy in mhy apartment.

Debbie,
I've been where you are, feeling surrounded on all sides by enemies and not knowing who to trust. I later learned that most of it was in my head. My advice is to tell your psychiatrist what you told me and take whatever they prescribe in hopes that it will help. I'll say a prayer for you.