Like many people with BPD, I have several psychiatric diagnoses. While my other diagnoses explain many of my behaviors, they’ve never quite captured my chronic procrastination. The stimulants for attention-deficit/hyperactivity disorder (ADHD) help me focus, and the mood stabilizers for bipolar depression bring me off the floor enough to sit at my desk, but then I just sit there, or actively avoid, focusing on the wrong thing.

I’ve thought, my BPD explains so many of my previously inexplicable symptoms: it must have something to do with the procrastination, too.

The Research on Borderline and Procrastination

As an underserved population, research concerning BPD people in work and school settings (where procrastination is at its worst) is sparse. However, the research supports that people with BPD procrastinate more than just about every group of people with mental illness (Ferrari, Johnson, & McCown, 1995). Beyond the obvious emotional instability, work-related problems in borderlines include a lack of satisfaction with work, perfectionism, and procrastination associated with avoidance (Wille, 2013).

Our procrastination may go beyond the traditional neurotic type of procrastination most research explains; it may be borderline psychosis, or more precisely, dissociation (Corradi, 2013). For the illustration of this point, I happened on a case report in which the worst experience one BPD woman expressed having to deal with was,

. . . a stubborn style of procrastination that she learned to recognize as a precursor to psychotic-like thinking. She became more aware that it was a fear of knowing her feelings that appeared to initiate these episodes of procrastination (Barlow, 1996).

Perfectionism has also been found to be associated with BPD and has been implicated in procrastination and avoidance (Corrie, 2014). Procrastination in borderlines may be a result of "time discounting" and a "limited future temporal perspective" (L’Abate, van Eigen, & Rigamonti, 2011), a distortion (dissociation?) I certainly experience.

Other research suggests a growing gap between the self-discipline we need and the little we acquire (Svoboda, 2013). Not only are parents failing to teach their kids self-management skills due to being hyper-focused on other forms of achievement, but the environment we inhabit today demands an unprecedented mastery of psychological abilities (Svoboda, 2013). If you have a vulnerability in the first place, escape in the form of procrastination would be tempting in the face of such difficulty.

Whether our vulnerability as children was a hypersensitivity or overexposure to stress, perhaps we resorted to avoidance throughout our development and failed to learn how to regulate emotions associated with stressful experiences (McHugh, 2013). Indeed, the perceived inability to tolerate negative somatic and emotional states motivates procrastination (McHugh, 2013). Procrastination "protects" us from states that we interpret to be dangerous or unmanageable, while reinforcing our (mis)interpretation.

Acceptance and Change of BPD and Procrastination 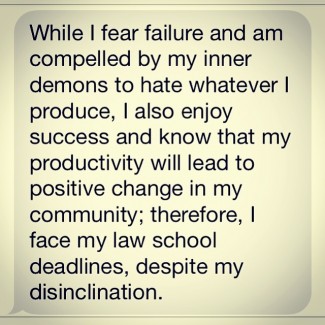 A tendency to procrastinate does not make you a bad or lazy person; rather, it reflects a disease process. Recovery is also a process, but one which requires the self-awareness we gain after the disease has run its course. We receive a diagnosis and slowly recognize our maladaptive behaviors one by one. Sometimes it takes us a while to make the connections, but when we do, we apply the therapies we’ve learned in treatment to each newly understood trait.

Determine the specific reasons you are procrastinating or from where this behavior originated, if it’s helpful. Sometimes, this effort becomes another distraction. Make a pro-con list of this behavior as a function of your life today, if you’re feeling willful and need convincing. Reorient yourself to time, space, and other markers of reality when you start to drift, and reinforce healthy, goal-oriented behavior. And, if your self-loathing is at the heart of your BPD, as is mine, focus on your worthiness and the legitimacy of your contributions.

Now, back to work.

McHugh, R. M. (2013). An examination of the association of distress intolerance and emotion regulation with avoidance. Cognitive Therapy & Research, 37(2), 363-367.

The article was very informative and very helpful.
Thank you very much for it.

So judging from your example of the case report, would you say procrastination among BPD patients can manifest as a state of manic catatonia instead of traditionally non-dissociative ADHD-type procrastination?

Thank you for posting borderline personality & procrastination. Completely understood with your help. I wonder how many home hoarder have this issue.

Do you have any specific questions? Otherwise, I can direct you to some pages around this site for general information.

Thank you so much ;-) This was very helpful!

You're welcome! Thank you for reading!