Schizophrenic and Schizoaffective Suicide Ruins the Lives of Loved Ones

My parents, my brothers and I huddled in a circle. We were in a cemetery. We gathered at the burial of a close friend of the family who had died of suicide. One of my brothers served as a pallbearer at the funeral, helping to carry one of his closest friends. I never again wanted to see in his face the look I saw when he picked up that casket. So now we were at the burial, huddled in a circle. My father said, “We’ve seen what this does to a family. Let’s remember so none of us ever does this to our family.”

I started crying, because I felt the comment was directed at me. I’m the only one in the family who has a mental illness like schizophrenia or schizoaffective disorder, though our friend had neither. One of my brothers rubbed my back. I know my family always has my back.

How I Combat Schizophrenic and Schizoaffective Suicidal Ideation

Since I have schizoaffective disorder, a type of schizophrenia that has features of bipolar disorder, I know I am at high risk for suicide. So I set up a shrine by my bed to remind me of all the precious people I have to live for. The shrine is pictured here. From left to right, 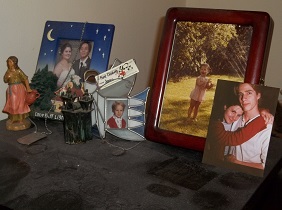 there’s a statue of Mary Magdalene, one of my favorite Catholic saints. Then there’s our wedding day picture with my husband. The picture is framed in a lighthouse design
from Door County, my favorite place in the world. Draped over the picture is one of my dad’s dog tags from the Vietnam era when he served in the Navy. This not only reminds me of my dad, but it reminds me that I am a fighter. Next comes a little gothic looking Tim Burton-esque church. It reinforces the spirituality of the Mary Magdalene statue and it reminds me of how talented I am as an artist and of my sense of whimsy. Next to that is a picture of my 27-year-old baby brother when he was little. He has a mischievously adorable little smirk on his face. I still see that smirk in his smile sometimes. I wouldn’t want to hurt that little boy’s big sister. On top of the picture of my brother is a gift label from my nephew that was written out by my older sister. I don’t want to hurt my sister or my nephews. And draped around the picture and the label is a necklace with a medallion of Mother Mary, who brings me so much comfort. I wouldn’t want to let Her down by ending the life Her Son gave me. The most important part of the shrine comes next. It’s a picture of me as a little girl running through a sprinkler and it was taken by my mother. I wouldn’t want to hurt that little girl. At the far right is a picture of me with my other brother.

I recently told a friend that I’m too stubborn to let myself get too low. And usually, I don’t even have to look at the shrine because my biggest reason for living is sleeping right next to me.

I wish my son could read these posts but his illness won't let him do much of anything. He is also bipolar w/schizoaffective disorder and I wonder how any one with this illness is able to participate in an online community. I would love some feedback about this. You are all so brave!

But what if you don't have anyone to live for or anything that makes you happy enough to keep you here? How do you find those things? I wish I had something to live for. You're very lucky

I know I'm very lucky. Do this exercise: make a list of things or people you have to live for. Even if the things on your list are just things like, "the sky." I didn't mention this in my article, but the sky and the moon are two things I'm deeply grateful for and that keep me going.

Please check out the resources on this link if you're feeling suicidal: http://www.healthyplace.com/other-info/suicide/suicide-suicidal-thoughts-and-behaviors-to…