Trauma Disorders and Cortisol (Part 4): Why It Matters

About a year ago it occurred to me that managing cortisol might directly impact symptoms of Dissociative Identity Disorder (DID) and Post-Traumatic Stress Disorder (PTSD). Because cortisol is an adrenal hormone secreted during periods of high stress, it seemed logical that people with trauma disorders would have higher-than-average cortisol levels. The symptoms of cortisol imbalance supported that idea, and since taking the steps to stabilize those theoretically high cortisol levels could do me nothing but good either way, I launched an experiment. I quit smoking, swore off dieting, and tried to get better sleep. Did it help? 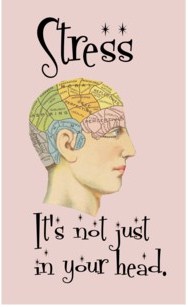 Trauma disorders like Dissociative Identity Disorder and PTSD are born in a climate of overwhelming stress. You might even say that their pathologies are breakdowns in stress management. Which doesn't mean that someone with DID or PTSD is less capable of handling difficulties. But it does mean that their symptoms interrupt and inhibit their capacity to distinguish difficult from dangerous. And I don't mean just cognitively. Because what we think about ourselves, the world around us, and our ability to navigate that world is certainly important. But a funny thing happens when you repair trauma-based cognitive distortions - nothing. Nothing happens. Why?

I believe that cognitive distortions in Dissociative Identity Disorder and PTSD are largely secondary. Physiology comes first. In other words, our minds believe what our bodies believe, not the other way around. It isn't enough to know I'm not in danger if my body is convinced that I am.

A safe, calm human body isn't secreting excess cortisol. Sleeping enough, eating enough good food, and not inhaling carcinogens are all good ways to make a body feel safe and calm. But that's true whether those things have any impact specifically on cortisol or not. That is to say, the steps I took to manage cortisol helped stabilize my Dissociative Identity Disorder symptoms and my PTSD symptoms because they alleviated physiological stress. But it's anyone's guess if that included stabilizing my hormones.

Then Why Does All This Stuff about Trauma Disorders and Cortisol Matter?

We tend to think of trauma disorders like Dissociative Identity Disorder and PTSD as purely psychological conditions. But they're as physical as they are psychological. And that's why my little experiment matters. If nothing else, it reminded me that I'm not just a brain on legs, that I have a body as well as a mind, and that they're kind of a package deal.

The quitting smoking part is pretty cool, too.

Trauma Disorders and Cortisol (Part 3): Managing Cortisol
I Am Crazy: Dissociative Identity Disorder Makes Me Say It
Eloc
November, 18 2016 at 4:17 am

I have PTSD since at least three years and research shows that people with persistent PTSD end up with a HPA axis dysfunction that results in suppressed cortisol most of the time and in response to stress which is why I think you can go along numb fr so long and then just have occassional major blow outs . So I am looking onto whether I have actually developed addisons disease ( burnt out adrenals - due to their high productivity in the early stages ) because of the PTSD - High LDL cholesterol because it is not being used to make cortisol - low blood pressure, inflammation and suppressed cortisol - so my suggestion do a 24 hour urinary cortisol test and an overnight suppression test and establish if you have elevated or suppressed cortisol - you might need the cigareets and coffee after all!

You've written a very thoughtful article on the effects of cortisol, and about what you hoped to gain by reducing your cortisol levels. I'm in a somewhat enviable position for your case because I developed Addison's disease about 15 years ago, losing virtually all ability to produce cortisol. The good news is cortisol is readily available for oral HRT (hormone replacement therapy), and I totally control when and how much I get. What I've learned is that too little makes a noticeable difference, as I feel sluggish and my mind is spacy, often delayed by a day or so of the lowered dose. Too much and I can't really tell, but I'm highly aware of complications of chronic over dosing of cortisol (there is lots of data on this, largely associated with people who have taken cortisol for asthma and allergies. Anyway, I think you overestimate the effect of overdosing in some ways. I normally take 35mg per day, 20mg in the morning, and 15mg at lunch, and this schedule supposedly mimics the normal hormone response of a healthy nominally stressed person. I have to increase my dose if I get stressed, and that is almost totally related to physical illness, such as trauma, the flu, or a cold. I typically bump my dose up 10mg to 30mg for a number of days, otherwise I get quite a bit sicker, and just feel much worse if I don't increase my dosing. I've really had to play with itba lot, and I've mastered my dosing. But I have to say, my dosing has very little effect on diet, anxiety, or depression, at least in the short term, of days or weeks. I'm not saying cortisol doesn't effect me profoundly, as I lived without for about 10 months prediagnoses, and I nearly died (I got the flu and suffered a full blown Addison's crisis). I'm just saying the effects are, on the margin, less profound than I think you state in your write up. Everyone is different, so I could be wrong. I am very fortunate with my condition, as I have exceptional control and have only minor exceptions, allowing me to lead a completely normal life, as long as I get my dosing close to right, especially not under dosing. I understand most people with this condition have many more problems, and don't feel like they have a normal life, so they might tell a different story.

Glad to see you're writing again Holly! Your blog is a great resource for people like me, newly understanding the diagnosis of DID. Thank you!!

What lifestyle changes can I do to increasing my cortisol? I do smoke a LOT. I am also taking very harsh medication for bipolar "State mental health clinic". Unfortinatly ( bad speller lol) the state is aweful. I know my diagnosis is wrong but once they labor you that's it! Will not listen to me about my aweful childhood. PTSD AND GAD mimic each other. Any advice would be great. I am basically my own Dr.(sad huh) If there's anything I can do myself to improve my mental health it would be amazing. Thanks

How do you decipher between DID or Eating Disorder behavior that has such a stronghold of 12 year behavior - separate personalites? what the body is so closely related to irrational fears. what is reccomended when you are diagnosed with D.I.D. Eating Disorder and Post traumatic stress??

Great post! This also goes a long way to indicate why EFT (Emotional Freedom Techniques)are so great for reducing the after effects of trauma. The trauma is held in you body and not controlled totally by your mind. EFT remove the reflexive reactions to situations similar to the initial traumatic event. These techniques have already been proven to reduce cortisol levels! Maybe one day everyone will be taught this simple technique :)

Congratulations on quitting smoking Holly! That's no easy task..... This post was great, really insightful. In recent months we've been working on changing cognitive patterns in therapy, and I've been hitting a bit of a wall. I can change the thought pattern pretty easily, but it has no effect on my dissociative and PTSD symptoms, because their body based. My therapist asks me how I feel when those symptoms come up, and I can only ever answer how my body feels and what symptoms it's experiencing. I don't think she gets that I really don't have any feelings...I can be in a full blown panic attack but not feel panic...just the bodily sensations. Feelings only come when other parts are close to the surface...and even then the feelings feel more physical than emotional. So I totally agree when you say that DID and PTSD are physical disordaers too. Thanks Holly, I have a lot to think about.