Branding has never been more popular in mainstream American culture. Roughly speaking, a brand is the idea a prospect has of a given company. When I say NFL, you conjure up a host of opinions and preconceptions. The NFL is one of the most valuable, and fiercely protected, brands ever created.

The NFL is careful to distinguish between authorized, sanctioned goods/services and off-label, bootleg material. Let’s say you're on your way to enjoy a football game at a major market stadium somewhere in the United States. You walk across the expansive parking lot where people burn chicken parts, drink excessively, and gesticulate with misplaced passion in the mistaken impression that their delirious enthusiasm may somehow influence the upcoming game’s outcome. 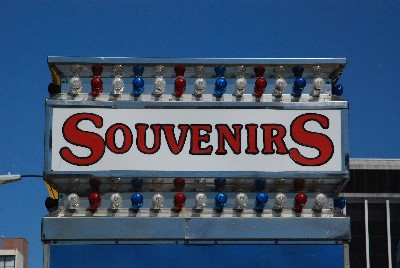 Nearing the stadium you are besieged by a swarm of independent-minded entrepreneurs selling off-market pseudo-NFL memorabilia including T-shirts, sweatshirts, tractor caps, miniature mascots, and more. These unsanctioned items lure gullible consumers with attractive prices but invariably bring bitter tears and disappointment in the long run.

Most likely you are able to resist the temptation offered by these off-market, unapproved keepsakes and venture into the stadium itself where you find a dizzying assortment of NFL-sanctioned memorabilia of every imaginable shape, size, and description. These items do cost more than the goods you saw outside but the NFL imprimatur guarantees quality, workmanship, faithful representation of graphic standards, and adherence to value systems embraced by the teams in question.

It might surprise you to know that the National Society of Whackadoomians (NSW) also diligently safeguards its line of consciousness-raising attire and trinkets. They remind you to be wary of low-grade, knockoff memorabilia being sold at the entrances of psychiatric hospitals, prisons, and office buildings housing therapeutic and psychiatric practices. NSW representatives caution patients and family members alike to always look for the NSW label signifying the merchandise is approved and manufactured according to psychiatric standards of the day.

To help you understand the difference in quality between NSW-sanctioned goods and bootleg goods, I have assembled some taglines from both. Each pair of phrases consists of one NSW-approved phrase and one off-label, ersatz offering. Can you spot the difference? (Answers in next week’s blog.)

Remember to insist on the NSW logo – your assurance of quality!

Psychiatrists Agree Perspective Is Key to Mental Health
AWA Classifies Ice Fishing As A Form Of Mental Illness
Mindy
September, 7 2015 at 9:28 am

I thought that the definition of paranoia is "two noias"

OMG! It's that McHarg fellow, let out of his cage again! Gods be praised. It's Monday, and I have just about been convinced to take life seriously. Almost always a mistake, but, hey, I'm a slow learner, so here I am again...serious.
Then I get to the howler, the break-out-of-your-crazy-place line:
Paranoia – When Regular Noia Just Won’t Do!
And you know, it really won't, especially not here in southern Utah, where we just KNOW that they're out to get us. They're out there, I tell you. I saw them, late last night, rustling around in last year's leaves, under the dark trees across the street. Waiting, watching, hoping for a chance to...
OK, enough of that. Back to the laughter. I've never been a fan of the paranormal, but paranoia - that just makes sense. Regular noia really isn't enough to keep us going!
Now the big decision: post using my real name...or one of those others. Hmmm....

Hi Alistair! Love "paranoia-when regular noia just won't do" I'd love to see it on a t-shirt. Perhaps NSW can adopt "Kleptomania-the need for sticky fingers", or perhaps "DID-Who did you say you were?" In an aside, we have the New Era company in Buffalo. They make official caps for the NFL, NHL, MLB, and I think they do the NBA too. It would be great if they could make an official cap for the NSW also. Have a nice week, looking forward to next weeks blog to find out which slogan is NSW approved. :)