Meds, Moods, and Dignity in Mental Illness: When to Worry?

So, maybe I was wrong. Sometimes you just don't know.

Yesterday Ben seemed a little bit off. We know the signs. He tries too hard to be "sociable"...like asking "how was your day?" three times in the space of ten minutes. His smile seems too forced, his attention to some tasks too focused. He seems to be mumbling under his breath to - to whom? When I ask, he tells me he's just thinking about a song.

Insert sigh here. What might come next? And what can I do?

In the past, moods like this were usually precursors to worsening symptoms, and a sign that Ben was off his medications. But now...now we ourselves supervise the twice-daily regime, and Ben has been remarkably relapse-free for over 18 months.

Still - something's up. Something is not right. But what? And why? 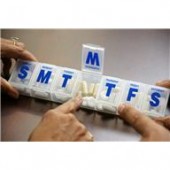 So last night I immediately suspected that Ben was somehow managing to decrease the dosage of his medication -despite our agreed routine of supervision and required after-dosage "sitting time" that has worked so well for over a year. Before I realized it, I was reminding Ben that in order to stay with us he must keep that agreement, and that I was going to order a blood test to determine therapeutic levels of his medication. I stopped just short of outright accusation - but barely. Old habits - and fears - die hard. They lay in wait until moments of doubt creep in.

The next morning, after a good night's sleep, Ben seems better. Was it because I had watched him carefully last night? Or had he just needed sleep? We talk about the fact that his friend "J" had spent the evening with another friend instead of Ben, and he admits that he had also been lonely.

So - had I been wrong to blame the meds? Doesn't he have the right to moods, too?

But it had seemed worse than that. When certain signals appear, due to past experience, my mind goes immediately to medication compliance. Is Ben somehow managing to, once again, fool me into thinking he is taking meds? Is he, perhaps, watering them down when I'm not looking?

Are we going to go back down the "Chutes and Ladders" slide, back again to Square One at the Emergency Room?

We live knowing that that "other shoe" can always fall again. Is it about to do just that?

That is what goes through my mind - but what is going through Ben's mind? Is something else going on?

Schizophrenia Affected by Stress and Stimulation, too

I've recently attended two schizophrenia conferences, where I was reminded that it is not "just about meds" - that stress and stimulation levels also have a huge effect on the symptoms of schizophrenia.

What else could be happening? And - can we help?

These things come to mind:

Ben, even as a small child, seemed affected by changes in routine - upcoming holidays, birthdays, end or beginning of a school year. No amount of meds can change his basic nature, perhaps. And I am glad of that, since his nature is sweet and caring - but the illness, when not treated, can mask much of that with confusion.

So - what's the answer? I will wait and see - and play both sides of the prevention game.

We all get moody, affected by change, and under the weather when we have a cold. The body (including the brain) works under delicate balance, and my fervent hope is that this shall pass without having to face a battle about meds, or a change in them.

But, as always, it is what is is - and we will manage it somehow. Still, I carry the uncertainty inside me right now, as we wait it out and wait for Ben's mood to settle back to the "new normal" that we've been grateful for, considering the alternatives we've lived through.

Today Ben slept a lot more. And the blood test will be ordered.

Schizophrenia and the Social Brain: Why It Matters
BeST Practices in Schizophrenia: Build on Family Strengths
Monica
May, 6 2013 at 9:08 am

Terrific article and info. We do not deal with schizophrenia, and my daughter is pretty stable these days. But I so understand and appreciate what you said about "allowing the dignity" to have moods. My heart and mind instantly jump back to terrible times, even if she is just frustrated and happens to close a door a little to hard. I find that I have to mentally walk myself through the process. Some days it's easier to convince myself that I don't need to panic, some days it's not. I've never put those words to it before though, and I appreciate your thoughtfulness in doing so.
Monica

Randye,
I think the combo of wait and see and supervision of meds, maybe with a closer check of cheeks, tongue to make sure they are swallowed. But, it is a tightrope and so stressful for the family to be vigilant without being hyper-vigilant. Perhaps if he says he is singing, ask what song or bring the conversation around to music. Folks who have all assorted mental health disorders are affected by events, moods, hormones, sleep, frightening events.
For example, been watching or listening to the Boston bombing stuff? We are inundated by scary words, fear-mongers, etc. If an individual has paranoia as part of normal symptoms, the news can trigger an insecure, frightening state of mind causing paranoia to re-emerge. I can't imagine being constantly told my paranoia is not real and then watching all these people going on about, well, being paranoid of "the next strike". Yes, skipping or cheeking meds, a needed re-evaluation of meds are commonly the cause in changes. But, remember, the meds do not erase schizophrenia or any other mental health disorder, they do help people become more normalized in feeling and action, but they don't cure the illness.
Even those of us who are in counseling, on meds for depression and anxiety become depressed and anxious sometimes, and it is likely more intense than someone without the illness. A conversation validating one's loneliness, fears, etc helps, it is one of the tools.
I truly hope all goes well and you all get through this tough time. Meditate, soothing music, get enough sleep, take care of your own self too!

Thanks Laura, that is all great advice, for me and for all families, and anyone living with mental illness.
As it turned out, Ben came down with the flu two days after I wrote this post. I'd never realized how much a physical ailment can affect brain chemistry....so much more evident when there is schizophrenia in the mix. Once the fever arrived and then began to break, Ben's mental state seemed much more stable. Keeping an eye, of course, but that was definitely part of the issue I think.
Following your tips, though, and thanks for your perspective!
Randye

Great article, and you are so right. Past experiences have us conditioned to always be on alert, hyper-vigilant. I'm so glad you pointed out in one of your steps to allow our loved one the "dignity to have moods" just like we would allow ourselves or anyone else in the home to have an off day. We're so used to being on alert for those off days to become an episode we very carefully work to avoid. We walk a fine line, to be sure. Another thought on what can contribute to the behavioral change is hormones, which is what my daughter's doctor shared ... stress, growth spurts, monthly cycle changes will all affect the delicate balance of neurotransmitters.

Thanks, Anne - and I think men have hormonal issues as well, so that can definitely be part of the equation! (But especially, I agree, for females in our families). Appreciate the added perspective!
best, Randye