Discipline, School, and the Mentally Ill Child in Handcuffs

Have you heard this story? About the 6-year-old kindergartener who, throwing an epic tantrum, was handcuffed by police and escorted to the police station? Who has been suspended from school until August--i.e., the remainder of the school year? Have you heard the comments from the general public agreeing with the actions taken?

I have, and I am outraged. If you're not, you should be. 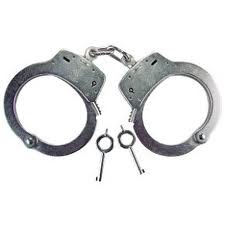 My son, Bob, threw a tantrum like Salecia Johnson's, also in April of his kindergarten year. Bob, also age six at the time, climbed on bookcases, jumped from shelves, damaged books, threw desks, and caused "simple battery of a schoolteacher and criminal damage to property" (the charges initially made upon Johnson, but later dropped "due to her age"). Having cleared the room of other students, Bob was eventually escorted to the principal's office. I was called--the police were not.

The Georgia school claims it was unable to reach Johnson's parents after "multiple attempts," prompting their decision to call police. I question whether or not an alternate contact was available to the school, as is a universal practice among public schools--especially considering the police contacted Johnson's aunt, who picked her up from the station.

The Georgia police chief maintains his officer did the right thing, claiming it's "standard procedure" for any police escort to be handcuffed behind the back, "regardless of age."

Do most six-year-olds have meltdowns that extreme? No--unless there is a significant problem that needs to be addressed. Should a child with an obvious psychological problem be treated like a common criminal? I don't think so.

Four years ago, when I arrived at Bob's school, he was best described as feral. I had to carry him, kicking and screaming, to the car, and had to physically restrain him just to get him into his seat and prevent him from jumping out of the car. I drove him to my office, where he again caused "criminal damage to property." I didn't call the police. I called a children's psychiatric hospital, and he was admitted that day. 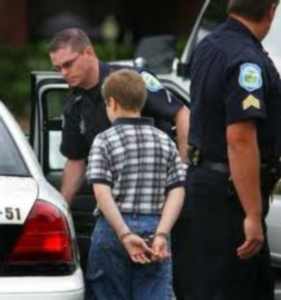 I admit, I was lucky--I had a teacher and principal familiar with Bob and who were willing to work with us to help him, regardless of what kind of mayhem he caused. I had a principal who was calm to the point of catatonia and knew the best reaction to Bob's rages was as little reaction as possible. I had no idea what to do with him, but I knew he had a serious problem that needed medical attention.

I don't know Salecia Johnson or her parents. I'm not familiar with her school. But I hope all of them use this as a starting point to get her help, if they haven't already.

What bothers me most about this story, however, is the reaction of the public. When I first heard this story on the radio, the station was flooded with calls agreeing with the action taken--basically stating, "lock her up."

APA Reference
McClanahan, A. (2012, April 19). Discipline, School, and the Mentally Ill Child in Handcuffs, HealthyPlace. Retrieved on 2022, September 28 from https://www.healthyplace.com/blogs/parentingchildwithmentalillness/2012/04/discipline-school-and-the-mentally-ill-child-in-handcuffs

Sex Education and the Child with Mental Illness
Discipline, School, and the Mentally Ill Child in Handcuffs: Social Stigma
Coach
December, 20 2012 at 4:24 am

Police will do what is necessary to (1) Protect others (2) Protect the instigator (3) Protect them selves (4) Protect Property and do it pretty much in that order.
Then they have transportation Issues to deal with. They did nothing to complain about and may have saved the child from serious injury.
When I was a child a classmate went berserk and was handcuffed and beat his head on the inside of the police car. One of the officer sat in the back and held him while the other drove. They probably saved his life twice.

Just to explain a little something, being suspended until August, the end of this school year may seem extreme, but here in Georgia we only have less than a month left of school. So in actuality her suspension is less than a month.

I hadn't heard this story. It seems ridiculous to put handcuffs on a 6 year old. My son has adhd and was getting into trouble in the lower grades. He was never as bad as the story but if he was I would be outraged if they put my 6 year old in handcuffs. Thanks for sharing this story.
Michele