Symptoms of DMDD: Why Is My Child with DMDD So Mean? 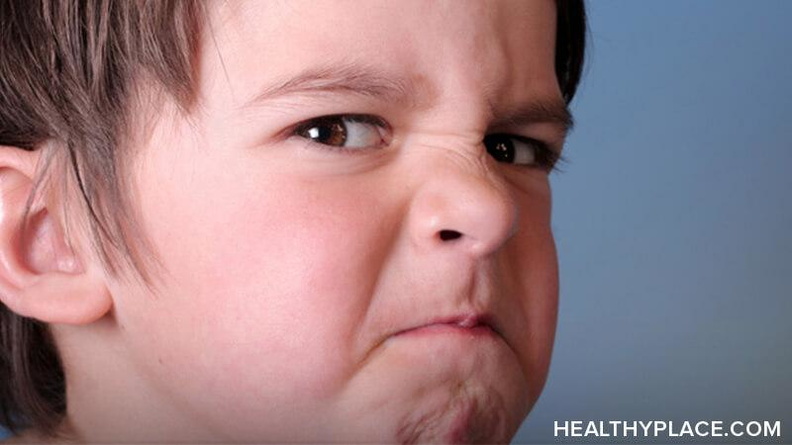 The main symptom of disruptive mood dysregulation disorder (DMDD) is chronic irritability. "Irritability" is a vague word, though. It doesn't adequately describe how angry and mean our kids with DMDD can get or how demoralizing it feels. As parents, we work hard to raise decent human beings, then a DMDD outburst erupts and that decency seemingly flies out the door.

I don't remember what started my son's most recent outburst, all I know is that he clenched his fists and shook until, like a teapot hitting full boil, he started screaming. He threw things, swore like a sailor, and shouted the meanest vitriol, mostly about his parents.

I kept thinking how much easier these outbursts would be if he was just nicer. Breaking things and shouting I can handle, but it's hard to find compassion in the face of verbal abuse and threats.

I've discussed the differences between oppositional defiant disorder (ODD) and DMDD before. Some professionals view DMDD as a more severe form of ODD. You won't see meanness as a symptom of DMDD, though, so you have to look at ODD to find it. Along with frequent temper tantrums, questioning authority, and active defiance, ODD includes these key behaviors:

A child does not need to have every symptom to be diagnosed, so it's possible that some children with ODD are not spiteful and vindictive. Perhaps, too, children like my son happen to straddle more closely that line between ODD and DMDD than do other children, so I see the meanness more.

There's always the possibility, too, that some kids have a naturally mean temperament, regardless of diagnosis. I sometimes wonder if mine is naturally crabby. I like to think, though, that 10 years old is too early for him to have a fixed personality. So even if he's naturally mean now, there's still hope, right?

How to Manage DMDD and Meanness

First, if your child struggles with other disorders, you may need to tackle those first. My son has severe attention-deficit/hyperactivity disorder (ADHD). It can take him hours just to get pants on. He's not going to discuss positive interpersonal interactions if he can't even pay attention to pants.

Second, there are no medications specifically for the symptoms of DMDD or ODD. Some medications help manage symptoms like irritability or mood instability, but medication alone may not manage all of it.

These are the primary suggested methods of managing oppositional and defiant behaviors. In-home family behavioral therapy was helpful with my son. Children like him can't learn coping skills then remember to use them days later. However, a family therapist can observe interactions as they happen and coach a family through them until effective behaviors become more habitual. Now that it's over, we've referred him to individual therapy at school with the hopes to keep up the learning.

As parents, we often get stuck in negative feedback loops. Our kids' angry behavior makes us angry which makes our kid angry, over and over, into eternity (Stop Emotion Contagion with Mentally Ill Kids). We need help building effective responses to challenging behaviors so that, down the road, our kids adjust their behaviors.

It's hard work. As adults, some of our learned behaviors are deeply ingrained. That, and skills we've learned for managing mean people are skills we use with grownups, not with kids. Some of us never dealt with behavior disorders before our own children, so we're at a loss.

We often joke about how we wish children came with manuals. Turns out ours kind of do. There are methods for managing kids with DMDD, we just need to wade through the meanness and accept professional help to manage it.

APA Reference
David, M. (2018, February 20). Symptoms of DMDD: Why Is My Child with DMDD So Mean?, HealthyPlace. Retrieved on 2022, June 28 from https://www.healthyplace.com/blogs/parentingchildwithmentalillness/2018/02/why-is-my-child-with-dmdd-so-mean

Melissa David is a mother based out of Minnesota. She has two young children, one of whom struggles with mental illness.The support and wisdom of other parents proved invaluable to her in raising both her children; and so she hopes to pay it forward to other parents via Life With Bob. You can find her on Facebook and Twitter.
Teen Dating Violence and Your Teenager with Mental Illness
Managing the Stress of Change for Your Mentally Ill Child
Angelia Owens
March, 10 2019 at 7:30 pm

I have a 8 year old daughter who is in the 3rd grade and in which she was diagnosed with DMDD when she was in kindergarten, I have a hard time with her diagnosis at my ropes end , any suggestions to make it easier for our family?