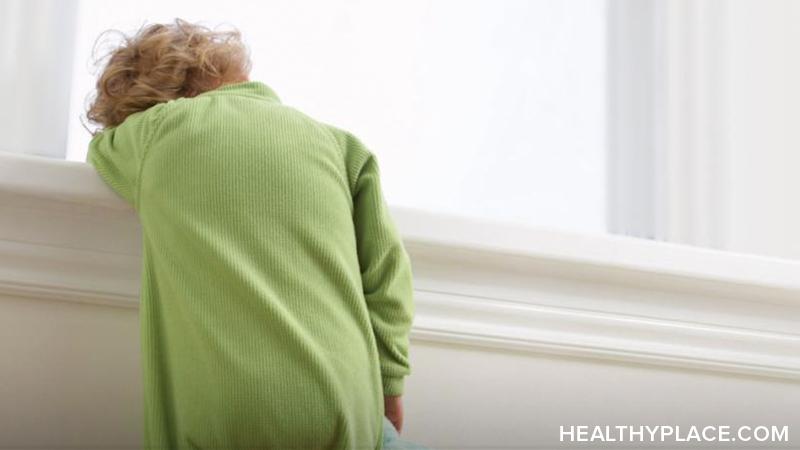 Separation anxiety in children is an intense fear of being separated from a loved one. It's considered normal in infants and toddlers. In older kids, it may be a sign of an anxiety disorder. As the parent of a child with disruptive mood dysregulation disorder (DMDD), I often find myself wondering if what he experienced in early childhood was separation anxiety or the signs of the emotional disorder to come.

Per the Diagnostic and Statistical Manual of Mental Disorders (Fifth Edition), symptoms of separation anxiety disorder are:

I used to hide from my child. In kindergarten, I'd drop him off at school, then sneak off or run so he wouldn't see me leave. Otherwise, he'd chase me, screaming. Sometimes, he'd chase my car down the street. Teachers would have to drag him back into the school.

This doesn't even count the entirety of his pre-school years spent crying and screaming at every drop-off and pickup. Meanwhile, his younger sister didn't have a problem. Even as a baby, we dropped her off and she was fine. My son would be screaming at age five while his two-year-old sister joyfully ran off with friends.

My son was not anxious about separating. He was having classic DMDD emotional outbursts. At that age, though, they could've been seen as regular temper tantrums. (Even if they didn't feel regular to me at all.)

Looking back, my son wasn't concerned for his safety or mine beyond what was typical. He had difficulty sleeping, but that turned out to be related to his attention-deficit/hyperactivity disorder (ADHD). My son was not clingy at home. He loved sleepovers with various family.

In preschool, his teachers said he loved being there. He'd scream and cry when I left, but the moment he was distracted, he'd go about his business. When I picked him up in the evening, he'd erupt because he was mad he had to leave a fun activity. He couldn't handle disruption. To this day, even, disrupting his routine can trigger DMDD outbursts.

If You Fear It's Separation Anxiety

If your preschooler is exhibiting intense separation anxiety, seek out professional help. There are options for family therapies and behavior plans to help your child manage it. Hopefully, he then grows out of it.

If you get an assessment, and it's not separation anxiety but emotional dysregulation, that's good to know, too. Disruptive mood dysregulation disorder is not typically diagnosed before age six, but if disruptive emotions are on the radar, it may help catch emotional disorders earlier. You can request a neuropsychological exam, which helps detect ADHD or other disorders.

Meanwhile, remember to comfort your children. If you're angry and completely baffled by the anxiety, imagine how your child feels. Seperation anxiety doesn't go away in a day. It requires regular comfort, and you're the best person to provide that.

Melissa David is a mother based out of Minnesota. She has two young children, one of whom struggles with mental illness.The support and wisdom of other parents proved invaluable to her in raising both her children; and so she hopes to pay it forward to other parents via Life With Bob. You can find her on Facebook and Twitter.
What Made Residential Psychiatric Care Best for My Teenager?
Twice Exceptional: Mental Illness and the Gifted Child