For veterans, unemployment is the biggest predictor of posttraumatic stress disorder (PTSD) symptom severity, says a new study. The PTSD symptoms may be combat-PTSD-related or sexual-trauma-related, but either way, veteran unemployment predicts the severity of PTSD symptoms more than even indicators like depression. Organizations that employ veterans, like the one I mention below, may actually help those suffering from combat PTSD.

The number of unemployed veterans exceeds 200,000 in the United States and the unemployment rate for veterans under the age of 25 is 29.1%. And even of those veterans who have found employment, many are underemployed and are not recognized for the skills they have garnered in the military. 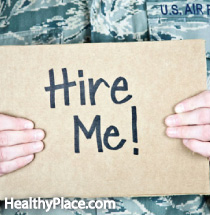 Many veterans return home from combat not just with scars from the battlefield but also with issues like combat PTSD to deal with. Moreover, returning to civilian life, often as a changed person, takes a toll on a veteran psychologically and emotionally. Veterans may feel like they no longer have a purpose or a “mission,” if you will. Veterans say they lose themselves once they return home.

An Unemployed Veteran Decides to Save African Wildlife

This is something that United States Marine Corps veteran Ryan Tate experienced. However, Tate used that situation as an impetus to start Veterans Empowered to Protect African Wildlife, or VETPAW.

Learning about the brutality of the poaching crisis and the rangers who are dying protecting wildlife, hit me harder than anything I’d ever seen—and I’ve seen some crazy stuff. I realized I have the skills necessary to help save animals and the people who risk their lives daily.

Tate knew that unemployed veterans had the perfect skillset to help conserve endangered species and turn the tide on the poaching crisis in Africa.

VETPAW provides meaningful employment to post-9/11 veterans, utilizing their expertise to train and support Africa’s anti-poaching rangers to prevent the extermination of keystone African wildlife, and the disastrous economic and environmental impact it would have.

In other words, not only do United States veterans become employed, they are employed with a meaningful mission in mind.

The researchers who did the study are not claiming causality in any way, there is simply a correlation between veteran unemployment and PTSD symptom severity. That said, it is reasonable to think that meaningful employment for veterans, particularly those with combat PTSD, may help returning veterans psychologically. While we don’t know that for a fact, what we do know is that veterans are a valuable addition to the civilian workforce and their work to defeat poaching in Africa is just one example of that value.