"As a child, I learned from the role modeling of my father that the only emotion that a man felt was anger....."

Codependence: The Dance of Wounded Souls   by Robert Burney

My earliest memory of my father involves a trivial incident that happened when I was 3 or 4 and playing with some cousins.   The incident was trivial but what I am feeling in the memory is not trivial at all.   In that first memory of my father, when I was just a little boy, what I feel is absolute terror.   As I sit here writing this, tears come to my eyes because it is very sad that little boy was so terrified of his father.

My father never beat me, or physically abused me (with an exception that I will note in a few moments) but he did rage.   He was/is a perfectionist and he raged when things did not go the way he wanted.   I was just a little boy who couldn't very often do things perfectly.

The reason my father raged is that he was raised to believe that the only emotion it was acceptable for a man to feel was anger.   He had/has absolutely no permission to feel scared or hurt or sad.   If he feels any of those emotions he turns them into anger.

In general, in this society, we are taught to approach life from a position of fear, lack, and scarcity.   Coming from a place of fear and scarcity causes people to try to be in control to protect themselves.   My father got a multiplied sense of this outlook on life because he grew up in the Great Depression.   It doesn't matter that he has made lots of money over the years and has a lot of security now - he still reacts from fear and scarcity because that was his childhood training and he has never done anything to change it.

My father always wants to be in control because of his fear.   One of the results of that is that he also doesn't have permission to feel too happy because being too happy feels out of control.   Who knows what disaster might lurk around the next corner?   Don't let your guard down for a minute!

What a very sad way to live life.

My father is an emotional cripple.   And he was my role model for what a man is.   I don't remember being told big boys don't cry or any such thing - but I sure remember that my father never cried.   There was an incident that happened when I was about eleven that I understood only after I got into recovery.   At my grandmother's funeral, my father's mother, I started crying uncontrollably and had to be taken outside.   Everyone thought I was crying about my grandmother but that wasn't what I was crying about.   I started crying because I saw my uncle cry.   It was the first time in my life I had seen a man cry and it opened the floodgates on all of the pain I was carrying.


How sad it is that that little boy was hurting so much.

My father has never said "I love you" to me.   In recovery I have said it to him directly and the best that he could do was to say "Same here."

How sad that my father is not capable of saying "I love you."

At a point in the very beginning of my Codependence Recovery, I wrote a letter to my father - not to send to him - to get in touch with my feelings toward him.   I wrote a sentence that I intended to say "Why was nothing I did ever good enough for you?"   When I looked at the paper what it said was "Why was nothing I did ever good enough for me?"   That was a real turning point for me.   It caused me to realize that, though my father traumatized me as a child, I was the one who was perpetuating what he taught me and perpetrating on myself.   That was when I really started to understand that healing is an inside job.   Because, though my father is probably never going to say 'I love you' to me, I can say it to myself.

How sad that I couldn't learn that I was lovable from my father.

About the physical abuse thing.   Although my father did spank me on the bottom when I was a kid, I do not consider that to be physical abuse.     I did not feel any lasting trauma from those spankings so I personally do not feel that they were abusive or excessive.   What my father did do that was traumatic and excessive is take me down and tickle me.   I hated that.   I hated it so much that by the time I was about 9 or 10 I heard someplace, in some context, about mind over matter and I willed myself not to be ticklish anymore.   I realized in Recovery that tickling me was probably the only way it was okay for my father to be physically intimate with me.   He certainly would never hug me - so his way of being physically close to me was to tickle me.

How sad that my father's only way of being physically intimate with me was abusive.

So, you might have guessed by now that I am feeling a lot of sadness about my father as I write this column on Father's Day.   I am also feeling very grateful and blessed.   I do not have to be like my father.   Because of the wonderful miracle of the Twelve Steps, the knowledge of Codependence and the tools of Recovery that are available to me, I can change my childhood training - I do not have to be like   my father.   My father has never had the opportunity to honor and own his fear; never had the blessing of grieving - with heaving sobs and streaming tears - the pain and sadness of life.   Because my father never got to do these things, he has never really owned himself.   He has never truly been able to be fully alive - he has endured, he has survived - but he has never honored the pain of life or felt the overwhelming Joy of being alive.   He has never truly lived.

How sad that my father has never been able to own the sadness of life so that he could feel the Joy of it.   How wonderful that I can cry tears of sadness for my father and for that little boy who was so terrified of his hero. 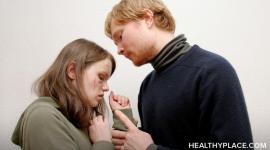 What is Co-dependency, Co-dependence?
An Adventure in Love - Loving and Losing Successfully

Tips on How to Have Healthy Relationships