Calling Forth The Soul

A philosophical look at the loss of soul and our endeavor to find our soul and care for it.

An Excerpt from BirthQuake: A Journey to Wholeness

"In the last decade of the twentieth century, perhaps in response to the magnitude of our global crisis, spirituality has been coming down to Earth..." (Ronald Miller)

Thomas Moore, best-selling author, philosopher, and psychotherapist, laments that the great malady of the twentieth century has been the loss of soul. Yet his book, "Care Of The Soul: A Guide To Cultivating Depth And Sacredness In Everyday Life," quickly rose to the bestseller list, indicating that while he might be right about the loss of soul, many twentieth century inhabitants eagerly endeavor to find it.

Moore maintains that when the soul is neglected, rather than simply fading away, it demonstrates its woundedness symptomatically in addictions, obsessions, loss of meaning and violence. Most therapists attempt to isolate or eradicate these symptoms, failing to understand that their roots often lie in our lost wisdom about the soul.

Moore's understanding of psychotherapy, evolving over more than 15 years of practice and study, has come to involve bringing imagination (which he perceives to be the instrument of the soul) to areas that are devoid of it. It's Moore's belief that it is the expression of this void that is manifested by our symptoms.

Further, he notes that in our modern world we've separated religion and psychology, spiritual practice and therapy. In his view, spirituality and psychology need to be seen as one. This shift would occur in a number of ways, one of which would be a commitment to the process of ongoing care of the soul rather than engaging in efforts to cure it.


According to Moore, caring for the soul begins with an observance of how the soul manifests itself and operates, and then responding to what the soul presents. This involves not moving to root out that which the soul expresses and is seen as symptomatic, but to, instead, explore its purpose and value. Moore invites us to regard the soul with an open mind in order to discover the wisdom that can be found in pain as well as the call for changes that are given voice by such symptoms as depression and anxiety. I've have learned both as a psychotherapist and in my own personal life that pain (while I never welcome it) is often a prepatory path that can lead to possibility as my own suffering served time and time again as a catalyst for growth.

One effective technique Moore shares in caring for the soul is to look with particular attention and receptivity at what the individual is rejecting, and then to speak favorably about that rejected element. For instance, a therapist might point out to a client that in her frantic activity day-in and day-out, the only thing that seems to allow her to pause and rest are her headaches. James Hillman points out that at a redemption center, you get something in return for bringing in an item that is often perceived as worthless. I often suggest to participants of my workshops that they imagine that they have taken a particular problem or difficult circumstance to the redemption center. I then ask them to consider what they might have received in exchange. Very often, participants are struck by the unrecognized gifts that they've acquired during even some of their most painful times. I recall in particular, a very successful and self-possessed man who shared that after he was injured in an accident and could no longer make his living doing what he had trained long and hard for, he was forced to change occupations. At first he felt lost and absolutely devastated. Eventually he went back to school to become a spiritual counselor and maintains that his life has been immeasurably more satisfying since then. Another participant recalled that it was only after suffering from a painful period of depression that she was able to reach out to others and build intimate relationships that she'd never found time for before. Hilman asserts that by examining these unexpected gifts, "The noisome symptoms of every day can be revalued and their usefulness reclaimed."

Moore also cautions against splitting experiences into good and bad, maintaining that much soul can be lost in such splitting, and that the soul can be aided in its recovery by reclaiming much of what has been split off. In elaborating on this, Moore turns to a version of the work of Jung's theory of shadows. Jung believed that there were two kinds of shadows: one consisting of the possibilities in life that are rejected because of certain choices that we've made (for example, the person we chose not to be), which is the compensatory shadow; and the other, darker, absolute shadow. The absolute shadow represents the evil existing in the world and within the human heart. Jung believed, and Moore concurs, that the soul can benefit from coming to terms with both kinds of shadow and learning to appreciate even the quirks and perversities of the soul. He adds that sometimes deviation from the usual offers its own special revelation of truth. Dawn Morkova wrote in, "No Enemies Within" that, "our wholeness is based on reclaiming those aspects of ourselves that, due to our personal circumstances, we've had to leave along the way."

Moore distinguishes between cure and care by pointing out that cure implies the end of trouble, while care offers a sense of ongoing attention. He believes that the approach of psychotherapists would change dramatically if they thought about their work as offering ongoing care rather than a quest for cure. Moore reminds us that problems and obstacles can offer us opportunities for reflection and discovery that might otherwise be overlooked.

Moore is far from a solitary voice in the wilderness (so to speak) in regards to the value he places on honoring all dimensions of the self, including our painful regions. David K. Reynolds, in his book, A Thousand Waves: A Sensible Life Style for Sensitive People," proposes that traditional Western psychotherapy fails to adequately acknowledge the importance of our need for unity among all aspects of ourselves. Reynolds advocates an Eastern approach, which aims at helping us to honor our natural selves more fully, and more specifically - to help us to become more natural again. He points to the nature of water and suggests we become more like this precious liquid observing that when the weather is warm, water becomes warm, and when it's cold outside, water too turns cold. Water doesn't wish that it was a different temperature, nor does it pretend to be other than it is. It merely accepts its present state and continues to flow. Unlike water, laments Reynolds, people deny reality. They also struggle with their feelings and hamper themselves by focusing on the way things should be or might have been. Water doesn't fight obstacles, says Reynolds, it simply flows around them, not getting distracted as people so often do by their feelings. Water is flexible and adapts to the particular circumstances it's in. Water flows at a natural pace. People on the other hand, appear to be dashing around attempting to manipulate their lives or feelings into fitting into their particular notion of how things ought to be or how they wish them to be. Reynolds reminds us that feelings are neither good nor bad, they simply are. The best way to deal with painful feelings according to Reynolds, is to simply recognize them, accept them, and then carry on. Because feelings keep changing, he recommends that an appropriate goal for both therapy and every day life is to: " ...notice and accept these changes in feelings while keeping steadily on about doing the things that will get us where we want to go. Like water does."

Nietzsche, the German philosopher, made a decision at some point in his life to love his fate. From that point on he responded to whatever happened to him by saying to himself, "this is what I need." While I fully believe in the tremendous value of Nietzsche's courageous approach, I'm a long way from being able to adopt it. I question too much, and still carry too much fear. What I have been able to embrace is James Hillman's recommendation that what ever your experience, "You ask yourself: How does this event bare on soul making." 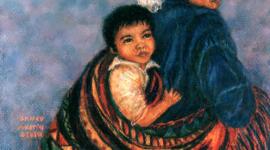 Pass It On
Cliff Bostock on 'Soulwork'

How to Relax and Cope with Stress