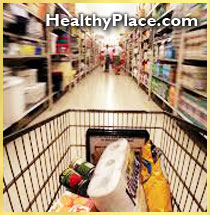 Let's set the scene: You're in the grocery store squeezing melons and all of a sudden you feel a wave of dizziness wash over you. Your palms begin to sweat, your heart races, and you become short of breath. You don't know what's causing this, but one thing is crystal clear: You have to get out of there!

You leave your shopping cart, your coupons, your grocery list (and maybe even the kid you have sitting in the cart!--just kidding!) in the middle of the aisle and race out of the store. And it's not until you're on your way home that these symptoms begin to subside. Sometimes you'll feel brave enough to go back to the store, but as you approach those melons again the memory of what happened the last time invades your brain and the symptoms reoccur. So it's exit, stage right once more. The next time you need to go to the store, the memory of that horrible feeling becomes overwhelming, so you get your spouse/neighbor/relative to do the shopping for you. Thus begins the chain of avoidance.

Next scenario: You're standing in line at the bank, tapping your foot impatiently at the little old lady in front of you counting out 86 years worth of pennies. You look around, check out the bank manager's new suit, stock up on deposit slips (and any other freebies sitting on the counter), look out the window. All of a sudden, the thought occurs to you that this little old lady could take a very long time to make her transactions and you could be trapped in that line forever!!!

Instead of brushing the thought away with a "Nah never happen," you begin to obsess on the idea of being trapped. The dizziness, palpitations, sweating and shortness of breath begin again and the next thing you know, you're halfway home, driving 90 miles per hour, deposit slips fluttering in the breeze. You think, "I sure don't want that to happen again!" and the chain of avoidance continues.

So now there are two places you won't go...

Once this chain of avoidance begins, it snowballs until you find there's very little you're comfortable doing. Your "safety zone," or territory, continues to shrink until even the thought of going too far from home can bring on the symptoms. And before you know it, you're reduced to the perimeters of your home.

It's not uncommon for phobics to shrink their territory to the point of becoming uncomfortable by simply looking out a window. Suddenly, all those tasks we took for granted: bringing in the mail, taking out the garbage, grabbing the Sunday paper off the front step, become Herculean in nature. And we simply can't.

Actually, it's not all that sudden. It takes a long time, even years, to become sensitized. But once that chain of avoidance begins though, it's very difficult to stop it. Sometimes it's so subtle, we don't even realize it is happening until it has.

Another of the extra-added attractions of agoraphobia is one of my personal favs, anticipatory anxiety. This involves not only becoming anxious or panic-stricken in the actual event, but anticipating how you're going to feel, react, etc. This can bring on the same or higher levels of anxiety than the actual situation itself.

For example: If you're socially phobic in conjunction with being agoraphobic, the thought of someone being in your home is particularly uncomfortable for you. And one stormy winter day your heater cuts out. Now, you have to call a repairman to come and fix it. The thought fills you will terror. Your mind begins to race: "What if there's something horribly wrong with the heater and I have to get it replaced, and he'll be here for days, and I'll have to hand him tools, and feed him dinner, and put him up in my guest room, and he'll like it here so much he'll never leave?"

So now, before you even make the phone call, you're running around with your hair on fire, and have yourself so juiced, you'd rather freeze to death than have that repairman in your house. You finally work up the courage to make the call, the repairman gets there only to find it's simply the pilot light that has gone out and it's a 3-minute fix. So, you've spent an entire day panicked to the eyeballs, when in fact, the reality wasn't all that bad. You coped, got your pilot light lit and he left. End of story. But the anticipatory anxiety really had you going and made you miserable for the better part of that day.

Another classic symptom of agoraphobia is "what if" thinking (which ties in very nicely with anticipatory anxiety). Phobics are extremely intelligent, creative and imaginative people, but we allow those wonderful qualities to work against us. It's because we have that incredible imagination that we can see every conceivable side to any given situation (I used to tell myself that if I ever recovered to the point where I could travel, I was heading for Sweden to have my imagination surgically removed!). Let's set another scene:

You're stopped at a traffic light, one car ahead of you, and a few behind you. You drum your fingers against the steering wheel, impatiently waiting for the light to turn green. Suddenly, the thought floats through your mind: "What if this light is broken and I am stuck here forever??? (Phobics are also absolute thinkers: We don't have many gray areas, just black and white. And everything is extreme, like "never", "forever", "always.") What if I have a heart attack and the ambulance can't reach me because of all these cars around me? What if the car in front of me breaks down and I can't get around him?" (You get my drift here.) Now, the three other non-phobic drivers stuck in that line of traffic are calmly distracting themselves by filing their nails, reading the paper, cleaning out the glove box and digging out the spare change from between the seats, while YOU are having a grand old time making yourself nuts by coming up with scenario-after- scenario, each one worse than the last. So you're off to the races again, adrenaline pumping merrily away.

Okay, now that I've scared the beejeebers out of you, let me give you the good news...

YOU ARE NOT CRAZY!

YOU ARE NOT CRAZY!

Say that to yourself 50 times a day until you start believing it. Paste it on your bathroom mirror and read it while you're brushing your teeth. Hire a sky-writer to fly over your house and put it up there in 50-foot tall letters if you have to. But believe it. It's the truth.

Wait a sec... I feel another truth coming on...

YOU ARE NOT GOING TO GO CRAZY EITHER!

Repeat the same procedure, as above, for this one, too.

Agoraphobia is caused by a combination of heredity and environment. It's a behavioral disorder, not a mental illness. There are those of us with personalities pre-disposed to being phobic. We're highly intelligent, creative, imaginative and sensitive (and no, "sensitive" is NOT a bad word!). We have many, many sterling qualities and are viable, productive and useful members of society. We are very loving, kind, compassionate and caring. We are "people" persons, always willing to give and give of ourselves. And these are NOT bad things!

The other good news is that this is a very treatable condition. You do NOT have to relegate yourself to the attic and become crazy Aunt Hattie who no one ever sees. The process is a slow one, but look how long it took you to get to this point! And once the recovery process begins, it too snowballs until your world begins expanding once again.

next: Panic/Anxiety Triggers
~ all articles on living with agoraphobia
~ anxiety-panic library articles
~ all anxiety disorders articles 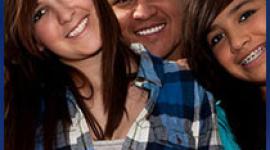 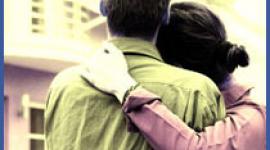 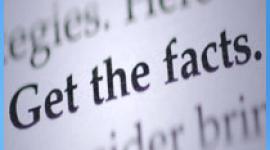 What is a Geriatric Psychiatrist?