Wondering Why: BPD and Suicide

Suicide is one of the most stigmatized topics of a highly stigmatized subject. Quite frankly, we don't talk about it even if we do talk about severe mental illness. This is especially unfortunate for people with borderline personality disorder (BPD), as suicide is sadly common. But the fact that this is National Suicide Prevention Week is a way to start the conversation.

Why people with BPD commit suicide

So how do we deal with this lie?

I've found it useful to keep a journal. The journal offers proof that I've felt other ways. It helps me realize that, as the saying goes, I'm considering a permanent solution to a temporary problem. It's also a good way to express how I feel at the time--in other words, a good way to rant. Sometimes that's all you need.

Talking about it is also a good way to deal with it. In the U.S., if you can't reach your therapist or psychiatrist, you can call the National Suicide Prevention Lifeline at 1-800-273-8255. You can also call 911 and tell them you're having thoughts about suicide, or go to the hospital emergency room. No one should have to suffer alone.

My experience with suicide

I'm in the unique position of knowing people who've committed suicide as well as having attempted it myself. Let me tell you, it's not easy either way.

My friend Matt shot himself while we were in college. Sadly, his death was never discussed. There was never a "don't do this, call for help"; just an announcement of when his memorial service was. There was also no mention of why. Here it is nearly twelve years later, and I still don't know why he did it. I have my theories, but that's all they are--theories. I'll never know why--and that hurts.

I've been suicidal for great lengths of time, and I've attempted to end my life three times. Each time I've been in so much pain I just wanted the pain to stop--that's why I made the attempts. I didn't want to die; I just wanted the pain to stop and death seemed like the only way. Each time the attempt didn't solve my problems; it just compounded them. 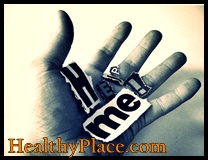 While some suicides occur without warning, most people who are considering suicide give warning signs. According to http://www.suicide.org, warning signs include:

It is a myth that asking if someone is suicidal will encourage them to do it. Asking about it gives the person the opportunity to talk about it, and that's the first step to healing.

APA Reference
Oberg, B. (2012, September 11). Wondering Why: BPD and Suicide, HealthyPlace. Retrieved on 2021, June 18 from https://www.healthyplace.com/blogs/borderline/2012/09/wondering-why-bpd-and-suicide