When the Therapist Just Doesn't Understand

Last week, I met Mel, the crisis counselor from the 10th level of the Nether Regions. Short version: a medication dosing error combined with hormones put me in the Crisis Intervention Unit. Mel's job was to talk to me--and I learned that sometimes counselors just don't get it. She nearly reduced me to tears and I seriously considered asking her to stop talking to me. I left feeling worse than when I went in.

It would be nice if it worked that way. 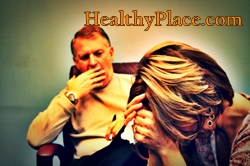 What Mel apparently doesn't know is that psychotropic therapy, a.k.a. medication, is as much art as science. There's a lot of guesswork that goes into the decision process, and that results in a trial and error approach to medicating a person with severe mental illness. One man's meat is another man's poison. In addition to this, sometimes medication stops working and the process starts all over again.

I should have said this to Mel. Sometimes a simple explanation of the facts is all it takes to get someone who doesn't understand to get it.

Mel told me "The hospital is not therapeutic". In some ways I agree and in some ways I disagree. Hospitals are not a long-term solution. But they are great for stabilizing someone who is in a short-term crisis, and that is therapeutic. They are also excellent places to get any difficulties with medication ironed out. That, too, is therapeutic.

It's easier said than done. But it's an invaluable skill for your treatment.

When There Absolutely, Positively is No Hope

My mother has a way with words. She had this to say about Mel--"She shouldn't be in crisis counseling. She is a crisis!"

Sometimes there is absolutely, positively no way in all Creation to make a person get it. What you do from there is your choice.

Because people with borderline personality disorder (BPD) are prone to switching therapists at the first sign of difficulty, I'm not going to recommend finding a new therapist except in extreme cases (for example, I fired a psychiatrist for telling me it was my fault I was raped). Give it a chance. Maybe agree to disagree. Most therapists won't take it personally if you disagree with them. Do what you can to stay in therapy.

Your treatment is ultimately in your hands.

APA Reference
Oberg, B. (2012, September 18). When the Therapist Just Doesn't Understand, HealthyPlace. Retrieved on 2021, May 6 from https://www.healthyplace.com/blogs/borderline/2012/09/when-the-therapist-just-doesnt-understand

Mental illness exhibits many diagnostic and therapeutic challenges, that seriously compromise the appropriate treatment of respective psychiatric patient. Unlike somatic diseases, mental disorder requires a satisfying doctor-patient relation, in order to find out mutual understanding. Otherwise, the treatment process would be incomplete and provisionally as well. Your genuine case confirm this psychiatric useful psychiatric standard. To achieve this therapeutic condition, it ought to be empathic with any patient with mental difficulties anywhere and in any case. Besides this it should to know that in psychiatry we confront with persons with mental disorder and no with psychiatric entity. Therefore, it should to have individual approaching model in daily psychiatric practice, as best way to manage siutable mentally ill patient.