Is Mental Illness the Problem?

The school shooting in Connecticut is a sign that we are way overdue for some adult conversations about mental illness. While Liza Long has started the conversation in her viral piece "I Am Adam Lanza's Mother," not all people with severe mental illness are violent. But she raises a valid question: Is mental illness the problem?

Treatment Barriers are the Problem 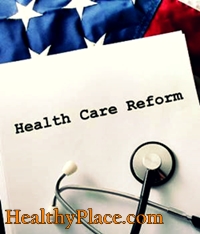 When President George W. Bush commissioned the New Freedom Initiative, the study found that a major barrier to mental health treatment is "unfair treatment limitations and financial requirements placed on mental health benefits in private health insurance”. Simply put, there's a double standard for mental illness. While parity is the law, many private insurance companies have used loopholes to get out of paying for it. This makes mental health treatment difficult to access for people lucky enough to have insurance.

It gets worse the more severe the mental illness. According to the American Journal of Psychiatry, nearly 50 percent of people seeking mental health care are forced to rely on self-payment for treatment. Gina Eckart, of Wishard Memorial Hospital, writes “This is a growing population and it's putting a strain on the community mental health center systems, whose mission it is to serve the seriously and persistently mentally ill. Often patients do not qualify for Medicaid or Medicare because the severity of the mental illness does not meet criteria or the duration of symptoms and impairment of functioning. While troublesome to the individual, the illness is not significant enough to meet eligibility for these federal programs. Resources available to treat those persons with mental health concerns who do not fall into the severe and persistent category are limited.”

Stigma of Mental Illness is the Problem

Satcher writes: “Why is stigma so strong despite better public understanding of mental illness? The answer appears to be fear of violence: people with mental illness, especially those with psychosis, are perceived to be more violent in the past. This finding begs yet another question: Are people with mental disorders truly more violent? Research supports some public concerns, but the overall likelihood of violence is low. The greatest risk of violence is from those who have dual diagnoses, i.e., individuals who have a mental disorder as well as a substance abuse disorder. There is a small elevation in risk of violence from individuals with severe mental disorders (e.g., psychosis) especially if they are non-compliant with their medication. Yet the risk of violence is much less for a stranger than for a family member or person who is known to the person with mental illness. In fact, there is very little risk of violence or harm to a stranger from casual contact with an individual who has a mental disorder. Because the average person is ill-equipped to judge whether someone who is behaving erratically has any of these disorders, alone or in combination, the natural tendency is to be wary.”

Now is the time for a serious conversation about these two barriers to mental health treatment. We need to make it easier to access treatment, and we need to make it acceptable to seek help. We need to treat mental illness the same way we treat physical illness. Because anything that can be done to prevent another mass killing by someone with untreated severe mental illness is worth it.

APA Reference
Oberg, B. (2012, December 18). Is Mental Illness the Problem?, HealthyPlace. Retrieved on 2023, February 3 from https://www.healthyplace.com/blogs/borderline/2012/12/is-mental-illness-the-problem

[…] written before that mental illness treatment barriers are often a problem (Is Mental Illness the Problem?). When President George W. Bush was in office, he established the New Freedom Commission to examine […]

The issues that rise up your article are profoundly crucial in current treatment of psychiatric entities. It is right moment to understand the massage of World Health Organization'statement "Mental health is foundation of personal and community welfare". Such recommendation, on the other hand, requires a radical revision on complex mental health service, as authorizer activity in the psychiatric treatment and management of mental disorder. Unfortunately, there are many discrepancies between last neuroscience achievement and daily psychiatric clinical workout on the treatment of mentally ill patients. To overcome these impediment in clinical psychiatric practice, beside others, psychiatrist and and others mental health professionist should to practice psychiatric treatment by current neuroscience accomplishment. The primary guide line in up to date psychiatric practice should to found on axiom that psychiatry is medical branche, and the material base of psychic disorder is the brain, i.e its disorders. Otherwise, we would to continue to deport under atavistic misconception on mental pathology as demoniac evil performances, with many unpredictable and catastrophic consequences for global psycho-social well-being.

It seems to me that our govt. would do well to make mental health care availability a priority.
If we could get treatment, we might be able to become fully functioning members of society, and able to give back in the form of greater productivity, self-support, and other ways, which would seem to me to be a good investment for the govt., and a people- and Money-saving move, too.

This is very timely for me. I have some problems; I need treatment. I don't have a job and I don't have the money to afford treatment. I can't seem to qualify for financial assistance with treatment, and the one place I can go, if I can afford the payments, will only see me for 30 minutes every six weeks. Which, IMHO, is waaaaay not enough.

Good points! I totally forgot about the fact that the total number of visits are extremely limited by insurance. Many people have to choose a provider that is listed in their plan, who may or may not be the best fit. That is, of course, if you have insurance *and* if the person agrees to go for appointments. A very difficult dilemma indeed...

Did you know that there is a mental health screen that has been medically proven to screen for depression, anxiety, PTSD and bipolar disorder? WhatsMyM3 is the name of the free, anonymous screen and it only takes 3 minutes. This screen was developed by world-renowned psychiatrists and is something that patients and doctors can use together to help people with their mental health issues. This screen also gives patients a MENTAL HEALTH number so patients and their doctors can track and monitor progress. Just go to WhatsMyM3.com.

Becky you have hit the nail on the head.Liza too and I hope the legislators around the world are reading these also the people who work in this field will become strong advocates for change.I know that I am now going to swim against the current in my next statement but someone has to say it, when mental illness is mixed with drugs it makes it more deadly especially since both hard liquor and marijuanna is readily available to these persons too.
I am not advocating that either mental illness or use of hard liquor or ganga cause mass killings, but for that one person who has these conditions to face the potential danger is there. Thanks again Becky and Liza the debate must continue. Thanks to Healthy place and MSN.COM.