The Therapeutic Power of Writing

Recently I had a nightmare. I was in handcuffs and shackles, being transported by police to Richmond State Hospital in Richmond, Indiana, and determined not to go. I consider my time at Richmond State the worst four months of my life, and I don't want to go back. In the dream, I kicked the paddy wagon door--and in real life woke up when my foot connected with my window. Later that day, I wrote about it and realized the therapeutic power of writing. 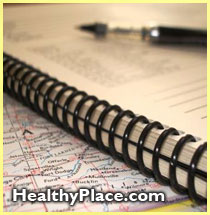 When I was at Richmond State and later Larue Carter, I kept a journal. I updated it almost daily. Looking back on it has been interesting. I was miserable, but I survived. And that gives me hope that I can survive whatever life throws at me.

There were other benefits to journaling. For example, I often made notes of when I saw the psychiatrist (an average of once every two weeks). I also kept notes about my symptoms and what actions I took to deal with them. This made it considerably easier to file a complaint against the psychiatrist when he neglected to treat my suicidal symptoms because "we had another borderline here, and every other word out of her mouth was 'suicide', so we assumed you were the same way'." I was able to say what I felt, when I felt it, who knew what and when.

Another time, I made notes that a nurse had double-dosed me on klonopin. Other patients made similar complaints, which I also noted. Eventually staff asked to see my journal, cross-checked it against hospital records, concluded that the nurse was endangering our health and fired her. My journal helped ensure I got the treatment I needed--and gave me a way to fight for it when I didn't.

Facing the Pain in an Autobiography

I'm currently working on a semi-autobiographical book about the state psychiatric hospital system in Indiana. As I wrote to a friend of mine yesterday, "I never realized how traumatized I was by my time at Richmond State Hospital." It wasn't until I started writing about it that I realized I was still in a lot of pain over what happened there.

Fiction Based on Reality

I love to write fiction. However, much of my fiction is based on reality. Fiction allows me to literally rewrite events.

For example, a novel I'm working on features a character with post-traumatic stress disorder who managed to function in real life. That's about all the two of us have in common. As a teenager, she becomes involved with a vigilante organization, which leads to legal trouble. My character then realizes that she needs help, and reluctantly agrees to intense counseling. She is able to open up with her therapist and slowly make peace with her past.

That's my goal in real life. I want to face and overcome my past. And by practicing it in my mind by writing, I make the transition that much easier.

APA Reference
Oberg, B. (2013, April 16). The Therapeutic Power of Writing, HealthyPlace. Retrieved on 2023, February 2 from https://www.healthyplace.com/blogs/borderline/2013/04/the-therapeutic-power-of-writing

Is It a Spiritual Experience--Or a Psychotic Episode?
When Tragedy Strikes: How to Emotionally Handle Disaster
Sandra L. Flaada
April, 20 2013 at 12:03 pm

I agree with you about writing in a journal. I have 19 journals that I am using to write my experience of therapy and how journalling helped me sort out my emotions and show just what I have to work on. I'm still in therapy after 7 years and I am much better. I want to show others that therapy is not scary. I suffered for 50+ years and I don't want others to wait that long. Our voice is our power. The best to you.

I like this article. I have been thinking about in back into but I don't have the words to write. Wondering if it's so deep inside of me.
I journal as a kid in high school b/c of child of abuse and verbal abuse by my MOTHER. Feel the love there. Thanks for you help. Wishing you success.
Peace and Light

Thanks I need to write more in my journal,but often times ,I dont want it to be boring trash ,Im not diag with BPD I have traits only some symptoms.You just confirmed its ok to write my symptoms and feelings and such.

[...] with my window. Later that day, I wrote about it and realized the therapeutic power of writing. (more…) Defeat Depression Now! Register to Download Your Free Ebook [...]