Relearning How to Be Angry

I'll be honest--I am angry today.

Two weeks ago, I made arrangements to get $100 out of my disability account. The first week, last week, one of my neighbors died, which caused my payee to have to reschedule checks to this week. Today, there was no sign of the check. I am very angry.

Yet I am calm and have not resorted to any negative coping skills. I've relearned how to be angry.

Ask yourself: "Is it worth it?" 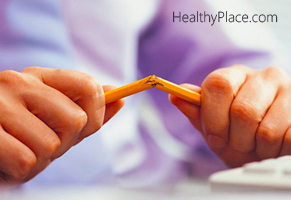 Calm anger does not come naturally to me. I will readily admit to having a temper. That said, I have made progress in learning how to express my anger. Before I react, I stop and ask myself "Is it worth it?"

Look at the bright side

Believe me, this does not come naturally to me. It's taken years of practice to not only say what the bright side of the situation is, but to actually feel it. Saying it is merely the first step.

As I've said, this doesn't come naturally to me, and it probably doesn't come naturally to you, either. Do not be discouraged. It is a skill that gets better with practice. I'm light-years ahead of where I used to be, and you'll make progress, too. Start by saying what isn't going wrong in the situation--for example, I still have my apartment, my treatment team, and my income. There's always something, even if it's as simple as "I have not self-injured/gotten drunk/used drugs today."

This does not mean you'll stuff the anger inside you and let it fester. On the contrary, the first step to accepting life on life's terms is acknowledging your anger. Say to the person--or situation--"I feel angry when my check doesn't arrive on time" or something along those lines. Be honest. Say how you feel and gauge your response. More often than not you'll find that there's a perfectly good reason behind what's upsetting you, or that there's an angle you haven't used to study the problem.

As we said at Richmond State Hospital, "Tell yourself: Just For Today."

Is There a Link Between Violent Video Games and Mental Illness?
Mental Health Patients: When the Right to Privacy Hurts
jamel
October, 21 2013 at 12:42 pm

I'm a recovering addict with 34 months of clean time and I still don't have it under control , but I'm better then I used to be.a day at a time.