Mental Health Patients: When the Right to Privacy Hurts

I'll be honest, I'm a little worried about my neighbors. I live in an apartment complex for adults with severe mental illness; it's one step above a group home. This leads to some quite strange interactions, which raise the question of "When does the right to privacy hurt?"

When Mental Health Symptoms Are In Public 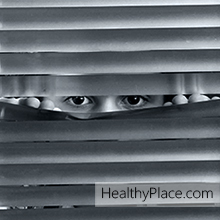 A couple of nights ago, my next door neighbor, James, told a passerby he was going to make him a sexual slave and sodomize him - that's the cleaned up version. This morning, my downstairs neighbor, Rachel, had a blank stare, slack jaw and was talking about how my downstairs neighbor, Herman, needed Jesus because he got into a fistfight. My across-the-hall neighbor, Edward, screams and curses at people for knocking on my neighbor, Hazzie's door.

All of these episodes have been very loud and in public. All of them have disturbed me and sometimes I fear for my safety. Yet, there's nothing I can do about it except tell staff what I've seen and heard. Would my neighbors benefit from further mental health treatment? Probably. But even though their behavior affects me, I have no right to know what's going on because of patient confidentiality. Sadly, even their families have no right to know.

Patient confidentiality is important. But what should we, as a society, do when confidentiality is a barrier to getting appropriate treatment? I'm sure I could help my neighbors function if I knew, instead of having to guess, what their baseline is and how their medication is affecting them. How much more true could this be with their families?

Pastor Rick Warren lost his son Matthew, who had borderline personality disorder and depression, to suicide. His wife, Kay, said that while Matthew had access to good mental health treatment, she and her husband had issues with patient confidentiality laws, laws designed to protect patients. "The right to privacy and that right to autonomy, it's a dance," she said. "I don't have good answers. It's a dance. So we've got to do a better job with that."

I remember when I first started living on my own and was not getting adequate treatment. I disappeared for several days. My mother had no clue where I was and how I was doing. Eventually, she called the hospital psychiatric ward to find out if I was there. I was. I was upset that the hospital had admitted I was a patient there, but looking back on it I'm glad they did. I can only imagine the anxiety my mother must have felt.

My mother's friend has a son, Josh, who has bipolar. Josh also disappeared for several days while in an untreated manic episode. His mother had no idea what to do; I told her to file an at-risk missing person's report and ask that it be put in the FBI database. Josh eventually resurfaced in jail in Colorado. Only then did his mother have a right to force him to get the mental health treatment he needed.

When Should We Intervene?

At what point should we, as a society, intervene in an individual's right to live free? Currently, there are fifty different states with fifty different laws regarding that issue. In Indiana, the family or the state can intervene only when the individual is dangerous to self, dangerous to others, or gravely disabled. But many times people would be better off if intervention were earlier.

So when should we intervene? When does a patient's well-being trump their right to privacy? I don't have an answer, but I'd love to see the issue discussed. What do you think?

APA Reference
Oberg, B. (2013, October 22). Mental Health Patients: When the Right to Privacy Hurts, HealthyPlace. Retrieved on 2022, August 13 from https://www.healthyplace.com/blogs/borderline/2013/10/when-the-right-to-privacy-hurts

Relearning How to Be Angry
Remembering the Loss on Halloween
eleanor
August, 1 2014 at 1:48 am

I am dismayed at your posts about privacy and gun rights.
I think it perpetuates the stigma already associated with mental illness.
I hope you will use your voice more wisely.
The laws that deny a person rights and freedoms when they are a danger to self, others and that means an imminent danger, or gravely disabled are exactly as they should be given the unreliability of the field, prior abuses, stigma, and the fact that most mentally ill sufferers are not any more dangerous than the general public.
Once someone has either been committed involuntarily or been adjudicated as mentally ill then and only then, should they be criminalized and deemed irresponsible by society. (with regard to the gun database).
The unintended consequences of rushing to change laws is a real threat. Lets not add to the suffering of millions of people who will never hurt anyone and are more likely to be the victim of a crime, than a perpetrator.

Without the guarantee of privacy many people with mental illness would forgo treatment all together. If there was a chance that my family might be given access to my records, or even access to a conversation with my treatment team regarding my status I would no longer utilize the resources available to me.