I once remarked that 90 percent of the cases on Judge Judy could be avoided by remembering proverbs such as: "If it sounds too good to be true, it probably is."

An Arabic proverb says: "Proverbs are the light of speech." Proverbs are important even when it comes to mental health treatment. Here are three sayings that mental health professionals would do well to remember.

When I was in Richmond State Hospital, the unit psychiatrist was known for changing medications without telling the patients--even if their medications were working fine. Yes, he did this to me--once. He cut my Seroquel by 100 mg. Sure enough, my symptoms returned, I told him I didn't know what was going on, and he admitted he'd cut the Seroquel.

It gets worse. My roommate was doing well when he changed her meds. It was a disaster--she reminded me of my Grandpa Oberg's last days of his battle with Alzheimer's disease. She wandered around in a daze, her conversations made no sense, and she once came out of the room naked because she didn't know she wasn't wearing clothes. Eventually I had to stop rooming with her because she'd climb onto my bed--which is extremely traumatic for a sexual abuse survivor regardless of whether or not anything happens.

Psychiatric medications are a delicate art. There's a lot of educated guessing that goes on, and many times treatment is trial and error. So when we find something that works, we should stick with it until it's proven ineffective.

If it didn't work the first time, chances are it won't work again. 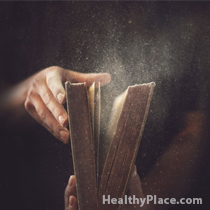 Recently my psychiatrist suggested I go on Depakote. I refused, because the last time I was on it, I had wild mood swings and became so depressed I, literally, could barely move. My psychiatrist then agreed with me that going on Depakote might not be a good idea. Sadly, not all psychiatrists are like that. Some just fail to realize that a medication may not work for a patient.

It's also important to know the side effects of medications, and that side effects may sometimes not manifest until the patient has been on the medication for a while. It's also worth deciding if the side effect is one you want to live with. For example, the Seroquel has caused me to gain a lot of weight--but since it keeps the voices silenced better than any other medication I've been on, I've chosen to accept that I'll be a bit on the heavy side.

This may seem odd seeing as I also say "If it ain't broke, don't fix it," but it actually complements that saying. Change is constant, and medication is no exception--sometimes a med just stops working or works less effectively. This has happened to me, and is a reason why frequently meeting with a psychiatrist is essential. If it ain't broke, don't fix it--but when it is broke, grab your tools and start repairing.

I've been on several different medications. Sometimes one medication will work for a while, then stop. Sad to say, that's normal. That's why we meet with psychiatrists for medication monitoring.

The good news is that medications are constantly changing. Science frequently comes out with a new medication for severe mental illness. That's why it's important for psychiatrists to stay up on the latest developments--today's cutting-edge treatments will become tomorrow's obsolete methods.

So there it is--three proverbs I wish mental health professionals would remember. What do you wish they'd remember?

People Can Change: My Reconciliation with My Family
Reflections on One Year of Sobriety
Dr Musli Ferati
March, 28 2014 at 12:57 am

Unlike somatic diseases, psychiatric entities exhibits many misunderstandings and misconceptual therapeutic dilemmas. Therefore, it is very important to elaborate seriously each observation from psychiatric patient, on concrete psychiatric medications. Otherwise, we risk to damage therapeutic process, with many bad consequences for global health to respective patient. In this direction, the above mention proverbs should be take as useful remark on satisfying psychiatric treatment from any clinical psychiatrist. At the last one, we treat illness people, not oneself disease. On one word, psychiatry isn't only medical science, it is great ability to comprehend patient with intrapsychic difficulties.