Three Ways to Distract Yourself When You Feel Like Self-Harming

Life with borderline personality disorder means accepting the fact that some days will be better than others. Recently, I had a bad day. My therapist has suggested several different ways to distract myself from self-harming in hopes that I can put it off until the urge passes. Here is what's worked for me.

If you've never seen the movie Clue, you're missing out on a cult classic. This movie has lifted my spirits every time I've watched it. Go to YouTube and type "Mrs. Peacock was a man" or "I am your singing telegram" to see what I mean. It never fails--all it takes is one line from the movie and I smile. Maybe you have your own feel-good movie. If you don't, some good ones are Brain Donors, The Radioland Murders, anything with Shrek, The Simpsons Movie and anything by Mel Brooks. 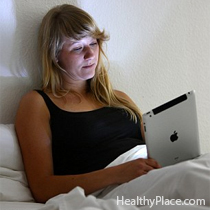 I'm not alone in this strategy. In acting school, we played a game which involved one person repeating the same line in a variety of different ways in an effort to make the other person laugh. This had some basis in reality--our director was having a bad day and in the middle of her vent session, the listener said something funny and repeated it in several different ways until she forgot about her bad day.

Or you may, like me, love childhood classics. I have a small video library, but it includes The Goonies, The Wizard of Oz, and Annie. I remember watching Willy Wonka and the Chocolate Factory about a dozen times over a weeklong period to deal with crippling anxiety.

Is it stupid? Probably. Does it work? Absolutely. As we said in the Army, "If it's stupid but it works, it isn't stupid."

Talk About a Subject that Interests You to Avoid Self-Injury

The more interests you have, the better this works. But even if you have only one or two interests, it will work.

My most recent passion is kombucha. I brew my own, and am constantly researching the beverage's health properties. I also love experimenting in the kitchen to create new flavors--my most recent triumph was pumpkin pie spice: think Thanksgiving in a bottle. I love to talk about it, and talking about it when I'm in a bad mood always seems to lift my spirits.

The object is to feel better--and what better way than by talking about what you love to do?

To Distract from Self-Harm, Escape Into Fantasy

The trick is to do this without dissociating. You have to be into what you're doing, but aware of your surroundings. You have to have your mind in the other world while your body is grounded in this one.

I once heard a story about a child abuse survivor who dealt with the abuse by having an imaginary friend named Mary. She could always count on Mary to love her, to nurture her, and to play with her. As she grew older, she came to believe that her imaginary friend Mary was actually the Virgin Mary, sent to console her in her time of need. I'm not sure which side of the border this borderline delusion is on, but it helped her come to terms with her past.

As I've often said, you have to do what works with you. If it's stupid but it works, it isn't stupid. If it's crazy but it helps, it isn't crazy.

APA Reference
Oberg, B. (2014, July 8). Three Ways to Distract Yourself When You Feel Like Self-Harming, HealthyPlace. Retrieved on 2022, June 25 from https://www.healthyplace.com/blogs/borderline/2014/07/three-ways-to-distract-yourself-when-you-feel-like-self-harming

What the Hobby Lobby Decision Means for People with Mental Illness
What a T-Shirt Taught Me About Group Therapy
Todd @Addiction Solutions
July, 9 2014 at 2:30 am

3 Great tips to avoid self-harm. One should definitely practice this, apart from this they should educate themselves against self-harm.