I am an avid video game player. Recently I discovered Half the Sky Movement: The Game. Based on the book, it educates the player about poverty issues around the world. It's not all sweetness and light--one character is sold into prostitution at age 11, another character has an abusive husband--but it educates the player and offers solutions in the form of charitable gifts. It made me think about offbeat ways people with borderline personality disorder (BPD) can educate others about the disease.

When mental illness is featured in a video game, it's usually the villain who has it. Or it's a setting such as the classic "haunted asylum" (levels I tend to love, no idea why). But what if we made a video game that explores the ups and downs of living with mental illness?

It wouldn't be the first game along those lines. One indie game, Depression Quest, places you in the role of a person with depression. You must make choices regarding your treatment, such as whether to tell your mother you're depressed or whether to keep taking your medications in spite of feeling better. Along the way you learn facts about depression, and you'll see how, based on your choices, some options aren't an option. My favorite: you can't just snap out of it. 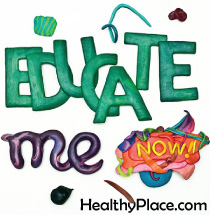 A game featuring a person with BPD could have, instead of a life bar, an emotions bar. Choices you make, such as whether to listen to the people who suggest you go off your medication, could affect the emotions bar. If it gets too high, you have a crisis. Additionally, you could have the option of making bad choices, and watch the consequences. Think "Choose Your Own Adventure" meets National Public Radio.

BPD is not often favorably portrayed in movies. Fatal Attraction is just one example. But some movies do a good job portraying the disorder. Girl, Interrupted features a character who is hospitalized for BPD and eventually recovers.

A movie about BPD could portray a fictional character who has the disorder. Examples include Anakin Skywalker and Tinkerbell, but my favorite is Mother Gothel, perhaps Disney's most loveable villain (Disney and the DSM-IV: Could New Villain Have BPD). As I wrote in that piece:

According to HealthyPlace, the criteria are:

We can use movies to educate others about mental illness, especially the stigma behind it.

I like to write songs, especially songs about dealing with BPD. Music, which often deals with emotions, can be a powerful way of educating people about BPD (3 Songs That Aren't About BPD--But Could Be).

As I wrote about the Meredith Brooks song Bitch,

This song sums up BPD in a nutshell with the lyrics “I’m your hell,/I’m your dream/I’m nothing in between”. One of the symptoms of BPD is black-or-white thinking, which is best summed up as “I’m not good so I must be bad”, rather than the healthy “I have good and bad qualities.”

Another line is “So take me as I am/ This may mean/ You’ll have to be a stronger man/ Rest assured that/ When I start to make you nervous/ And I’m going to extremes/ Tomorrow I will change/ And today won’t mean a thing.” Translation: “Please accept me even at a great personal cost, and please understand my volatile mood swings.” Two more symptoms of BPD are uncertain identity and rapid cycling idealization and devaluation. In other words, a person with BPD might change between today and tomorrow, and might hold you in high regard one day and despise you the next. It does indeed take a strong–or understanding–person to put up with this.

Music can be a powerful educator.

What are some other ways to educate people about mental illness?

Should Pastoral Counselors Be Licensed?
BPD and Three Signs You're in an Unhealthy Relationship
Ed
January, 3 2015 at 10:19 am

A person of immense value to me had an affair that we later determined to be caused by BPD. Main reason for conclusion was fact that this HIGHLY MORAL LADY blurted out that there was nothing wrong with having sex with another man. Totally out of character, as was the affair, & several other things. After caught I knew for an absolute fact that she had just finished copulation as proven by several things including FRESH semen on bed sheet. For the next decade I asked hundreds of times, & she always denied it, even though she KNEW that I KNEW. Two other major lies were obvious. I read that lies are common & also that they are NOT. A major event NEARLY FORCED her to tell after 10 years the truth, but she did so in several steps, each time swearing that that was the absolute truth. Only did positive disproof of each claim did she add another. No more proofs, so I don't know if she is still lying. I'd very much appreciate suggestions or comments.

The title is educating people about BPD. The fact is people with BPD can be working on themselves and getting treatment and they will still have BPD. It's Apr understanding a BPD's shift in thoughts/beliefs. It's true. It takes a strong individual who is patient and understanding of the ups and downs of BPD. This blog isn't a cop out. All books on BPD talk about the other person needing those traits in order to be in a relnship with a borderline.

This blog makes me so incredibly mad. Why should anyone have
A cost to themselves in a relationship. It's unhealthy. If you have a disorder
You need to man up and own it. It's not everyone else's responsibility
To ride that tidal wave with you. People have other weaknesses or inadequacies
They need to run with. It's a disturbing example that you suggest people
With mental illness can just bring all their bad luggage and be done with it.
No, you bring your bad luggage and you work on it the same as someone
Who was fat works on their diet or someone addicted to drugs goes to rehab.
Your issues are not everybody elses to carry. In a relationship it is about
Finding a great person who loves all of you and finding space and drama free
Places for both of you. That is what healthy relationships are. I read this blog
Often, I'm dissappointed.