I recently read an article about a new class of mental health professionals in Kentucky--licensed pastoral counselors. Due to my negative experience with Christian counseling, I am hesitant, but cautiously optimistic. I can understand both sides of the argument, but here's why I think it's a good idea.

I've heard too many stories about someone with mental illness seeking help from a pastoral counselor only to be told that the problem is a lack of faith. It's happened to me. I've also heard too many stories about someone with mental illness being told not to seek "worldly" professional help and committing suicide because they didn't get the life-saving treatment that is available. And I remember my symptoms of borderline personality disorder being chalked up to "demonic oppression." Licensing means requirements--in Kentucky's case, that's "a master's degree in counseling, 1,375 hours of supervised practice, and 250 hours of clinical work and supervision [and] pass[ing] a written board exam." And requirements stop the ability of any idiot from hanging up a sign declaring themselves a counselor. 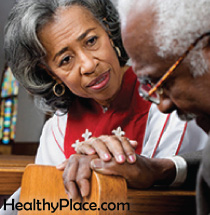 When I first started suffering symptoms of borderline personality disorder and depression, my friends referred me to our church's counseling center. The "therapist" was unlicensed--she had attended a seminar and read a book; those were her qualifications. After my second session, she told me I was "too angry" to work with and not to come back until I was willing to forgive. There was no follow-up. I ended up in the hospital a short time afterwards--and was visited by someone from the church who berated my lack of faith.

When it comes to mental health, ignorance can be deadly. I've heard too many stories about people committing suicide after being told not to seek medical treatment for a very real chemical imbalance. Education is key to eliminating this, and licensing pastoral counselors will mean they have some amount of education.

Licensing Will Ease the Shortage of Mental Health Professionals

Nationally, the shortage of mental health service providers is more acute than other medical areas. According to HRSA, 89.3 million Americans live in federally-designated Mental Health Professional Shortage Areas, compared to 55.3 million Americans living in primary-care shortage areas and 44.6 million in dental health shortage areas. A Kaiser Family Foundation analysis found that the current mental health workforce is only able to meet about half of the nation’s demand for behavioral health services.

Licensed pastoral counselors can ease this shortage, which is expected to become more acute under Obamacare.

When I was in my Introduction to Ministry class, we discussed the rate of sexual abuse by members of clergy. Sadly, it is often covered up--the client is blamed for being a temptation and the pastor is transferred to a different church. Licensing will provide an exterior source of accountability. Licensing provides a "chain of command" and a way to handle complaints when trust is broken, be it by sexual misconduct or breaking confidentiality.

For example, an elder reprimanded me for "demonic influence" and assigned sanctions, which I asked to keep confidential. She agreed, but that night someone else from the church asked how I was taking it--the elder had told her, and I soon learned it was all over the church. Another time someone from the church stopped me in the student health center and said "I hear you're seeing a counselor at the counseling center. Is she a Christian? On fire for the Lord?"

I understand that some people will say that licensing will permit the state to say what a pastoral counselor can and can't do, and that's a valid argument. But some form of regulation is needed. Licensing is one way to prevent further tragedies.

APA Reference
Oberg, B. (2014, September 2). Should Pastoral Counselors Be Licensed?, HealthyPlace. Retrieved on 2022, August 14 from https://www.healthyplace.com/blogs/borderline/2014/09/should-pastoral-counselors-be-licensed

I too think that this is an excellent idea. Mental illness is not a sin problem or a lack of faith. Though I believe faith plays a vital role in recovery hand in hand with medication and a good counselor.

Hi Becky,
I have shared your blog info on my Facebook page and I can totally relate to this post. I went to a very conservative church for 7 years (when I was really struggling with Bipolar, BPD, and Anxiety, and I was told that it was a sin problem and I needed more faith. I went to a Christian counselor in college and also saw my pastor for counseling and it was just horrible! People who "on fire for the lord" scare me because they don't know what to do with people with mental illness. It's definitely NOT a "sin problem"...saying that just makes us feel worthless.

I have seen a lot of people hurt in mainstream churches. Most people think it is a SIN problem, without realizing that mental health drugs do wonders for people and some counsellors on both sides are bad. I like to listen to christian music it lifts me up somehow. I listen to different radio stations, but liscensing sounds like a good idea. Debbie