Are Some Mental Illnesses More Stigmatized Than Others? 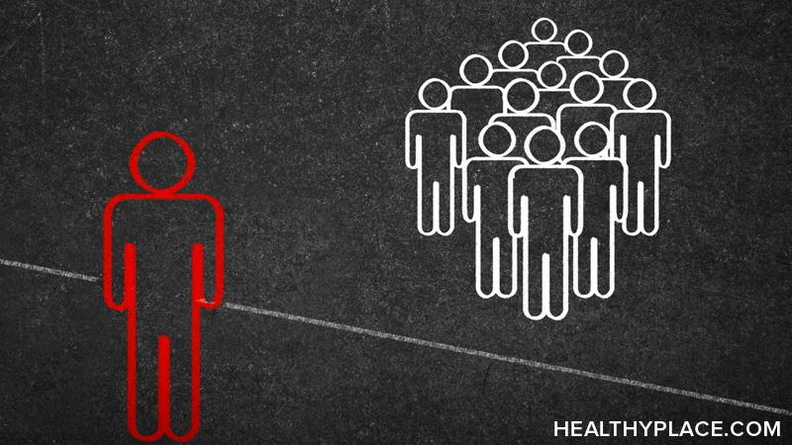 Recently I sat on a panel of mental health consumers. Our goal was to educate people about mental health through drama and a question-and-answer session. When it came my turn to speak, I said that some mental illnesses were more stigmatized than others, fully knowing this would be controversial. Much to my surprise, I saw several heads nodding in agreement!

The Three Most Stigmatized Mental Illnesses

Another person on the panel said that the three most stigmatized mental illnesses were schizophrenia, dissociative identity disorder, and borderline personality disorder (BPD). Based on my experience, I would agree. In journalism, it's okay to suffer from depression or bipolar disorder. Many journalists have come forward about their diagnosis with one of these disorders.

BPD is even stigmatized among mental health professionals. I remember becoming acutely suicidal while at Richmond State Hospital. I told staff and showed them my note--they did nothing. After my attempt and a subsequent battle to see the doctor, I got my answer as to why I was ignored. "We had another borderline here and every other word out of her mouth was suicide, so we just assumed you were the same way."

Even more recently, I was at the hospital to be evaluated for self-harm ideation. The crisis counselor told me "That's your baseline, Rebecca. So what do you want me to do?" 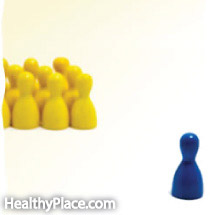 Recently one of my analogies was ruined by Halloween. Some costumes have a "violent psych patient" theme, and haunted mental institutions are also popular. I used to say that we wouldn't have a "violent cancer patient" or "haunted heart disease ward". Then someone came out with the "sexy Ebola nurse" costume.

But the difference is there's been a major public outcry over "sexy Ebola nurse." I'm still waiting for the same outrage over the blatant mental illness stigma.

On the TV show X-Men, a recurring line is "People fear what they don't understand." That's part of the problem--most of our "education" about mental illness comes from the media, not from doctors. As a result, perception is warped.

For example, according to a National Mental Health Association (NMHA) survey,

Sadly, I don't have the statistics for borderline personality disorder.

How to Handle Stigmatized Mental Illnesses

According to National Alliance on Mental Illness of Indiana, Dr. Otto Wahl of George Mason University has the following 10 suggestions:

Fighting stigma is up to us. And we can start by helping people understand that there should not be degrees of stigma toward mental illness.

APA Reference
Oberg, B. (2014, October 28). Are Some Mental Illnesses More Stigmatized Than Others?, HealthyPlace. Retrieved on 2021, June 21 from https://www.healthyplace.com/blogs/borderline/2014/10/are-some-mental-illnesses-more-stigmatized-than-others

Should Psychiatric Patients Have the Right to See Their Files?
A Stigma-Free Halloween
Judy
March, 4 2015 at 5:12 pm

If people want to compare it to any other disease/disorder, rather than a series of maladaptive traits many of us suffer from, just maybe not to the same extreme, it would still be required of the person to figure out what's wrong, accept the diagnosis and then do whatever it takes to heal.
For example, if I find a lump and then find out I have cancer, and I rage at everyone around me, but expect to be excused because I have a disease, I would hope I'd realize that that behavior isn't okay and I can't continue to blame my disease for my behaviors.
It might surprise people with BPD, that those of us in line of fire, often for doing something completely normal like closing the door to the bathroom, not only suffer the rage from such normal actions, but no one believes us if we explain what goes on. That's usually because of the charming exterior the rest of the world sees.
The difference here is that usually the non is not demanding the BPD change. But the BPD is usually demanding everyone else changes. We all have lumps to suffer. Once you start comparing pains, we're on a slippery slope.

This is incredibly frustrating, because, as someone who suffers with BPD myself, I have gone through stages. If someone with cancer rages out on people, it is their responsibility to reap the consequences. Similarly with me, when I have lashed out, I ALWAYS take responsibility, apologize, and see if there is anything I can do to rectify the situation.
I have been in treatment for 6 years, and my disorder almost killed me several times. It broke my heart when licensed doctors and professionals would look at my diagnosis and say, "You are too high risk" or "I don't specialize/treat/deal with BPD".
I find it infuriating when I am blamed for anger that is normal and justified as well.
I honestly regret ever admitting or accepting this diagnosis.

Chris, are you saying there are no mental health workers that will take Medicare patients? If that is so, their bottom line is money and not the patient. For your sake and all others in your situation, I hope you/all find a mental health professional that will care about you more than the money. Good luck and best wishes.

From people with no experience with mental illness I have heard them respond to anything that has "personality disorder" attached as if it is something that is just a flaw of character. They don't see that as a mental illness so much. They don't understand what people with the disorders go through. They tend to think that if the "flaws" were pointed out they could just stop them. It being called a personality disorder creates part of the problem.

I agree with the statement that DID is one of the most stigmatized mental illnesses. It's even hard to get proper care from professionals if you tell them about your diagnosis. Makes just getting by in the world really hard.

I doubt you are a problem in the world. The world is simply problematic.

I have 2 of the 3 and cannot get help where I live. Nobody works with BPD/DID on Medicare. I have given up hope basically. One day, I'll just be gone and be one less problem in the world.