Should Psychiatric Patients Have the Right to See Their Files?

My diagnosis varies, depending on who you believe. I remember one nurse practitioner told me I was too meditative and introverted and must have narcissistic personality disorder--no one backed up that "diagnosis," but it's in my file. I'd love to be able to get it removed. But as a borderline personality disorder patient, I have no right to see my file without my psychiatrist's permission. The same applies to past practitioners' notes. Which leads to an interesting question--should psychiatric patients have the right to see their file?

According to the blog Shrink Rap, patients currently don't have the right to see their records for several reasons:

Most of these are not good reasons. While wanting to view the records does need to be discussed, especially when medical terminology is used extensively and could be misconstrued, denial should not be an option. Typically when one requests records, it's because he or she no longer trusts the doctor to take accurate notes. And based on my experience, that's the point where the psychiatrist isn't taking accurate notes.

Why Patients Should Be Able to See Their Files 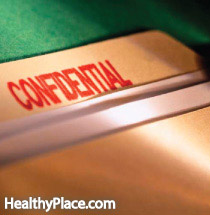 In this age of electronic medical records, accuracy is important. One bad note can derail years of progress. For example, I went to the hospital once because I was vomiting up blood. Someone wrote in my chart that I was "seeking medication." I had to fight for months to get that taken out.

Another person wrote that I tended to "exaggerate the facts." As far as I know, that's still in my chart. It is not true, and it has made it difficult to get help in emergency situations because the professional reads that note and assumes I'm lying. I want to get that out of my file, but I don't know how.

If we had the right to review our files, mental health professionals would be considerably more careful what they wrote down. This would lead to our files being more accurate, which would lead to more effective treatment. And everybody wants treatment to be as effective as possible.

According to an anonymous poster on Shrink Rap:

Psych patients should have the same rights as any other medical patient including the same access to medical records. Hiding behind the 'it's not good for the patient' is a cop out. You could argue that a patient reading SOB in their medical record is going to upset them because they might not understand that SOB stands for shortness of breath, yet that argument is not sufficient for a pulmonologist to keep medical records from a patient. The same rights should apply to psych patients. Those who don't want their records already have the option not to look at them.

Patients Seeing Their Files -- a Compromise

Let's say, for the sake of argument, that we're not going to get the right to review our charts any time soon. What would be a good compromise?

A possible compromise might be to have two or more mental health professionals agree on something before it is put in the chart. In addition, no one but a mental health professional should have the ability to put something in the chart. Let's go back to my "seeking medication" example--that was put in there by a patient advocate with very little mental health training. Were it up to the standard I proposed, it wouldn't be in my chart. And I wouldn't have such a hard time being taken seriously.

The answer is out there if we look for it.

APA Reference
Oberg, B. (2014, October 21). Should Psychiatric Patients Have the Right to See Their Files?, HealthyPlace. Retrieved on 2022, December 5 from https://www.healthyplace.com/blogs/borderline/2014/10/should-psychiatric-patients-have-the-right-to-see-their-file

Should Parents Ever Deceive Their Child to Get Them Psychiatric Help?
Are Some Mental Illnesses More Stigmatized Than Others?
shelley mansker
July, 20 2017 at 1:51 pm

It is clear isn't a good reason to hide them from the person paying the bill. Is there any other service we pay for that we aren't entitled to?

No! It's outrageous!! Psych patients in this country are treated like animals! And apparently psychiatry residensies have difficulties recruiting medical students. Why? Because the medical studients perceive there is very little science to it, and on top of that, the patients don't get better.

[…] This is a good thing–you are entering treatment and you have a right to know what to expect (Should Psychiatric patients Have A Right To See Their Files?). You wouldn’t go to any other kind of medical treatment without doing research into your […]

I am fighting through the privacy commissioner to get mines 2 visits $780.00 for sweet F A, this has to be rectified,our health records are just that ours.

I get concerned their could be mistakes in my file, because I was seeing a psychiatrist once every three months and it was always a new one. My GP who I trust made an honest mistake in my referral letter the other day and if I had not read my letter the doctor I was referred to would have thought I had the wrong illness.
Not being able to see our own notes can destroy trust and it's not true of people with of people with physical illnesses.
"Nothing about us, without us".

I am a Consumer Consultant/Advocate and assit in the area of Mental Health.
As a consumer with Lived experience,I firmly support and Advocate on behalf of consumers to have access to their files. Regardless of whether they be Medical or Psychiatric. In this day and age and the movement to Collaborative Care Planning, it is not only reasonable but a must that Consumers have such access.
The first line of issue as far as relative concerns,
If the Psychiatrist, or any Clinicians having access to Patient/Consumer file, be it for adding notes or instruction, then it behoves those persons to be aware that they are responsible for their language and the manner of their additions.
As for Hurting the feelings, or causing Concern to the Patient/Consumer, once again, it behoves the persons adding information to files to be cognitive of the fact that Consumers/Patients are expecting to
have appropriate treatment from those Clinicians.
Families or Significant Others, in the event of Patients/Consumers of AN INVOLUNTARY NATURE WOULD ALSO expect to have access to files, and therefore expect to be able to read and understand these files.
Any file raised in my name is not a privilege for the Clinician, it is a Document relating to me, and therefore not covered by any Secret code or locked Draw policy. Should there be disputes between myself and the Facility/Clinician, or the possibility of difficulties arising, There would/could be a need to access files(not blacked out sections) in the event of these files being presented to SATS(State Administration Tribunals)or Courts of Law for determination.

I did not get my 300 pages of records until they were archived and no longer at the mental hospital itself.I was a 50 yr old man before I knew my diagnosis and I was never told when I was there at 14.Even then it was seriously a misdiagnosis and even the DSM was different from the diagnosis itself.