Should Parents Ever Deceive Their Child to Get Them Psychiatric Help?

I'll be honest--normally I hate celebrity "news." But one story recently provoked a lot of strong feelings--Amanda Bynes was tricked into going into a mental health facility. It raises a question: Should parents ever deceive their child to get them psychiatric help?

How Amanda Bynes was Tricked in Psychiatric Help

According to TMZ, Bynes' parents worked with a friend to get her to come to Los Angeles. Once in L.A., she used a car service to go to what she thought was a lawyer's office to discuss suing her parents. The driver took her to a building that resembled an office building, but once she was inside, she was restrained and involuntarily committed on a 72-hour hold. Doctors extended the hold to a 14-day detention. 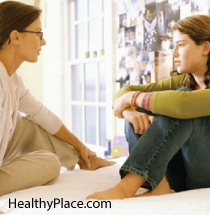 Bynes said her relationship with her parents is "destroyed forever." She's on the women's lockdown unit showing "fits of anger"--and who can blame her? Her parents are seeking conservatorship, and are expected to get it.

The question is basically, "Do the ends justify the means?" And to be honest, I don't know.

According to Mark on TMZ's comments sections:

"A deceptive method to get her to rehab was the wrong method. You're dealing with a mentally ill person who already have major trust issues. This latest stint in rehab will not end well. The psychological damage will take a lifetime to undo. Individuals with personality and bi-polar disorders typically hit rock bottom when they're 'betrayed' by loved ones."

I'm inclined to agree. Once, a therapist thought I would benefit from a hospital stay--I disagreed. She had me escorted over to the psychiatric ward at the hospital and told them I'd pulled out a knife and started cutting on myself. It was relatively easy to prove I hadn't, so I was allowed to go home--but I never trusted that therapist again.

Sometimes people can not rationally see their need for help. Most of the time, however, they can. That's why I, personally, would not use deception to get someone psychiatric help.

To be honest, I don't know the answer to my own question. I personally believe that a person should not be hospitalized and forcibly medicated unless they are a danger to self or others. That said, all I have to do to see the cost of that philosophy is walk through downtown Indy and look at some of the homeless people. Many would benefit from psychiatric treatment, but they're not dangerous, so they go without it. It seems inhumane to have that philosophy.

When I first started having symptoms in high school, I was terrified I'd be involuntarily treated. I believed that my parents were going to send me off to a Christian boarding school for troubled teens. In college, I once hid in my refrigerator because I was afraid the campus police were going to commit me. I was a classic case of a person that deception would have only damaged.

Some people are like that. In such a case, deception will only backfire. It's far better to try to reason with them and be open and honest with them.

How to Involuntarily Hospitalize Someone

I'm technically an involuntary psychiatric patient; I have a court order for mental health treatment. But no one went behind my back to get the order. I was hospitalized one time too many, and I knew I was running out of chances. My psychiatrist came to the hospital, explained what would happen, and advised me not to fight the commitment. Staff at the hospital explained how the court hearing would go and how the transfer to the state hospital would go. Everyone involved in my treatment was honest, which made things go a lot more smoothly.

This is the way it should be done. If involuntary treatment is necessary, say so, and explain why. Don't go behind the person's back. They will only resent you for lying, even if the treatment helps.

Open and honest communication can make or break a person's attitude toward treatment. That's why it's vital not to use deception.

APA Reference
Oberg, B. (2014, October 14). Should Parents Ever Deceive Their Child to Get Them Psychiatric Help?, HealthyPlace. Retrieved on 2021, January 17 from https://www.healthyplace.com/blogs/borderline/2014/10/should-parents-ever-deceive-their-child-to-get-them-psychiatric-help

Why Alcohol Isn't The Answer to Borderline
Should Psychiatric Patients Have the Right to See Their Files?
Kitt O'Malley
October, 26 2014 at 5:41 pm

Thank you for clarifying the difference between deception and involuntary treatment. It is important that people be informed of their rights and responsibilities. Whether when someone is psychotic they can be convinced to enter treatment without coercion of one sort or another is another question entirely. When I was psychotic at 30, I could easily have been convinced to enter the hospital and probably should have been psychiatrically hospitalized. My psychiatrist did not take that tact. He prescribed 3 days of antipsychotic medication on an outpatient basis, with my parents taking care of my physical well-being, and I returned to a more stable level of functioning. I may have received a more accurate diagnosis and proper medication had I been hospitalized at the time. Perhaps there are times when deception is the safest option available. I suppose it all depends on circumstances. I do believe that generally speaking, honesty is the best policy and that being open and honest is ultimately more healing and builds trust.

It's very brave of you to share your story. It made me realize that I was almost an involuntary psychiatric patient. If my life ever plays that black note on the piano, at least, now I know I can still make music.
"We could sing it ya know." (Marilyn Kallet, poet)

This is a hard question. When a loved one is delusional and cannot see that help is in their best interest, it might save their life to go behind their back. My daughter suffers from bipolar 1, and when at her most intense mixed episode she could not understand that she was a danger to herself. If I had to "trick" her to get the care she needed to save her life, I would do it. She thought she was invincible, Jesus's sister, and nothing could or would happen. Unfortunately during this phase she acquired bacterial meningitis, and that stopped her. If I had been able to not let it progress to this, I would have done it. She survived, thankfully, but I can't say what I would do. Sometimes watching a full blown manic episode is just like watching someone shoot themselves, you have to get them help.

Honesty and trust are staples in early foundational levels toward healing from mental health conditions indeed!