Ways to Enjoy Political Activism with Schizophrenia or Schizoaffective Disorder

Several years ago, a good friend hosted a call party for a presidential candidate. A handful of us went to her house, and we called people to make sure they were voting. I 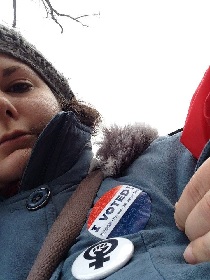 Speaking of voting, I’m very conscientious about that. Just two days ago, I got up early to walk over to my polling place to vote in my state’s primary elections. One thing I could do better – which is totally doable for me and not a lofty goal — is to read up more on the people running for local offices, and not just focus on who is running for president of the United States. Unfortunately, I have to admit, I had no idea who was running for some of the offices. I will educate myself and do better next time.

Another thing that I have the privilege to be able to do is to donate money that can help promote my political and social views. I have also donated money to political candidates and each Christmas I pick a charity I like and donate a larger sum of money than usual to that charity. I have donated to the National Alliance on Mental Illness and to the Rape, Abuse, and Incest National Network, for example. I have also participated in the National Alliance on Mental Illness walk in Chicago. I am able to participate in that because I take the walk with my husband, and he drives us from our suburb into the city. Charities like these promote special interests, so political activism, secondary and quiet in nature, allows me to be politically active and manage schizoaffective disorder.

One of my friends said that she keeps informed on the issues and makes sure she votes, but doesn’t get wrapped up in politics to the point where it makes her feel bad about herself or others. This is probably a good rule of thumb. I have to admit, I sometimes get very upset over politics, and that’s not healthy (Who Asked The Schizophrenic Voices To Dinner?). After all, I do everything I can. But there’s a certain point where things are out of my control. Still, I feel that it is important for me, especially as a person with schizoaffective disorder, to be politically aware because mental health is a political issue.

We, as people with mental illness, need to make sure our voices are heard (Politics And Mental Illness Stigma). Stigma is everywhere and we can help reduce it. At the same time, we need to make sure we’re taking care of ourselves. That’s where drawing the line when politics makes us feel bad comes in. That’s why I don’t go to rallies or protests that would stress me out. That’s why I prefer activism that makes me feel good, like keeping this blog. I love this blog. I have the opportunity to share experiences with you that you may have had too and that so many people know far too little about. With this blog, I am into something I hope is helping other people. Political activism isn't the only type of activism available to those with schizophrenia or schizoaffective disorder.

Self-Care in Schizophrenia, Schizoaffective Disorder Is Hard
I Accept Hearing Voices, But I Don't Like It