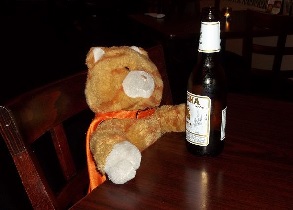 Drinking worsened my schizoaffective disorder by making me depressed. Alcohol is, after all, a depressant. I would get really happy when I was drunk or tipsy but then came the crash. I’ve heard that a lot of people drink more at that point to get “high” again. Well, that kind of drinking is called self-medicating (Self-Medication of a Mental Health Problem). I had to admit I was drinking to self-medicate. Once I admitted that to myself, I knew I had to stop.

I am writing only a few weeks after I stopped drinking. So far, if I’ve wanted to drink, I have just remembered feeling depressed, and then I don’t want to drink anymore.

Explaining Why I Don't Drink with Schizoaffective Disorder

When people ask me why I’m not drinking, do I tell them about my schizoaffective disorder? I was such a light drinker that when I went to parties sometimes I wouldn’t drink. People would ask me why I wasn’t drinking. Not to sound arrogant, but it always seemed to be some pushy guy who was disappointed I wasn’t getting liquored up.

I don’t think it’s anyone’s business why I’m not drinking, so, no, I didn't answer the question. I’d like to think of some really quirky answer to the question that will make the inquirer feel guilty for having asked but I haven’t thought up a good line yet.

I Don’t Miss Drinking Like I Wouldn't Miss Depression

I quit smoking cigarettes almost five years ago, and I still miss that like crazy. But when you’re tipsy, you’re incapacitated. I wouldn’t let myself post anything on Facebook or shave in the bath if I had been drinking. So, really, not drinking is liberating. Plus, alcohol is expensive, especially when you order it at a restaurant.

Before you brand me a total weirdo, I do have my vices. I’m a sugar-holic, which is really bad with the schizoaffective disorder medications I’m on. But I give myself a break because I miss cigarettes so damn much and I live with suicidal ideation. When you live with something as deadly as suicidal ideation, you need to keep your wits about you so you don’t do something rash—like, say, kill yourself. This is another great reason not to drink.

These days I get a high from taking dance classes. If I need to calm down from a panic attack, I take tranquilizers—another reason I shouldn’t be drinking. Long ago, I used to smoke pot, but it made me paranoid. So that’s off my list, too.

I don’t get all huffy or preachy when someone offers me a drink. I just say, “No, thank you.” And if someone asks me why, well, I’m still searching for the perfect soul-shattering answer to that question, because our schizophrenia or schizoaffective disorder is nobody’s business, unless we want it to be.

How I Stopped Self-Medicating Schizoaffective Disorder with Alcohol

Dear Anne,
Thank you for your comment. I'm glad you enjoyed the article! You're welcome! :)
Take Care,
Elizabeth

I have bipolar and stopped drinking in 2001 when I was diagnosed. I do miss it, but I really want to stay as stable as possible, so I don't drink. I've learned to just let people think that I've never drunk, when I tell them that I stopped 15 years ago, they act as if it was something heroic, but I didn't have any really great difficulty stopping. I just believed what I was told and read about it causing mood stability and I wanted mood stability more than beer.

Drinking beer elevates my anxiety and paranoia. Jogging reduces it. I quit the daily klonopins, but maybe I should go back.