Alcohol is well-known for its disinhibiting effect on people, and many people believe a drunken person's behavior can quickly change from being a bad choice to alcohol-induced behavior (Short-Term, Long-Term Effects of Alcohol). A video of a Miami doctor raging against an Uber driver over the weekend has gone viral. Dr. Anjali Ramkissoon, suspended from her job due to the video, implores other people to learn from her actions. She has accepted responsibility, acknowledged that she acted inappropriately, and now begs for forgiveness, stating that her behavior was grossly out of character. Dr. Ramkissoon does not, however, seem to acknowledge the role that alcohol may have played in the incident, which appears to be the teachable lesson in this situation (What Is Alcoholism?). Learn how to determine when a person's behavior goes from simply being a bad choice to alcohol-induced behavior, and what can be done to prevent similar incidents in the future.

In an earlier blog post, I talked about Forgiving Yourself for Embarrassing Drunken Behavior, which focused on dealing with the aftermath of a night similar to Dr. Anjali
Ramkissoon's outburst on the streets of Miami. Watching the video of the Miami doctor, I was forcibly reminded of my own drunken rages where I acted out of character and physically attacked friends of mine. Acts of violence while intoxicated do not necessarily equate to alcohol addiction, but they certainly fall under the Behavioral Signs of an Alcoholic exhibited by many individuals with alcohol addiction. 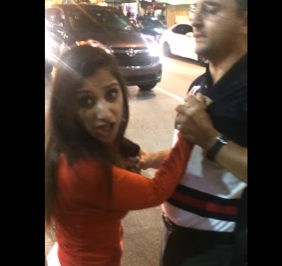 Bad choices happen when we are in full awareness of our actions and choose to take them despite knowing there are risks and potential for consequences. Alcohol-induced behavior is characterized by a person who can truthfully assert they would not normally have behaved that way when looking back on an incident. It can happen any time a person has been drinking; the quantity of alcohol consumed is irrelevant.

Under normal circumstances, it seems that the neurologist would not have acted out as she did in the video. In an interview on Good Morning America, Dr. Anjali Ramkissoon stated that, "Anyone that knows me, they see that video and they say, 'That's not you.' And really, it's just not me."

In her interview, Dr. Ramkissoon also cited some personal struggles she experienced that day and glossed over the fact that she had been drinking. She framed the situation as a bad decision that she made because she was upset. But if her tantrum was simply a bad decision, how can she claim that her behavior was not indicative of her nature? It seems she should stick with one explanation or the other, but not both.

When asked how she could get her job back in the Good Morning America interview, Dr. Anjali Ramkissoon replied, "I think the best thing as this point is to just take responsibility for what I've done. I did it, and I'm ashamed of what I did. This would never happen again."

Since it was uncharacteristic of her, some might agree with this promise, that Dr. Ramkissoon's incident with the Uber driver will never happen again.

Personally, as an individual who repeatedly made uncharacteristic choices while drunk, I have a different perspective. After each violent episode, I swore to myself that my outbursts were isolated incidents that would never happen again. Then, inevitably, I would get into another fight. It might not have occurred for several days, weeks, or even months, but it always happened again. I didn't get into fights every time I drank, but every time I got into a fight, I had been drinking.

My violent episodes and alcohol-induced behavior were what led me to question my relationship with alcohol. Thanks to those events, I realized that I am someone who cannot reliably predict what will happen after I take my first drink. In my situation, and for anyone who has lost the power of choice over alcohol, the only solution is to quit alcohol entirely.

I am not in a position to diagnose Dr. Anjali Ramkissoon, and I cannot presume to know the nature of her relationship with alcohol. For the time being, it is definitely best that she remain on administrative leave from Jackson Memorial Hospital in Miami.

yes, alcohol can have strange effects on peoples behaviour, ive been thru it as well.

All of my moments I regret are when I drank too many beers. Alcohol can control someone.