One Year After My Dissociative Identity Disorder Diagnosis

Every person copes with a DID diagnosis in different ways, and there is no right way to cope. Not every person accepts a diagnosis right away. Denial can continue for weeks, months, or years after receiving the diagnosis.

Part of the treatment for DID is working through the trauma that you and your parts have experienced through therapy. When you have DID, therapy isn't a short-term commitment; it can take years. Therapy is helpful for working through trauma and learning to work with your parts , but it involves a lot of emotional hard work. There will be setbacks. There will be times when you need to take a break, and that's okay.

My Experience Living with DID One Year After My Diagnosis 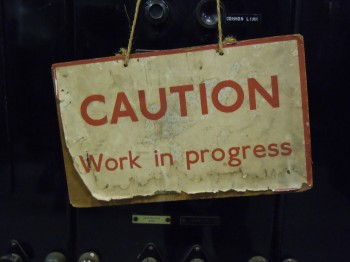 I was officially diagnosed with DID in August 2015. Now, more than one year later, I can say my life is different. I go to therapy twice a week, every week. I spend my free time in online support groups. I write about DID on this blog every other week. I even got the opportunity to share part of my story in a book about DID.

But I am also struggling more than ever. It's still hard for me to accept that I have this diagnosis. I still tell myself the abuse didn't happen to me. I still grab hold of a fantasy life, a life in which I was never hurt, a life in which I say "I'm okay" without knowing it's a lie.

My system is still chaotic. I try to work with my parts; I try to communicate with them. It's overwhelming. I thought I had just a few parts -- that I could handle. But as I started working with them more, I realized that my system was a more complex than I originally thought. I still don't know where I end and another part begins.

My therapist and I are just now starting to work with the specifics of my DID. That's because I've had moments when I struggled with stabilization; I wasn't practicing self-care. I've narrowly avoided hospitalization and intensive treatment. While I am stable now, I worry about when I will fall back into dysfunction again.

You Can Manage with Your DID Diagnosis, but It Takes Time

There is no cure for DID. Whether you choose to integrate or to remain a multiple, your DID doesn't disappear -- you just learn to manage it better. No matter how you decide to manage your DID, healing takes time.

For those who are still struggling with DID a year after diagnosis, or even 10 years after, you are not alone. It's okay to want to deny it. It's okay to be stuck in therapy. It's okay to feel confused, scared, or frustrated. You are a work in progress.

Hi my name is Jay I suffered a complete disassociate fugue almost four years ago I lost my memory back to 8 years old I've gained most back but have massive memory issues. I'm also a 100%disabled veteran US Army Airborne Infantry. I have come to find out that I was suffering from PTSD from childhood trauma before I ever went to war and was seceptible to combat related PTSD more than most and lucky me I ended up damaged physically and mentally after the war. I always knew there was another "person" in me I would loose time, wake up in strange places wearing different clothes it's been happening for decades. However I had no real idea how bad it really was or what it really was until I was recently diagnosed with DID by a shrink that has 30 years in the field and is now working with me to hopefully get to a place where I can work on the trauma that I can't remember some of my alters know what's happened to me but they won't tell me. They have told my doctor and my wife knows a good bit but I myself do not. Every time it comes up and I get too stressed my strongest alter jumps in and takes over and won't let go until the danger of me hearing about my past is gone. I have 4 alters for sure and maybe another I don't know, there may be some overlap. It seems that my alters have become much more active since I've been in therapy or I just didn't notice as much before I'm not sure. Did this happen to you as well? I've started an alter journal and so far three of my alters have written back and forth with me in it. I can't hear them in my head they don't talk to me like that. Do yours talk to you? I have seen YouTube videos where people can call out there alters at the drop of a dime I can not do that either it just happens they do what they want. The most powerful Turge takes over often he is my protector he has no age but we suspect he is roughly my age 46 or so BJ is 8 or 9 and his job is like the canary in the mine shaft he notices trouble and causes massive adrenaline and anxiety which alerts the watcher. The watcher is completely 1 dimensional he or it rather has no age gender or feelings he is the one with the memory of everything and is kinda the gatekeeper to the outside he decides who gets out and when I guess this is all still new to me. He writes in tiny print I know I'm the one that actually writes it however it's too small for me to read so as of yet I don't know what he has written in our journal past what I let my doctor read to me. My wife was actually able to get Turge to go back in and let me come out again today which doesn't happen often sometimes he refuses to go and stays as long as he can but he's usually gone in the morning but not always. Anyway I know I've been rambling on now so if you can give e me some answers I don't yet know I would greatly appreciate it