The Unique Needs of Men with Addictions

Real men don’t cry. Be the strong silent type. Don’t be a wuss.

Starting when they are boys, men are bombarded with messages about how to “be a man.” Often these messages are filled with imperatives to be like a rock—unemotional, isolated, self-sufficient, and immovable. To varying degrees, men internalize these values and judge themselves according to how well they measure up. Unfortunately, though, attempts to live up to these values can have disastrous results. 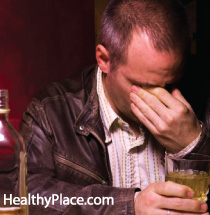 In his book, Unmasking Male Depression, Archibald Hart, PhD, discusses the insidious nature of male depression and addiction. Dr. Hart refers to addiction as a “mood bath” for men, a balm that eases the strains of stress and having to be masters of stoicism. He discusses a connection between depression and addiction, noting that often addictions arise out of undiagnosed depression. Given that men are told to remain stoic, however, their addictions grow in secret. The desire to keep addiction hidden isolates men from others and makes seeking help seem all but out of the question. After all, if they seek help, men are supposedly no longer the rugged, unflappable bastions of self-sufficience that they are told to be.

The truth, however, is that healing can be found in the one place men are told not to look: in the company of others.

The HBO miniseries, Band of Brothers, is a powerful and poignant look at the struggles of Easy Company, a group of World War II paratroopers fighting during the invasion of Europe. The miniseries taps into a fundamental part of the male psyche, which is the desire to band together into groups to achieve a common purpose. Many men are drawn to settings where groups of them can work together to overcome a common obstacle or to compete against a common foe, whether it be in the context of a new business venture, sports team, work crew, fire team, or any other of a number of different team contexts.

In a 2010 article published in the Journal of Psychotherapy Theory, Research, Practice, and Training, Mark Kiselica, PhD, and Matt Englar-Carlson, PhD, write about the unique ways men relate, and one of the particular strengths they point out is how men tend to thrive in group settings. Groups have been a fundamental part of addictions treatment since the earliest days of Alcoholics Anonymous and 12-Step programs. In fact, it was a group of men coming together to combat alcoholism that gave rise to the movement in the first place. Treatment groups provide a unique opportunity for men to experience healing in a context that is congruent with their natural inclination towards group activity.

It is a tragic irony that the thing men are told to stay away from—seeking out help from others—is actually the one thing that has the greatest potential to help them heal. Although stepping out and asking for help may seem like a show of weakness, it is actually the strongest and most courageous decision a man struggling with an addiction can make.

APA Reference
Poling, R. (2015, July 22). The Unique Needs of Men with Addictions, HealthyPlace. Retrieved on 2022, May 21 from https://www.healthyplace.com/blogs/mentalhealthtreatmentcircle/2015/07/the-unique-needs-of-men-with-addictions