October is one of our household's more hectic months. My biggest time consumers are Bob's birthday and Halloween (our favorite holiday). My birthday gets thrown in there somewhere (I refuse to cop to when or which one it is). There are about umpteen school "holidays" when the kids are home. And, of course, there's that day that strikes fear in the hearts of parents and children alike...

Parent/Teacher Conference Threw Me For A Loop 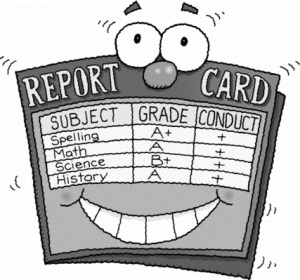 I've been to several of these--some in preschool and three at this particular school. Now that Bob is in third grade, I can almost recite my parent/teacher conference verbatim.

He has such a sense of humor...

He's very creative--and that's great--but sometimes he ignores the assignment instructions entirely and takes it to a complete other level.

He does have some problems staying with the group...

He doesn't have a lot of patience...

...and so forth. I can also, in Carnac the Magnificent fashion, hold his envelope-clad report card to my temple and announce what's on it--Ms ("mastered") and Ps ("progressing") in every assessment area, except the one called "Behaviors that Promote Learning", where he receives almost all Ns ("not making adequate progress"). If one quarter happens to earn fewer Ns in that area than the previous quarter, I consider it progress.

This year, I was thrown for a loop.

My Child is Progressing

The report card came first. Thinking I already knew what was inside, I didn't rush to open the envelope. When I did, I had to look over it twice to make sure I wasn't missing something.

Not. One. N. None. Not a single one. (Well, okay--a single one, from his art teacher, who he's been butting heads with since kindergarten, so I mostly ignore her.) 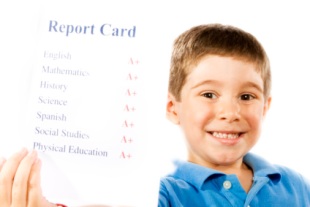 At first, I thought maybe his teacher must be very easy-going. Or she's one of those who feels sorry for Bob and can't bear to tell the truth about his lack of social skills. When I met with her later that evening, however, I started to think otherwise. Certainly Bob still has his quirks and his shortcomings, but for the most part, he is showing improvement. While he still prefers to work alone a lot of the time, he's more receptive to staying with the rest of the class. With his teacher's help (giving him advance warnings), he's better able to handle transitions. He's making (and keeping) friends.

I didn't know what to say. I'm used to playing defense and explaining why Bob does the things he does--not being told how great he is.

But really? It was wonderful. I wouldn't trade that feeling for the world.