It's the last week of January, and there's a whole lot of crazy goin' on. In Bob's case, particularly, he is climbing up his usual mid-winter spiral into mania. It's frustrating. Throw in some miscommunication among treatment providers and it becomes downright maddening.

Last January, Bob's psychiatrist opted to take a proactive approach--rather than wait for Bob's mania to fully develop and spin out of control, she increased his lithium and Seroquel doses within the first few weeks of his behavior changes. It worked--Bob not only made it through the rest of winter and spring without any "Boblems" (as we have come to call them), he flourished. 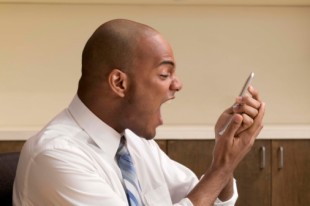 In the fall, when Bob's mood fell into depression with severe paranoia, Bob's labs indicated his lithium levels were pretty well maxed. He was also topping out on his Seroquel dose. I opened my mouth and heard my worst fears vocalized--what happens when this combination stops working? What then? We decided to recheck his lithium level prior to his follow-up appointment and go from there.

Since right around Christmas, I've watched Bob morph from sad and lethargic to irritable and hyper. He no longer has to be awakened in the morning; he has to be told to go back to bed because it's only 4 a.m. In the past few weeks he has become more and more defiant and angry, and we're seeing behaviors we haven't seen in over a year. I took him in for labs and waited on pins and needles for his appointment the following week.

Of course, the lab neglected to fax the results to the psychiatrist's office, despite the clearly-written directive and fax number on the order. Without a current lithium level, the visit was more or less a waste of time and money. And more time wasted in getting Bob's mood back in check. More time for him to struggle unnecessarily at school. More time for us all to struggle at home. All because of one simple miscommunication.

It makes me want to tear my hair out and scream.

I understand no one is infallible (not even me, though I may publicly claim otherwise) and humans make mistakes. What angers me no end is the fact this mistake has cost my son time--time lost from his childhood and given over to his symptoms. Time lost from our family and handed over to uncontrollable energy and irritability.

Unfortunately, it is what it is. All I can do is fume internally, continue my calls to the lab, and...wait.

Blended Families and Children with Mental Illness (2 of 2)
Are Long-Term Risks Worth the Benefits of Bipolar Treatment?